Of course it would be “islamophobic” to point out that the man was Muslim. I am not sure that there are very many Christian Somalis.

Man storms into Tongan church in Auckland and starts yelling 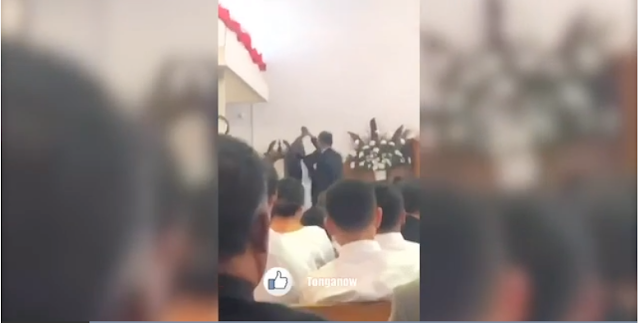 A North Shore couple were scared and shocked when a man stormed into their church and began yelling "Jesus Jesus" and pointing at a cross during a religious service.


North Shore couple Jenny and Samuel Kaufononga were at Free Wesleyan Church of Tonga in Mt Roskill along with their children and nieces and nephews when the incident happened on Sunday afternoon.


But it had left them so shocked and scared, they would no longer attend the church's sessions, which they would go to once a month.


Samuel Kaufononga said he was standing at the front door when he noticed the man walking up to the church from the road.


Kaufononga said while they were talking he patted the man down in case he was carrying any weapons.


However, before he knew it the man was kissing his hand and then pushing him to the side and running in the church.

Inside, Kaufononga's wife, Jenny, was sitting with her eyes closed as Reverend Atumaisa Siale was holding sacrament - a time when no one in the church is allowed to stand, let along approach elders of the church.


She said she felt the man's clothing brush past her then opened her eyes to see the man walking up to the elders at the front, yelling "Jesus, Jesus" and pointing to the cross on the wall.


Reaching the Reverend and others at the front, the man began kissing their heads and trying to shake their hands, leaving parishioners - including the Reverend - in shock.
She said people were initially reluctant to step forward due to the sanctity of the ceremony taking place but a man eventually grabbed him and tried to walk him out.


Once outside, the man started "screaming Somalia, Somalia".


"He then turned around and said 'Somalia and Tonga are one'."


After saying he would leave he then returned and started shaking people's hands again.


She was also upset to hear the man playing music while outside.


Jenny Kaufononga said the whole incident was "weird" and not something that had ever happened to any of them.


She learned afterwards, the man had also gone into the adjacent hall - where women were preparing food for after the service .


Given what had happened in Christchurch everyone was left shaken.

She felt the man's actions were mocking their beliefs.


"Still, my concern is, what was he doing in there?


"We are very shaken by it ... it's a very big thing for us. Everybody is still angry that he disrespected everything. He didn't even care, he just walked in and did what he did and people were shocked ... He was kissing the Reverend on the head."

After ignoring requests to leave the church, one of the "strong men" escorted him outside.


She now wanted police to take the incident seriously as "this is not a small thing".


"I would really love for the police to talk to him ... I know there's more to it than just walking in and yelling ' Jesus, Jesus'. That's not normal ... he looked like he was mocking our beliefs and to do that is very rude and disrespectful."


A police spokesperson confirmed police were aware of "an incident involving a male interrupting a church service" in Mt Roskill on Sunday.


"The male was escorted from the church by a congregation member.


"Police have looked into the matter and identified the male and are confident no offence was committed and that there was no cause for concern regarding the safety of congregation members."


Police continued to encourage anyone who saw suspicious behaviour, or who at any point felt unsafe, to contact police immediately.