Russian President Vladimir Putin appears set to visit the East Siberian region of Zabaikal on Thursday as massive wildfires there have forced residents to evacuate their homes.

The fires, which have continued for more than a month, have left 34 people injured. Ninety-nine homes have caught fire, while nearly 50 thousand residents have been forced to evacuate.

The Russian presidential office says Putin will head for the region's administrative city of Chita for an emergency meeting prior to his summit with North Korean leader Kim Jong Un in the Far Eastern region of Vladivostok.

The meeting will also be attended by the Minister of Civil Defense, Emergencies, and Disaster Relief Yevgeny Zinichev.

Participants plan to confirm the extent of damage and discuss how to put out the fires and support disaster victims.

Putin is expected to hold his first talks with Kim later in the day. The presidential office spokesperson said the meeting will likely take place in the afternoon. 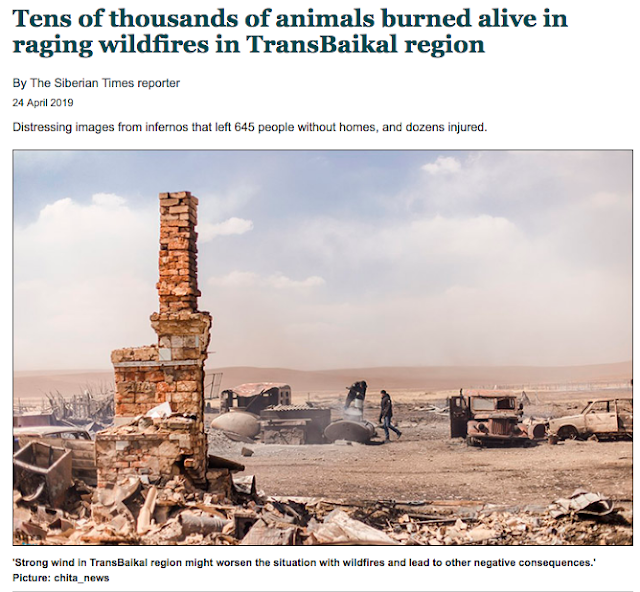 The cost of the recent fires has been revealed as Vladimir Putin today visited TransBaikal to assess the damage en route to a summit with North Korean leader Kim Jong-Un in Vladivostok.

Some 11,800 livestock - including at least 1,277 cattle plus 489 horses - were destroyed, many of them roasted alive or killed after suffering terrible burns, according to various reports.

By The Siberian Times reporter
19 April 2019
At least 90 left homeless in one village after raging infernos, say reports.

'Strong wind in TransBaikal region might worsen the situation with wildfires and lead to other negative consequences.' Picture:
chita_news
Spectacular steppe wildfires duelled by strong winds are threatening a
growing number of villages in the remote Siberian region with at least
150 people estimated to be left without homes.

In Ust-Imalka village, more than half of the 66 residential buildings have
been destroyed by the fires.

The latest figure was 34 razed in the inferno. The region is covered by thick
palls of smoke from the out-of-control wildfires.

'Firefighters from (regional capital) Chita are heading to the village but it is at least a six-hour drive,’ reported local news website Chita.RU

'It makes things harder that there is no [mobile] network coverage.’

Around 90 people lost their houses in Unda village in Baleysky district.

They have been given temporary accommodation in a local 'House of
Culture’.

Around 90 people lost their houses in Unda village in Baleysky district. Pictures: Region-75, chita_news
The wildfires have also been registered around Krasnokamensk and Tockhin villages.

There is likely worse to come.
‘Strong wind in TransBaikal region might worsen the situation with wildfires and lead to other negative consequences,’ warned the local Emergencies Ministry.

Acting governor Alexander Osipov assigned acting minister of labour and social care Evgeny Kazachenko to assist people whose properties were damaged in the wildfires.
'Those who lost their housing will be provided with social housing,’ he said.

'Acting deputy head of the regional government Andrei Gurulyov and head of civil security and fire safety department Fyodor Kurguzkin have been dispatched to the site to employ emergency measures and provide assistance to population in Ononsky, Olovyanninsky and Baleysky districts.’

Satellite images of fires. Picture: Tayga.info
According to satellite images, wildfires are burning in South TransBaikal.
Residents of Chindant village in Borzinsky district  are also publishing videos showing wildfires in the village.
TASS reported that a state of emergency had been introduced in the region.
Spectacular steppe wildfires duelled by strong winds are threatening a growing number of villages in the remote Siberian region. Pictures: Region-75, chita_news

Posted by seemorerocks at 09:13