In recent weeks I have been taken up with cascading events, starting with the shooting in Christchurch and more lately with the terrorist attack in Sri Lanka and quite frankly, in a state of shock.


I hope as things warm up in the Ground Zero of abrupt climate change – the Arctic – I can now devote more time to monitoring the changes in realtime.

I’ve been sharing my work primarily on my YouTube channel and my Facebook page. However, with coming censorship, I’ve established a new, safe and secure platform on Subscribe Star. I will be transitioning to this page more and more. I suggest you visit my Subscribe Star page, bookmark it, join and get familiar with it now, before anything happens to my present platforms. Margo – The Scientific Empath on Subscribe Star:

Time is short - get your spiritual houses in order.
God bless everyone.
Power to the Truth! Peace,
Margo

If you've not seen my background videos on methane, sulfur dioxide or ozone, here are the links: Global Methane Forecasts (April 28, 2018): https://youtu.be/76T1w7pFWRo


Here is my own brief synopsis of what I see 
This spring in Alaska has been more like summer, or like the same season for somewhere much warmer. What it has not been like is the usual March and April above the Arctic Circle. The consequences are being felt in devastating effects on the local wildlife, but are taking a severe toll on humans as well.
In March the average temperature of Kotzebue, on the north-west coast, was -5ºC (23ºF), 12ºC or 21.9ºF above normal. The rest of northern Alaska was not far behind. The Alaska Climate Research Center (ACRC) reports this is 4.1ºC (7.4ºF) higher than the previous March record, and the majority of the state had its warmest March ever.
People from the rest of the world, used to temperatures without a negative sign in front, might think this sounds like an improvement, but the consequences have been severe for a region built on the confidence of when there will be ice.
Two people driving on the normally frozen Kuskokwim River fell through insufficiently thick ice with their snowmobiles and died of exposure, a third barely survived. Thankfully so far the number of deaths has been low, but many remote communities depend on supplies delivered via ice roads. Increasingly people may be forced to choose between starving and risking the stability of the ice. Meanwhile, sled dog races, including the famous Iditarod, have been canceled or rerouted.
The warmer temperatures are connected to, and partly resulting from, the loss of sea ice in the Bering Sea. On the other side of the Bering Strait, the same sea ice is the reason members of the world's largest walrus colony are dying falling off cliffs in one of the most harrowing moments of David Attenborough's new Our Planet series.
Last year the Bering Sea had just 10 percent of its normal April sea ice. This year the ACRC reports things are worse so far, a fact made visible in NOAA photographs.
Climate change models have always predicted warming caused by increased greenhouse gases would be fastest at high latitudes. Changes brought about by natural causes such as extra sunlight would be greatest elsewhere.
And yet, as the overwhelming evidence the world is warming at unprecedented rates piles up, deniers are getting more shameless. Blogs, lobby groups, and even some mainstream news outlets have taken up claims the walruses Attenborough highlighted were killed fleeing polar bears, rather than in response to global warming.
The makers of the documentary have hit back, exposing the disgraceful lies being perpetrated. Not only does the film crew, who – unlike those who started the claims were actually there – say no polar bears were sighted, but we have multiple peer-reviewed studies showing walruses prefer to rest on sea ice, rather than land, and would not normally be on these cliffs. 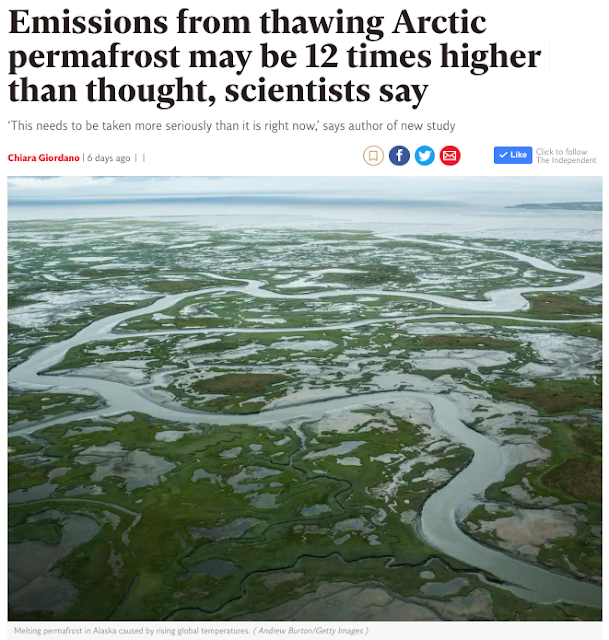 Emissions from thawing Arctic permafrost may be 12 times higher than thought, scientists say


Emissions from thawing Arctic permafrost may be 12 times higher than previously thought, scientists have discovered.

Permafrost is a mix of soil, rock or sediment that has been frozen for at least two years which is mostly found in the uppermost areas where temperatures are rising more quickly than the rest of the world.


When it thaws because of global warming, it releases large quantities of carbon dioxide and methane into the atmosphere, causing temperatures to rise and creating a perpetual cycle where more permafrost melts.


Nitrous oxide, a third greenhouse gas nearly 300 times more potent than carbon dioxide, stays in the atmosphere for an average of 114 years, according to the Environmental Protection Agency (EPA).

The dead sea: Global warming blamed for 40 per cent decline in the ocean's phytoplankton