US threstens UK over Huawei 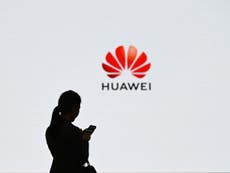 The US may withhold intelligence from the UK if Theresa May’s government uses Chinese firm Huawei to build its next-generation mobile internet infrastructure, an American official has suggested.
“It is the United States’ position that putting Huawei or any other untrustworthy vendor in any part of the 5G telecommunications network is a risk,” said Robert Strayer, the deputy assistant secretary for cyber, international communications and information policy at the US state department.
“If other countries insert and allow untrusted vendors to build out and become the vendors for their 5G networks we will have to reassess the ability for us to share information and be connected with them in the ways that we are today.
“Exactly how that will be done will depend on the risk of the equipment that is put into the networks.”
Mr Strayer was speaking during an online press briefing on Monday.
His remarks come in the wake of Theresa May reportedly approving plans to have the Chinese company build non-core parts of the UK’s 5G communications network.
The official said that the US did not distinguish between core and non-core elements and instead believed that there was no safe level of involvement for Huawei.
“Having potentially compromised equipment and software provided by vendors in any part of that network is an unacceptable risk,” he said.
“It is our position in the United States that there is no way that we can effectively mitigate the risk of having an untrustworthy vendor in the edge of the network.”
Huawei’s role in building the UK’s 5G network has divided Westminster in recent weeks.


There are concerns about whether the technology giant poses a threat to national security.
US intelligence has suggested that Huawei is directly funded by the Chinese security services, according to The Times.
In Whitehall an inquiry is under way after details emerged of a highly secretive National Security Councilmeeting at which Ms May reportedly gave the green light for the Chinese company’s involvement.
Multiple cabinet ministers were reported to have objected to the Huawei decision, including Jeremy Hunt, Sajid Javid, Gavin Williamson, Liam Fox and Penny Mordaunt.
They have all denied providing the details of the meeting. Cabinet ministers have been warned of the possibility of a criminal investigation into the leak.
On Monday, Jacob Rees-Mogg said the matter of the leak was trivial when compared to the issue of the Chinese company’s involvement in the 5G network.
“The whole story here is not about a leak, it’s about whether or not we’re getting into bed with the Chinese company Huawei against the advice of the US and Australians who have decided not to,” he told LBC.
“This is a fundamental issue of national security, whether somebody mentioned it in passing and leaked it is trivial in comparison.”
The US has banned Huawei from its government networks and Australia and New Zealand have also placed restrictions on the company.