US Sanctions Cost Venezuela $6B Since August 2017, Sparking Humanitarian Catastrophe
Cutting Caracas out of the international market has already triggered a widespread humanitarian catastrophe causing ordinary Venezuelans to suffer the consequences. 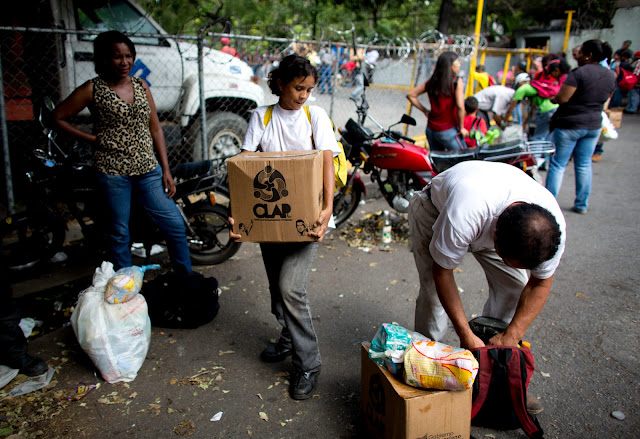 CARACAS, VENEZUELA — United States sanctions against the Bolivarian Republic of Venezuela have cost the Latin American nation $6 billion since August of 2017, leaving the fate of healthcare and access to basic goods in jeopardy for millions of already struggling Venezuelans.

As recently as early October, an anonymous source from the Trump administration told Reuters that “all options are on the table” in regard to even tighter sanctions against the country. This is part of a growing trend, as the Trump administration prepares to strengthen its attacks against socialist or left-leaning nations throughout Latin America.

According to a report from Canadian analyst Joe Emersberger, U.S. sanctions have quite literally starved Venezuelans out of a staggering $6 billion since the latest round took effect in August of 2017, cutting Venezuela off from the global market.

To put this figure into perspective, $6 billion is over 130 times the $46 million requested by the United Nations Refugee Agency (UNHCR) for the “Venezuela Situation” in March of this year, which likely wouldn’t be needed if Caracas had financial support to provide for its citizens.

Emersberger points out that prior to this time, Venezuela’s crude oil output followed the same gradual decline as Colombia’s between January of 2016 and August of 2017, as overall oil prices fell. At that point, when the sanctions took effect, Venezuela’s oil production plummeted to record lows, with civilians bearing the brunt of the consequences.
Oil production is Venezuela’s primary source of income and foreign investment. Without funding from state-owned oil enterprises, the government struggles to provide healthcare to its population, with the most vulnerable facing most of the risk: pregnant women, the injured, the elderly, children, and those with chronic illness.

As with other countries such as Iran, Syria, and Iraq, the Venezuelan sanctions move falls into Washington’s general strategy of causing widespread civil turmoil and ultimately collapsing adversarial governments from within by suffocating them out of the global market.
According to the Brookings Institution, over 4 million Venezuelans have fled the country as economic refugees — 10 percent of the population. Meanwhile, the infant mortality rate rose 30 percent in 2016 alone and three-quarters of the country’s adult population has lost an average of 20 lbs.
Although Brookings blames mismanagement and “nothing else,” sanctions and economic war against Venezuela are the real source of deteriorating conditions within the country.
The August 2017 round of sanctions banned the Venezuelan government from accessing U.S. funding. Since Venezuela’s state-owned CITGO is based in Texas, this effectively held the asset hostage. A year later in August of 2018, a United States judge approved the seizure of CITGO entirely.
Venezuelan President Nicolas Maduro blames the United States and its allies in the right-wing opposition for launching an “economic war” against his country and putting political pressure on his government. Between 2009 and 2017, the United States government budgeted $49 million for violent right-wing militias and political opposition groups with the goal of overthrowing Venezuela’s revolutionary government.
The Trump administration also has its eyes on Cuba, particularly in regard to Havana’s support of Venezuela. Speaking to Reuters, an anonymous U.S. official stated that Washington planned to increase economic pressure on Cuba’s intelligence and military sectors. The source noted last week that President Donald Trump’s notorious national security advisor, John Bolton, would soon elaborate on the Cuba question.
At the UN General Assembly last month, Trump pointed the finger of blame at Venezuela’s “Cuban sponsors” for the current crisis.
It’s unclear at this point whether or not Washington will follow through on its promises to heighten sanctions even further against Venezuela’s energy sector and insurance coverage for oil shipments.
Regardless, cutting Caracas out of the international market has already triggered a widespread humanitarian catastrophe causing ordinary Venezuelans to suffer the consequences.
Top Photo | People take boxes of food staples, such as beans, rice, tuna and powdered milk, provided by the government program “CLAP,” which stands for Local Committees of Supply and Production, in Caracas, Venezuela, May 16, 2018. The squeeze of financial sanctions by the Trump administration is choking the cash-starved government as it struggles to feed its people. Ariana Cubillos | AP
Randi Nord is a MintPress News staff writer. She is also co-founder of Geopolitics Alert where she covers U.S. foreign policy in the Middle East with a special focus on Yemen.
Here are two essential documentaries for understanding Venezuela

The first is a documentary "the Revolution will not be televised": a TV film crew captured and chronicled the attempted 2002 coup against Hugo Chavez


John Pilger's documentary , "the War on Democracy".   Tthe film shows how serial US intervention, overt and covert, has toppled a series of legitimate governments in the Latin American region since the 1950s. The democratically elected Chilean government of Salvador Allende, for example, was ousted by a US backed coup in 1973 and replaced by the military dictatorship of General Pinochet. Guatemala, Panama, Nicaragua, Honduras and El Salvador have all been invaded by the United States.

Posted by seemorerocks at 16:41