Scientists pose geoengineering as an option to fight climate change

Even Newshub says on Facebook “What could go wrong?”

It seems to me they could be softning people up for something that may already be happening.

If it is all "theoretical" and "in the future" why, I ask, do they provide a picture of a commercial jet producing (presumably) aluminium-containing "contrails" 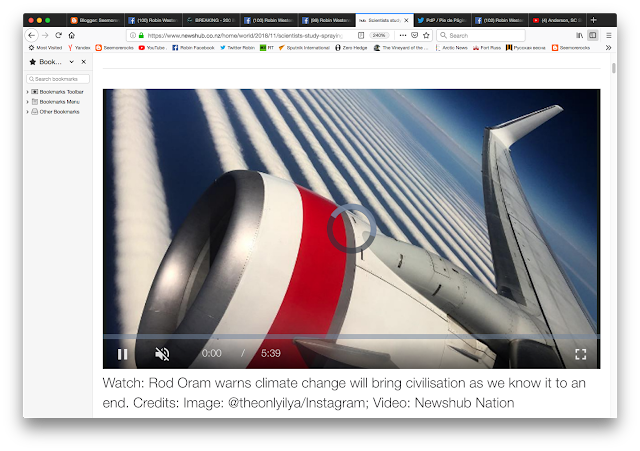 Spraying sun-dimming chemicals high above the Earth to slow global warming could be "remarkably inexpensive", costing about NZ$3.3 billion a year over a 15-year period, according to a study by US scientists.

As yet unproven and hypothetical, it would involve the use of huge hoses, cannons or specially designed aircraft to spray large quantities of sulphate particles into the upper layer of the atmosphere to act as a reflective barrier against sunlight.

Total costs to launch a hypothetical SAI effort 15 years from now would be NZ$5.11 billion, scientists at Harvard University said in a report published in the journal Environmental Research Letters, adding that average annual operating costs would be about NZ$3.3 billion a year over 15 years.

Discounting other methods of deployment because of cost and feasibility, the research assumes a special aircraft can be designed to fly at an altitude of about 20km and carry a load of 25 tonnes.

After direct input from several aerospace and engine companies, the scientists said they have developed a design that could be suitable and could be ready to be deployed in 15 years, aiming to cut the rate of temperature change in half.

The scientists emphasised that this is merely a hypothetical scenario.

"We make no judgment about the desirability of SAI. We simply show that a hypothetical deployment programme commencing 15 years hence, while both highly uncertain and ambitious, would indeed be technically possible from an engineering perspective. It would also be remarkably inexpensive," the report said.

There are risks to such unproven potential technologies. Scientists have said SAI could result in negative consequences such as causing droughts or extreme weather in other parts of the world, harm crop yields as well as potential public health and governance issues.

It also does not address the issue of rising carbon dioxide emissions, the main greenhouse gas blamed for global warming.


Commenting on the study, Phil Williamson at the University of East Anglia said: "Such scenarios are fraught with problems - and international agreement to go ahead with such action would seem near-impossible to achieve."
Reuters