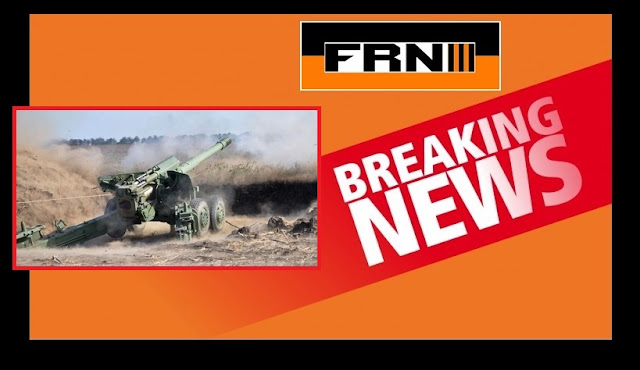 DONETSK, Democratic People’s Republic of Donetsk – FRN has confirmed that the Ukrainian Army has begun shelling several residential neighborhoods in the DPR.


While the  Ukrainian army regularly violates the Minsk II ceasefire agreement, recorded by the OSCE, the present bombardment underway is the heaviest in over a year.
This comes unsurprisingly, as on November 23rd, Ukraine deployed its S-300 systems close to the Donbass border. Then very late in the day on November 24th, terrorists under U.S allied orders, carried out a chlorine chemical attack upon Aleppo, staged from Idlib. On November 25th, the Ukrainian Navy provoked a response from the Russian Navy and FSB, forcing the Russians at the strait of Kerch to seize control of three Ukrainian naval vessels, with two Ukrainian sailors reported injured or dead (reports unclear).
Read more: Naval Sea Battle in Azov – Ukraine Admits Three Boats Captured
FRN has found, in its experience covering this war on two fronts, that major events in one theater come concurrently with major events in the other. Therefore, given the arrival of British special forces into Ukraine, and the long build-up of Ukrainian and NATO-national foreign mercenaries along the line of contact, it appeared only a matter of time before such a bombardment would begin.
According to information being presently assessed by FRN, the bombardment commenced around midnight in the Donbass, and consist of various weapons, chiefly including heavy artillery.
Strangely, DPR Leaders Urge Calm – as DPR Spokespeople deny Shelling has started
As a representative of the People’s Militia has told DAN , the situation on the contact line is nevertheless under the full control of the People’s Republics.
“The situation, like 24 hours a day, is under the full control of our forces. Citizens can sleep peacefully,” said the representative.

The representation of the DPR in the Joint Ceasefire Control and Coordination Center in southern Donbass informed that the situation remained stable.
“A shelling with prohibited weapons has not been registered yet,” said the head of the representation, Ruslan Yakubov. This contradicts numerous credible reports from the ground, and raises questions as to what attempts the DPR is making to control any expected response.
Clearly Ukraine is looking for ways to force the DPR and, perhaps even the Russian Federation, to respond in a robust way to these attacks.
This comes as Ukrainian president, Poroshenko, is trailing by double digits in polls as the country heads towards election season at the start of 2019. Tymoshenko is expected to win, and while she is a well known Ukrainian oligarch with a proven history of corruption, she is playing upon growing anti-war sentiments within Ukraine, and general distrust the public has with the present government.
Poroshenko’s ‘out’ from having to conduct an election would be a serious increase in hostilities which would offer him the pretext to cancel elections as the country would enter a state of martial law.
Conflict in the Donbass
The Ukrainian authorities began a military operation in 2014 against the self-proclaimed People’s Republics of Donetsk and Lugansk.
The issue of the settlement of the situation in Donbass was discussed in the context of the Minsk contact group, which since September 2014 has already adopted three documents regulating steps towards the de-escalation of the conflict. However, exchanges of fire continue even after the conclusion of the truce agreements.
Since then, Ukraine has not made good on the full scope of its commitments, and has engaged in regular violations of the ceasefire. They continue to insist on a clearly erroneous interpretation of the language of the ceasefire to the effect that Kiev would select that Donbass representatives whom they would then negotiate with. This contradicts both the nature of the contact group signed off on by the elected breakaway Donbass leadership, and the subsequent Minsk II agreement that came out of the Normandy Four format, which recognized that the present leadership of the break-away republics had the authority to negotiate a settlement.