Poroshenko failed in his attempt to get dictatorial powers

The Ukrainian president Petro Poroshenko's attempted to shore up his approval rate for the upcoming election by provoking a military incident. It was a gamble and it failed.

Three Ukrainian boats, a tug and two gun boats, attempted to sail from the Black Sea through the Kerch Strait into the Sea of Azov. The Kerch Strait is territorial Russian water since Crimea voted to join Russia. "Innocent passage" is allowed but necessitates following the laws and regulations of the territorial country. 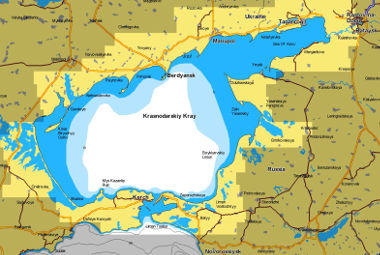 The Ukraine does not accept the decision the people of Crimea and insists that the peninsula is still part of its territory. The Ukrainian president Petro Poroshenko sent the boats with the order not to coordinate their passage with Russian authorities. The captured sailors confirm that. He obviously wanted to provoke a violent Russian reaction.
The government of Ukraine practically admitted that the mission had nefarious intent:

Ukraine’s state security service says that its intelligence officers were among the crew on Ukrainian naval ships seized by Russia in a standoff near Crimea.


The SBU agency said in a statement Tuesday that the officers were fulfilling counterintelligence operations for the Ukrainian navy, in response to “psychological and physical pressure” by Russian spy services. It didn’t elaborate, but demanded that Russia stop such activity.

Russia’s FSB intelligence agency said late Monday that that there were SBU officers on board the Ukrainian ships, calling that proof of a “provocation” staged by Ukraine.

What is the real reason that these agents were on board of the Ukrainian gun boats?

And why was the crew of the tug armed with heavy machine guns? 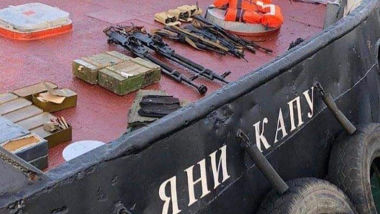 A few of the Ukrainian seaman were lightly wounded when the Russian coast guard took a shot at one of the boats. 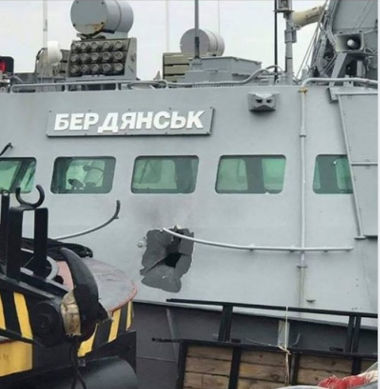 The gun boats of the Gurza-M class were built on a shipyard that Poroshenko owned at that time. He profited from ordering them. They may be useful for river policing but do not belong at sea.

The Russian coast guard had no problem to disable the ships and to capture their crews. A Crimean court ordered that the sailors will be held for two more month while they face charges over border violations.

In 1988 the U.S. tried to pull up a similar stunt in the Black Sea. Two U.S. Navy ships with spying equipment crossed into Soviet territorial water near Crimea. They got rammed (vid) by Soviet ships and were smart enough to move out before the situation escalated further.

Poroshenko's intent was to provoke an incident that would allow him to present himself as a war-president. Elections are coming up and all polls show him below 10% and far behind two other candidates. He attempted to use the incident to introduce martial law over all the Ukraine.

Back in July Yulia Tymoshenko, who is leading the polls for the next elections, warned that Poroshenko would take this step (machine translation):

The leader of Batkivshchyna, Yulia Tymoshenko, claims that one of her main competitors in the upcoming presidential election, the incumbent head of state, Petro Poroshenko, is allegedly nurturing a “extremely dangerous plan” to disrupt voting by escalating the war in Donbass and imposing martial law in Ukraine. The politician made such a statement on the TV channel UA: First.


Tymoshenko stated that Poroshenko "does not want" to hold presidential elections in order to "save power", ...

Yesterday Poroshenko tried to scare the parliament into accepting his plans:

“Intelligence data speak of an extremely serious threat,” Poroshenko declared in a televised address on Monday, brandishing a pile of paper, which, he said, was an intelligence report detailing the Russian forces massed close to the border. At a session of the United Nations Security Council called at Ukraine’s request late on Monday, the country’s representative, Volodymyr Yelchenko, claimed the Azov Sea ports of Mariupol and Berdyansk faced invasion.

That is of course utter nonsense. Russia has no interest in launching a war with the Ukraine. There is nothing to gain from it.
The parliament must vote on the introduction of martial law and the opposition parties recognized Poroshenko's stunt for what it was. His plans were rejected. Poroshenko pulled back. Instead of the 60 day long, renewable period of martial law he wanted, he had to settle for 30 days. And that was still not enough:

Rival political parties - former prime minister Yulia Tymoshenko’s Fatherland, Lviv Mayor Andriy Sadovyi’s Self-Help and populist Oleh Lyashko’s Radical Party – demanded further concessions. They wanted immediate confirmation, rather than just a promise, that the election will go ahead on March 31. They sought to limit martial law to a number of regions rather the whole country, and they objected to any plans to limit Ukrainians’ constitutional freedoms. Their fear wasn’t just that campaigning would be limited, but that Poroshenko would get near-dictatorial powers.

There will now be a limited martial law but only in those regions that border Russia or the Black Sea. The opposition and its foreign backers will take care that its use will not get out of hand. There will be a limited call-up of reserve troops, but most of the reservists are to likely ignore it.

With the election date set to March 31 by the parliament Poroshenko has no legal tool to postpone it.

Unless of course he manages to provoke a real war, either with the rebels who are holding the Donetsk and Luhansk oblasts, or with Russia itself. The lunatic warmongers at the Atlantic Council urge him to do exactly that:

Even though Ukraine is outgunned, it does have options. It can undertake operations to break the blockade, though they would likely be fruitless given the forces Moscow has sent there.

Nevertheless, it cannot accept this attack on its sovereignty and integrity passively. Ukraine should give careful consideration to a special operation that might disrupt the bridge that Moscow built over the Kerch Strait that joins Crimea to Russia.

But that’s not all. Ukraine should invite the United States and NATO to send a fleet of armed ships to visit Mariupol, the main city on the Sea of Azov coast and defy Russia to fire on or block NATO from exercising the right to visit Ukraine’s ports. Those ships should be armed and have air cover but be instructed not to fire unless fired upon.

Even Poroshenko is not dumb enough to repeat his failed provocation in the Kerch Strait. The Kerch bridge is guarded. Its pillars are massive because it was build near a fault and has be able to withstand earthquakes. A saboteur unit would have to bring several tons of high explosives to even damage one. To reach Mariupol in the Sea of Azov ships have to cross through the the Kerch Strait. The passage is a very narrow artificial channel with only 8 meter depth. Outside of the channel the water is as shallow as a think tankers thought. Any ship with more than 2-3 meters draft has zero room to navigate there. Russia does not even need boats or airplanes to protect it. A few guns along the coast can easily control the passage. No sane naval commander will try to pass the Strait by force. 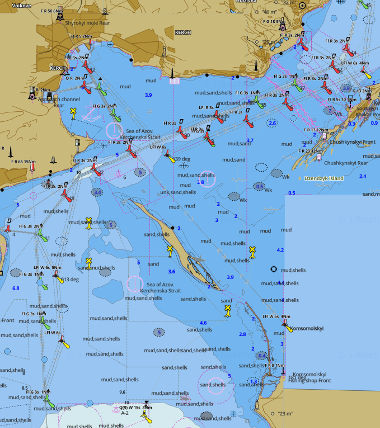 Russia already warned warned against further 'reckless' moves and deployed an anti-ship missile system (vid) to the Kerch Strait to make sure that any further provocations there will have deadly consequences.

Poroshenko could start a provocation elsewhere. He could attempt to reconquer the Donetzk airport. But while he might itch for losing more fights, a full blown war is out of question. Kiev's army is low on morale and would be defeated within days.

Poroshenko's rule was catastrophic for the Ukraine. In several cities the central heating and warm water supply is broken. Ten-thousands will have to freeze during the winter, some of them to death. Since Poroshenko came to power millions of able Ukrainian workers have fled or work abroad, most of them to Russia. The most industrialized regions are in firmly in rebel hands. Most of the population is poor, the bureaucracy is utterly corrupt and the country is practically bankrupt.

There will likely be dozens of corruption cases brought up against Poroshenko himself as soon as he loses power. If he is smart he will flee the Ukraine the very day his term ends.

The international reactions showed that Poroshenko is no longer of value. While the russo-phobe Poland and the Baltic countries called for more sanction against Russia the European heavyweights Germany and France urged deescalation and direct negotiations between Russia and Ukraine. (Sources in Berlin say that Merkel firmly told him to stand down.) The U.S. reaction was delayed and mild. Trump punted the problem to the Europeans.

Pedro Poroshenko will leave the political stage as a despised man. But will also be much richer after he pilfered the Ukrainian state wherever he could. The people of the Ukraine should take their money back before dumping him abroad.

The president is negotiating with militants in the Donbass on the escalation of war to disrupt the elections-2019 martial law, says the leader of the Fatherland

The leader of Batkivshchyna, Yulia Tymoshenko, claims that one of her main competitors in the upcoming presidential election, the incumbent head of state, Petro Poroshenko, is allegedly nurturing a “extremely dangerous plan” to disrupt voting by escalating the war in Donbass and imposing martial law in Ukraine. The politician made such a statement on the TV channel UA: First.

Tymoshenko stated that Poroshenko "does not want" to hold presidential elections in order to "save power", and therefore began a "deep negotiation process" with the Kremlin puppet in the occupied Donbas.

“Poroshenko wants to initiate the beginning of a big war. He wants the territories of Ukraine to be additionally seized, everything to burn, to burn, to let the war go to the highest level ... He wants to impose martial law and not hold elections in principle,” the deputy said.

According to Tymoshenko, presumably, one can already observe the prerequisites for a "big war": in the Donbass "our military are beginning to die", the number of wounded is growing, and fighting is becoming more active.

Also, the leader of Batkivshchyna stated that Poroshenko and his entourage have "friendly relations" with the leaders of the Kremlin-controlled militants.

On June 20, 2018, Tymoshenko announced that she would run for president in the 2019 elections. According to the latest opinion polls of the KIIS , the Rating and the Razumkov Center , the leader of the Fatherland is in the second round, its closest competitor is Anatoly Gritsenko .
Posted by seemorerocks at 17:28