US military contractor advertises for personnel for Ukraine ops

A US contractor accidentally revealed a US military specialist deployment in the combat zones in Ukraine via an Job Advertisement on LinkedIn.

Similarly to the Atlantic Council’s report on independence of Eastern European countries, as well as the meeting between US Secretary of State Mike Pompeo and Ukrainian Foreign Minister Pavlo Klimkin, the posting comes days before the escalation in the Sea of Azov

Mission Essential is a government contractor, which primarily serves intelligence and military clients. It began as the US government’s leading provider of translation and interpretation services.
Screenshot provided in case the advert times out or is “accidentally” taken down: The preemptive job advert was posted on November 16th and seeks “linguist candidates who speak Ukrainian to provide foreign language interpretation and translation services to support classified Contingency Operations in support of the U.S. Military in Ukraine.”

The formal place of work is Mykolayiv, Ukraine. The port city is also significant, because that is where the US “logistical” naval facility is currently under construction.

The advert also requires candidates to be able to fit in the local culture and customs, in addition to “the ability to deal inconspicuously with local populace if necessary.” Which simply means that the interpreter needs to be able to hide the fact that he is not a Ukrainian citizen, at least partly.
Unsurprisingly, the individual needs to be able to serve in a combat zone “if necessary,” in addition to being able to “live, work, and travel in harsh environments, to include living and working in temporary facilities as mission dictates.”

Considering repeated claims by the US leadership that the US is not involved in the Ukraine conflict, the vacancy posting is an operational security failure by Mission Essential. Most other vacancies posted by the company are for analysts and various linguistical and project management positions, almost predominantly in different military facilities in the US.
It is quite possible that these specialists would assist US military personnel deployed in or near the “combat zones” in Ukraine – i.e. Eastern Ukraine, and as it was expected since as early as November 16th – the Sea of Azov.


This is another piece that reinforces the notion that the “provocation by Russia” in the Sea of Azov was somehow premeditated. However, it also appears that, Ukrainian President Petro Poroshenko’s plans appeared to, at least partially, backfire. “Partially,” because he managed to instate martial law and make another step in his attempts to postpone elections in 2019, thus “democratically” holding on to power and not allowing the Ukrainian citizens to vote and most likely elect his rival and favored presidential candidate Yulia Tymoshenko. 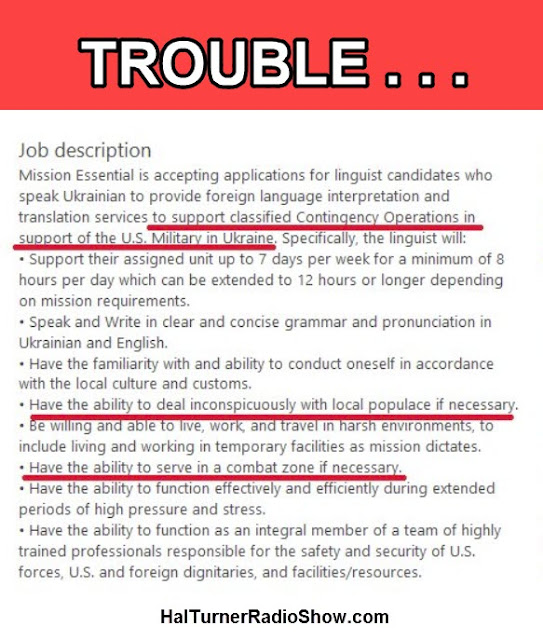 Last Sunday's naval battle between three Ukrainian vessels and two Russian Coast Guard Vessels, which resulted in heavy gunfire and the capture of the 3 Ukrainian vessels, was part of an ongoing plan for VERY serious trouble to be foist upon Russia using Ukraine as a proxy to cause that trouble.

I can now report that CLASSIFIED war-like operations are actively being planned by the United States inside Ukraine and that Military Contractors are already hiring operators for "Combat Zone" work in Ukraine.
It turns out that over a week prior to the naval battle, US Military contractors began posting Help Wanted ads for "Classified Contingency Operations in support of the US Military in Ukraine."   I have one of the ads . . .
Worse, the ad requires applicants to be able to deal inconspicuously with local population: and, even more dire, "have the ability to serve in a Combat Zone."
During my talk-radio show which aired last night (Wed. Nov. 28) I told my audience that the US government "needs a very big war, where our major cities are attacked and destroyed, thereby giving the federal government cause to tell creditors "We can't repay the $21 Trillion Dollar Debt."   I also told my audience that in a major war, the first targets are the major cities, and that's where the overwhelming majority of welfare recipients live.  So the feds look at a war as a two-fold "win" -- they get out of $21 Trillion in debt and they kill off a slew of the useless eaters they've been paying money to!
Now, we see that actual planning for an actual war with Russia, inside Ukraine, is already weeks-in-the-works . . . See for yourselves below the ad.
Here is the full ad being run by Military Contractor, Mission Essential: (Click to Enlarge)

Very interesting is the expressed desire for applicants to already possess Top Secret (TS) / Special Compartmentalized Information (SCI) security Clearances -- or higher.
Just to prove that this is as serious as it gets, the city listed at the top of the ad is Mykolayiv - very near the Black Sea AND Crimea as seen on the scalable map below:
So when I told my radio audience on the air last night that "someone wants a war" . . .  it's pretty clear they not only WANT one, they're already actively planning it.
I earnestly hope each of my readers has "preps" in the form of Emergency food, water, fuel, heating capability, medicines, guns, ammunition and so forth.  It looks as though elements within our own federal government are actively working toward starting a terrible war.  The proof is right in front of us all; you don't hire people for work in a combat zone unless you already know there's going to BE a combat zone.  Just like you don't put on a Condom unless you're gonna  . . . .
It's that simple.  It's that real.  We are already actively HIRING people to work in a combat zone in Ukraine.  God help us all.
Posted by seemorerocks at 14:21