The mayor of Tijuana declared an international humanitarian crisis on Thursday following the arrival of more than 6,200 mostly Central American migrants - with more on the way.


During a press conference, Mayor Juan Manuel Gastélum called on the United Nations and other international groups to step in and assist with the massive influx of migrants, reports AZ Central. Up to 10,000 migrants could eventually end up in Tijuana, according to the federal government.

For now, the majority of caravan members who have arrived in Tijuana are camped out on a dirt baseball field at an outdoor sports arena and underneath bleachers. The city opened the complex after their other shelters reached capacity, while church groups have chipped in to provide portable showers, bathrooms and sinks. Local businesses, meanwhile, have complained of migrants panhandling and stealing. 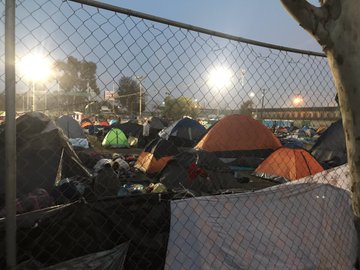 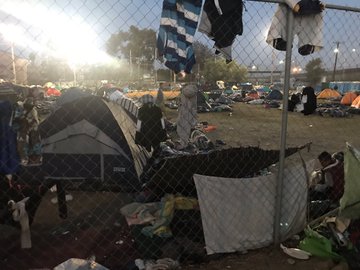 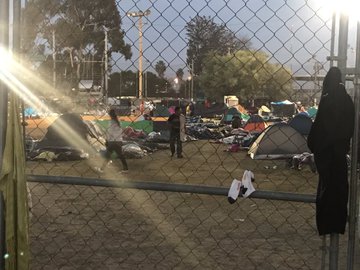 Rafael Carranza@RafaelCarranza
Another dawn breaks at the sports complex-turned-shelter for the #MigrantCaravan in #Tijuana. Seven more bus loads of migrants arrived here overnight from #Mexicali. They were allowed inside, but the only space available for most to settle in is the cold/damp baseball field.
9
3:37 AM - Nov 22, 2018

Donald J. Trump✔@realDonaldTrump
The Mayor of Tijuana, Mexico, just stated that “the City is ill-prepared to handle this many migrants, the backlog could last 6 months.” Likewise, the U.S. is ill-prepared for this invasion, and will not stand for it. They are causing crime and big problems in Mexico. Go home!
113K
7:42 AM - Nov 19, 2018
Twitter Ads info and privacy

"They have categorically omitted and not complied with their legal obligations," said Gastélum of aid organizations, adding "So we're now asking them and international humanitarian aid groups to bring in and carry out humanitarian assistance."

The municipal government estimated it has spent nearly $27,000 daily to house and care for the nearly 4,700 migrants currently in the city. They are housed mostly in the Unidad Deportiva Benito Juarez, a sport complex converted into a makeshift shelter, but well over capacity since the start of the week. -AZ Central

"I will not compromise public services," Gastelum told reporters while speaking from city hall. "I will not spend Tijuanans' money, I will not bring Tijuana into debt now, in the same way we haven't done so these past two years."

Gastélum has drawn both criticism and support in recent days over his strict approach to the migrant caravan. He was spotted last week wearing a red hat that reads "Make Tijuana Great Again," while Tijuana locals have been slinging insults - and rocks - at the migrants.

Meanwhile, a small group of around 500 of the migrants "slowly and peacefully pushed within 500 feet of the US border" on Thursday, pressing against armed Mexican federal police near the US-Mexico pedestrian crossing, according to the San Diego Union Tribune.

Asking for more humane conditions in the overflowing Benito Juarez shelter and trying to present themselves to United States immigration authorities for asylum, the group carried white flags as they marched from the migrant camp to the foot of the U.S. pedestrian bridge, a distance of about five city blocks.

“There are sick children here, and we are cold and hungry,” said Carlos Lopez, a Honduran who was leading the group. Lopez added it was inappropriate to shelter the women and children outside. “The whole world is watching what is happening here.” -San Diego Union Tribune

The migrants have demanded better housing conditions and food while they await US officials to process their asylum requests.

President Trump, meanwhile, said on Thursday that he's signed an order to close the US border with Mexico, and that he has authorized troops to use lethal force gainst migrants who attempt to enter the US "If they have to." 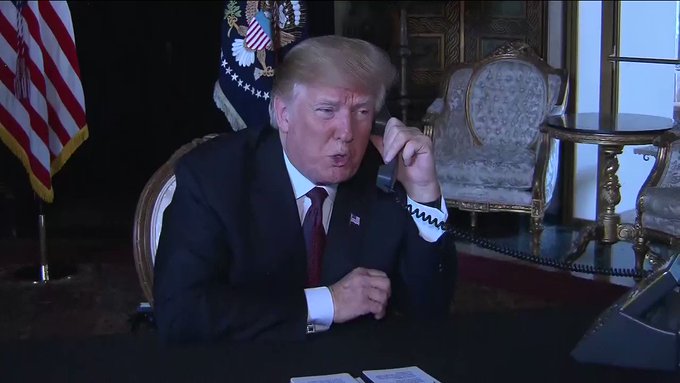 The Hill✔@thehill
President Trump: "As you probably see over the news what's happening at our southern border... Large numbers of people, and in many cases we have no idea who they are, and in many cases they are not good people. They are bad people." http://hill.cm/TBY8QTx
50
5:31 AM - Nov 24, 2018

106 people are talking about this
Twitter Ads info and privacy
The Department of Homeland Security on Monday estimated that there are around 500 criminals traveling in the caravan.

Paloma Zuniga, a dual Mexican-American citizen who has more than 32,000 followers on a Facebook page called “Paloma for Trump” said she is worried about public safety in Tijuana because some in the group are traveling without ID’s. -San Diego Union Tribune

"We have no idea who they are, Zuniga said. "Also, we have a lot of poverty here in Mexico already. We’ve been working hard, fighting every day to have a better life, to have a better quality of life, to have more jobs … and we don’t feel it’s fair that our government is allowing these people to come in and giving them benefits we don’t even have as Mexicans."

Sound familiar?
Meanwhile, DHS Secretary Kristjen Nielsen warned on Wednesday that the caravan is "the majority of the caravan that we see is made up of single adult males or teenage males. In addition, we have identified over 500 criminals to include known gang members contained in the flow of the caravan."

On Wednesday, President Trump hit out against "activist" judges who continue to strike down his orders to secure the border.

Donald J. Trump✔@realDonaldTrump
There are a lot of CRIMINALS in the Caravan. We will stop them. Catch and Detain! Judicial Activism, by people who know nothing about security and the safety of our citizens, is putting our country in great danger. Not good!
95.2K
10:42 AM - Nov 22, 2018
Twitter Ads info and privacy

46.4K people are talking about this
Twitter Ads info and privacy
Trump threatened to pull all aid and funding from Honduras if its government does not halt the migrant caravan, and has pressured the Mexican government to stop the migrants from crossing into the United States.

On Tuesday, White House chief of staff John Kelly reportedly signed a "Cabinet order" which allows US troops stationed at the border permission to act in a law enforcement capacity, including the use of lethal force, if necessary
Posted by seemorerocks at 20:36