Preventing the militarisation of the Sea of Azov


Russia Blocks Ukrainian Navy From Militarizing The Sea of Azov


The Ukrainian government under the oligarch Petro Poroshenko is in election campaign mode. That is one reason why it is launching new provocations against Russia. Yesterday Ukrainian forces occupied a town within the neutral zone between the government controlled part and the rebel held Donetsk area. Today the Ukrainian navy sent a tug and two small gun boats, recently acquired from the U.S. Coast Guard, to pass through the Kerch Strait into the Sea of Azov.

When the ships entered Russian waters without announcing their intent, a Russian coast guard ship rammed (vid) and damaged the tug. The two gun boats escaped but did not pass the strait. The pictures show the melee at sea. 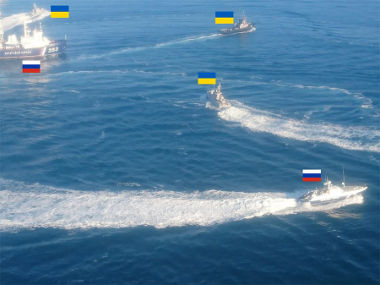 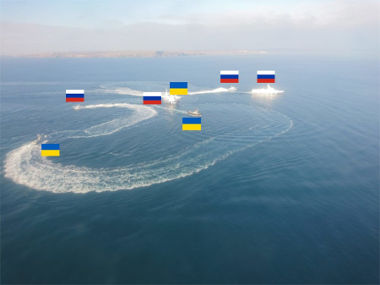 With Crimea back in Russian hands the Kerch Strait is solely Russian territory. The Treaty on the Legal Status of the Sea of Azov and the Kerch Strait, signed in 2003 by Russia and the Ukraine, provides that military ship entry into the sea is only allowed with mutual consent. Ukraine disputes the status of the sea in an arbitration court. (For a legal discussion of the case see 1, 2, 3.)

The Ukrainian government, urged on by the U.S., wants to establish a new military harbor in the Sea of Azov. Two of its navy ships, a rescue vessel and a tug, passed through the street on September 23. In October the Russian government warned that it will not allow any further militarization of the sea. Some U.S. hawks even want NATO ships to enter the Sea of Azov. The Sea of Azov has a maximum depth of 7 meters. Typical U.S. frigates have a draft of 10+ meters. What NATO or U.S. ship could even go there? As Russia firmly controls the sole entry point into the sea and can easily attack any ship in the Sea of Azov from within its borders the idea is incredibly stupid.

The Kerch Strait is now blocked by a large cargo ship the Russians anchored under the new Kerch bridge. 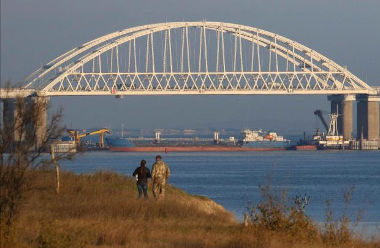 The passage is closed and a number of ships are bunched up on both sides. 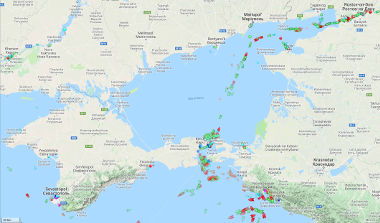 Pic via MarineTraffic of traffic at 15:45 utc -

The Ukrainian provocation may well be aimed to sour the meeting between President Trump and Putin that is planned for November 30 during the G20 summit in Argentina. It should be more careful. It is quite possible that Russia will block commercial traffic to the Ukrainian port of Mariupol over any further incident. The big loser of this useless provocation would then again be the Ukraine.