The rapid retreat of New Zealand's glaciers: a personal view

“The 1890s extent of ice volume in New Zealand’s Southern Alps was 170 km3, compared to 36.1 km3 now. That disappearance of 75-80% of Southern Alps ice is graphic evidence of the local effects of global warming”

It is a matter of shame that there has been so little in New Zealand media (count on the fingers of ONE hand) on the demise of ice in the Southern Alps in New Zealand and the rapid retreat of our main glaciers.

About a week ago Radio NZ featured the following interview with Dave Bamford, a lifelong mountain climber.  It was unscheduled and labelled by "Nghts Sport"  (there are no details as to what is being discussed in the interview, and yet it gave one of the best first-person  accounts of what is happening to our Alps.

Judging from what Dave is saying it would be hard to find a climate sceptic amongst the climbing fraternity because they have to live with the consequences.

Already many places have become unaccessible and passes over the mountains are in essence closed because of the danger of landslides from the collapse of the morraine wall on the sides of the ice river.

Listen to the interview. It is worth your time. 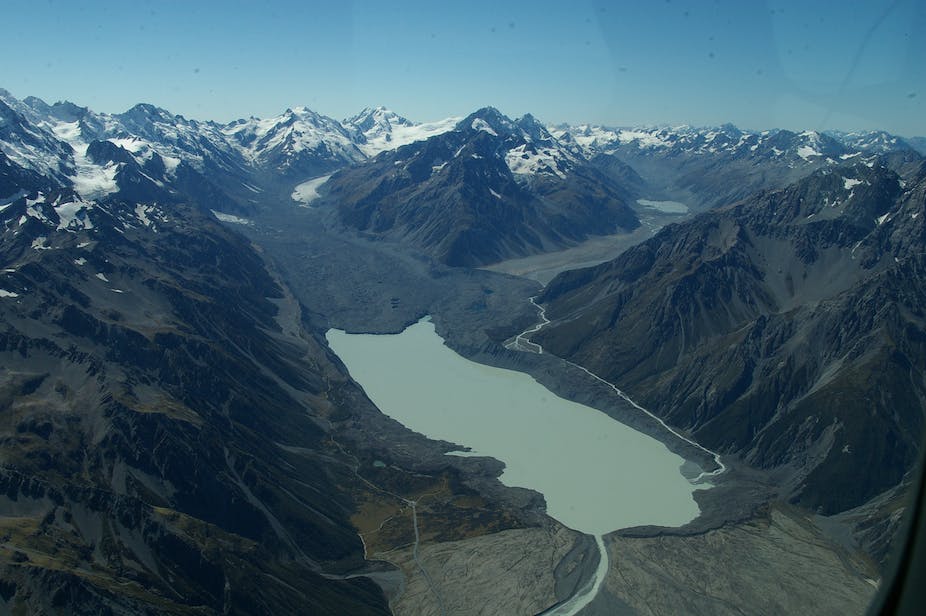 Listen to the interview here.

You can see 2 years of glacier retreat illiustrated here.

It is a matter of considerable shame that I have to report that some of the main reporting on this has been in the foreign media.

This piece of research was carried by Australia's the Conversation and not by New Zealand media. 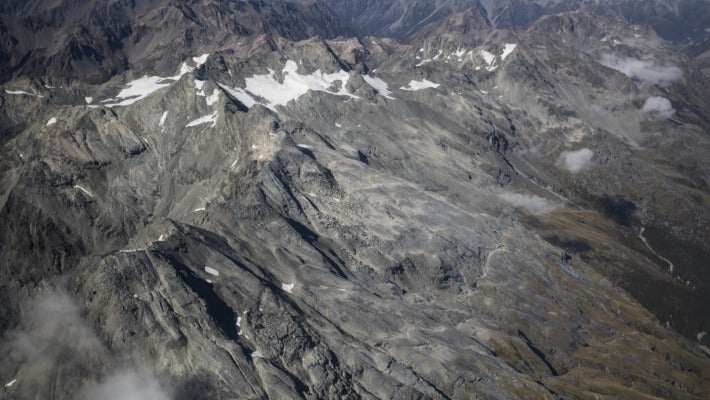 The largely bare Southern Alps at the end of summer, 2018. 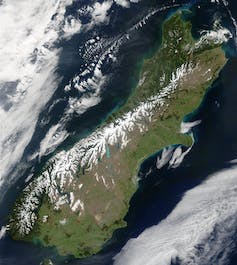 The story of the Southern Alps’s disappearing ice has been very dramatic – and when lined up with rapid glacier retreats in many parts of the world, raises serious questions about future sea level rise and coastal climate impacts. 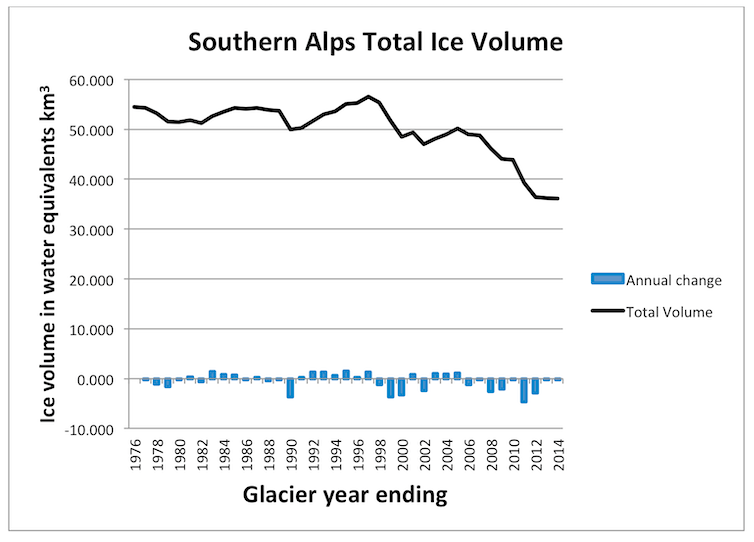 The Southern Alps’ total ice volume (solid line) and annual gains or losses (bars) from 1976 to 2014 in km3 of water equivalent, as calculated from the end-of-summer-snowline monitoring programme.

Glaciers are large-scale, highly sensitive climate instruments, which in an ideal world we would pick up and weigh once a year, because their fluctuations provide one of the clearest signals of climate change. A glacier is simply the surplus ice that collects above the permanent snowline where the losses to summer melting are less than the gains from winter accumulation. A glacier flows downhill and crosses the permanent snowline from the area of snow gain to the zone of ice loss. The altitude of this permanent snowline is the equilibrium line: it marks the altitude at which snow gain (accumulation) is exactly balanced by melt (ablation) and is represented by the end-of-summer snowline. <image id= Authors, CC BY
In 1977, one of us (Trevor Chinn) commenced aerial photography to measure the annual end-of-summer snowline for 50 index glaciers throughout the Southern Alps.
These annual end-of-summer surveys have been continued by the National Institute of Water and Atmospheric Research (NIWA). We then use the NIWA results to calculate the annual glacier mass balance and hence volume changes of small to medium sized glaciers in the Southern Alps. Small to medium glaciers respond quickly to annual variability of weather and climate, and are in balance with the current climate.
Not so the twelve largest glaciers: the Tasman, Godley, Murchison, Classen, Mueller, Hooker, Ramsay, Volta/Therma, La Perouse, Balfour, Grey, and Maud glaciers. These have a thick layer of insulating rocks on top of the ice lower down the glaciers trunk. Their response to new snow at the top is subdued, and take many decades to respond.
Up until the 1970s, their surfaces lowered like sinking lids maintaining their original areas. Thereafter, glacial lakes have formed and they have undergone rapid retreat and ice loss. 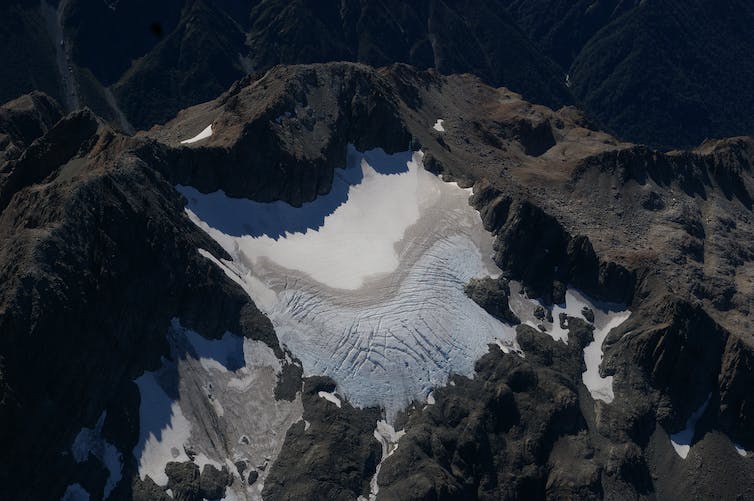 The Rolleston index glacier in the Southern Alps of New Zealand, showing the accumulation area where fresh clean snow gain occurs above the end-of-summer snowline, and the area of melting ice below. Here, a negative balance year in 2009 shows a higher end-of-summer snowline revealing underlying old snow. Trevor Chinn, CC BY
To come up with our calculations, we have used the snowline survey data plus earlier topographic maps and a GPS survey of the ice levels of the largest glaciers to calculate total ice-volume changes for the Southern Alps up until 2014.
Over that time, ice volume had decreased 34%, from 54.5 km3 to 36.1 km3 in water equivalents. Of that reduction, 40% was from the 12 largest glaciers, and 60% from the small- to medium-sized glaciers.

Martin Hoelzle and associates at the World Glacier Monitoring Service have estimatedestimate the 1890s extent of ice volume in New Zealand’s Southern Alps was 170 km3, compared to 36.1 km3 now. That disappearance of 75-80% of Southern Alps ice is graphic evidence of the local effects of global warming.

Further large losses of ice in the Southern Alps have been projected by glaciologists Valentina Radic and Regine Hock, suggesting that only 7-12 km3 will remain by the end of the 21st century. This is based on regional warming projections of 1.5°C to 2.5°C. This represents a likely devastation of ice cover of the Southern Alps over two centuries because of global warming.
And where does all this melted glacier ice go? Into the oceans, thus making an important contribution to sea level rise, which poses a serious risk to low-lying islands in the Pacific, and low-lying coastal cities from Miami in the US to Christchurch in NZ.
In 2013, the Intergovernmental Panel on Climate Change estimated mountain glacier melt has contributed about 6 to 7 centimetres of sea level rise since 1900, and project a further 10 to 20 cm from this source by 2100.
This excellent piece camed from the New York Times
New Zealand Glaciers Ebb and Tour Guides Play Catch-Up 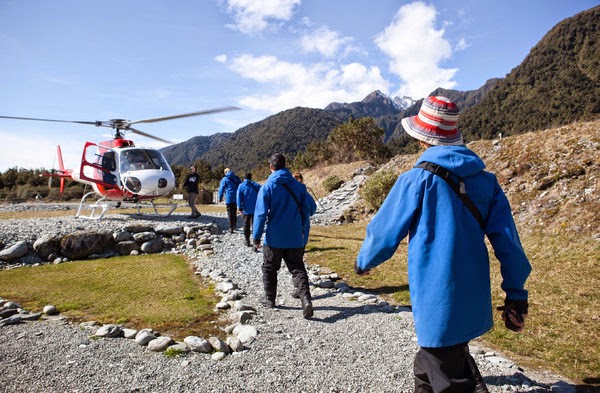 Finally, earlier this year the gap was filled by this article in stuff.co.nz 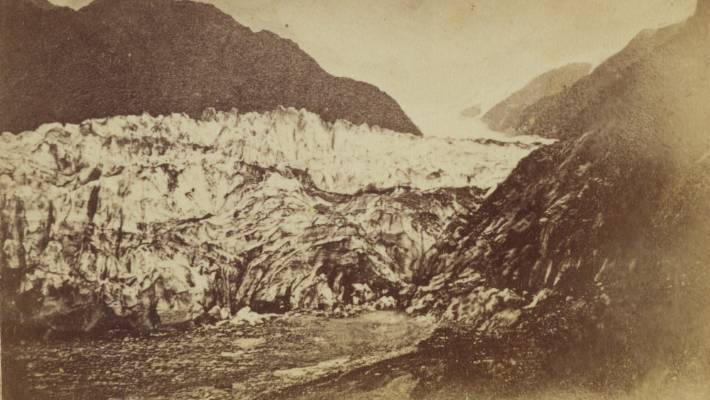