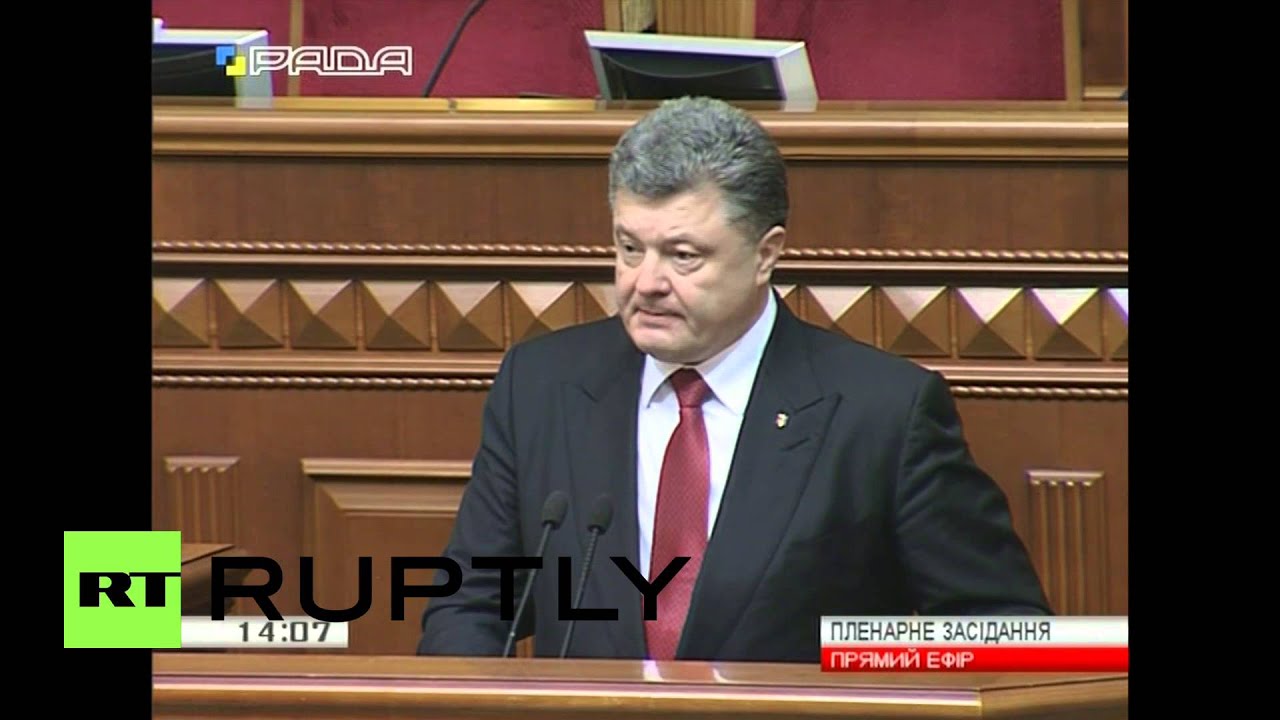 KIEV, Ukraine – President of Ukraine Petro Poroshenko, after being initially thwarted by a refusal to be heard by legislators, has finally succeeded in reaching a compromise with the Ukrainian parliament, the Verkhovna Rada. Poroshenko had initially met with the National Security Council and had agreed with Turchynov to move forward with a 60 day Martial Law declaration, nation-wide. This 60 day imposition would have been able to be extended by approval of the National Security Council, not requiring an additional vote from the Rada.

In doing so, Poroshenko may very well intend to use the powers of Martial Law to silence opponents, declare an internal conspiracy of Russia in Ukraine to ‘hack the elections’ – a trope borrowed from Clinton in the U.S, and have the the presidential elections in March 2019 in such a manner that power is usurped nonetheless.

As FRN reported earlier, the Rada was so opposed to this proposal and in terms, that they refused to allow him to introduce it. He waited for a few hours to be allowed to speak, and then it was believed he left the Rada building.

Rather, it appears he proceeded behind closed doors with key parliamentarians – leaders of the various party blocs – and arrived at a compromise ‘solution’.

The new terms, which the Rada approved in a late session on the evening of the 26th, is a 30-day Martial Law imposition, with what proponents see as ‘critical constitutional guarantors’, and furthermore limited to certain regions of the country. The Rada has just approved the introduction of a 30-day Martial Law in certain regions of the country justified by the Ukrainian provocation in the Kerch Strait area.

Before the vote, Poroshenko addressed the nation on national television, stating that there was an existential and imminent threat of a land operation against Ukraine from Russia. According to him, he has an intelligence document, which describes in detail all the plans of the “enemy”, allegedly located several dozen kilometers from the border and ready “for an immediate invasion of the territory of Ukraine.”

Earlier, the president signed a decree that formalizes the decision of the National Security and Defense Council adopted on Monday night to impose martial law in the country for 60 days. The Rada, having a veto power over such a move by the constitution, pushed back, thwarting his efforts.

After a closed-door meeting with key parliamentarians, Poroshenko proposed to reduce the duration of martial law throughout the country by half, so as “not to disrupt the election of the head of state.” The new law will take effect from 9:00am (Kiev time) on November 28.

However, not all parliamentary party leaders are pleased with this ‘compromise’.

“Poroshenko has imposed martial law against his fellow citizens”, said Verkhovna Rada deputy Oleg Lyashko, and leader of the Radical Party, during a meeting of parliament.

The Radical Party clarified that by decree of the head of state, citizens of Ukraine are deprived of the right to the inviolability of their home, non-interference in private life, freedom of the media, freedom of thought and speech, elections, the right to peaceful assembly, the right to property, work and education.

The deputy also expressed the opinion that Poroshenko intends to falsify the outcome of the presidential elections in March 2019 and usurp power.

“He is indifferent to martial law. His partners all come and go to Moscow as they please. Business both led him and he leads with it. Suddenly in the fifth year (from the beginning of the internal Ukrainian conflict in Donbass. – ed.) he saw the need to impose martial law – four months before the election, when he had a rating below the baseboard, he suddenly saw that martial law had to be imposed. To deceive all of Ukraine “, – concluded the deputy.

As FRN reported, on Sunday morning, ships of the Ukrainian Navy “Berdyansk”, “Nikopol” and “Yany Kapu”, proceeded to the Kerch Strait from the Black Sea, and violated the maritime border of Russia. The group did not react to the legal demands of the Russian border guards, engaged in dangerous maneuvers and were therefore detained. A number of Ukrainian sailors were injured.

Spokesman for the Russian president, Dmitry Peskov, called the incident “a very dangerous provocation that requires a serious investigation.”

Foreign Minister Sergei Lavrov noted that Ukraine had violated international law, and promised that Russia would firmly stop any encroachment on its sovereignty and security.

Russia appeared to have played an end run around the UN Security Council, by rushing to raise an issue, bringing it before the council, on their grounds. Knowing that the US would gather the votes required to silence the issue being raised, Russia proceeded to use this against the US’ interest as Russia does not require a mediator to resolve matters relating to the defense of its borders under such conditions.

MPs Block Poroshenko, He Flees From The Rada To His Facebook Page, Phones Pompeo
His post says martial law would be ready the minute one Russian soldier invades.

Once they blocked Ukrainian President Poroshenko from addressing the Verkhovna Rada about his martial law ukase, he fled to his telephone to call the US for a sympathetic hearing with a promise of yet more sanctions, and to his Facebook page, where Tymoshenko couldn’t stop him.
Here is his latest post:

“I briefed the US Secretary of State Michael Pompeo by phone on the introduction of a regime of martial law. We coordinated steps to further counteract Russian aggression against Ukraine, including in the Kerch Strait. The illegal actions of Russia are completely unacceptable and should receive the most severe reaction of the international community, including the strengthening of sanctions against the Russian Federation.”
Here is my translation of the news report giving the situation in the Ukrainian Parliament, headlined:
POROSHENKO FLED FROM THE RADA
Deputies staged a circus in the parliament: martial law: to be or not to be.
The leader of the party Batkivschina blocked the speech of President [Square]*
The Ukrainian leader fled from an emergency meeting at which he was to announce the introduction of martial law in the country. Before the disappearance, Petro Poroshenko spent about an hour in the parliament. However, he preferred to speak at another venue, where neither the leader of Batkivshchyna Party, Yulia Tymoshenko, nor the “leader” of the Radical Party, Oleg Lyashko, could not prevent him.
“Petro Poroshenko was in the Rada. He waited an hour to speak from the rostrum of the Rada. But since Lyashko and Tymoshenko blocked the procedure, he went and recorded an appeal on Facebook,” representatives of the Bloc of Petro Poroshenkosaid, as quoted in Ukrainian Pravda.
Oksana Syroid, deputy chairman of the Rada, also announced the escape of the head of state. She stressed that lawmakers were looking forward to hearing Peter Alekseevich.
“We wanted to talk with the president. The president ran away. He didn’t see the need to communicate with the chairmen of the factions and simply ran away from the conversation. He was in the office of the chairman of the Verkhovna Rada [Andriy Parubiy].
Today, November 26, parliamentarians gathered to approve the presidential decree on the introduction of martial law in Ukraine. But it did not work out. The deputies who blocked the rostrum demanded clarification. Then the deputies went on break.
[End, news account]
The reference to his appeal on facebook led me to find his Fb page. It has a picture of him standing with a mass of armed soldiery with the emblazoned text
“Martial Law For the Defense of Ukraine.”
It is in both languages, Ukrainian, and English, which I paste below. Note that in saying “as soon as the Russian soldier crosses the border” is an admission that there is not now a Russian soldier in Ukraine:I thank the Ukrainian deputies for the support of my decree on the introduction of a martial law in Ukraine for a period of 30 days.
The introduction of a martial law is foreseen only in the case of the regular Russian troops’ ground operation outside the JFO and illegally annexed Crimea in the regions along the Russian border, the Transnistrian part of the Ukraine-Moldova border and along the Black and Azov seas. These are Vinnytsia, Luhansk, Donetsk, Zaporizhia, Mykolaiv, Odesa, Sumy, Kharkiv, as well as Chernihiv, Kherson regions and internal waters of the Azov-Kerch water area. These are locations that could be targeted.
If we manage to avoid this scenario, the rights and freedoms of Ukrainian citizens will not be limited. The decree envisages the right of the President, as soon as the Russian soldier crosses the border, not to lose a second to ensure the protection of the Ukrainian land.
__________________
*This word is apparently slang, i.e, “President Slangword”. It is not to be found in my Oxford Russian Dictionary.

Posted by seemorerocks at 15:46