The flow of warmer, salty water into the Arctic 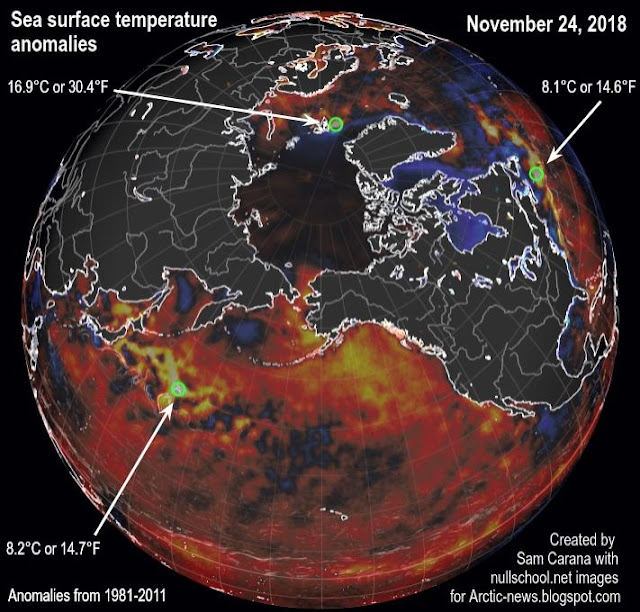 In the North Pacific, the flow of warmer water is clearly visible (see image above, bottom left circle). In the North Atlantic, huge amounts of heat are moving into the Arctic Ocean (top right circle). At some spots, heat that is traveling underneath the sea surface comes to the surface (top left circle). 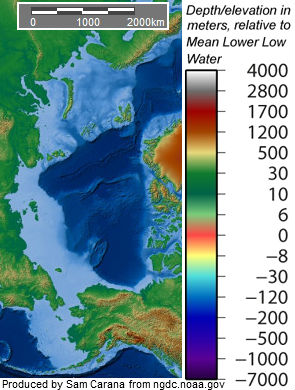 Most warming caused by people's emissions goes into oceans, especially into the top layer of oceans.


Furthermore, warmer air and warmer sea surfaces can cause winds to grow dramatically stronger. As the Arctic is warming much faster than the rest of the world, the narrowing difference between the temperatures at the North Pole and the Equator is decreasing the speed at which winds circumnavigate Earth; at the same time, the amount of heat that is moving north can grow dramatically, both due to winds and sea currents, and cyclones can further accelerate this.

The danger is that an influx of warm salty water will reach the seafloor and trigger methane eruptions.

The situation is especially critical in many parts of the Arctic Ocean where the water is very shallow. Some 75% of the East Siberian Arctic Shelf (ESAS) is shallower than 50 m.

The danger here is huge, for at least five reasons:

• shallow waters can warm up very rapidly in case of an influx of warm water; 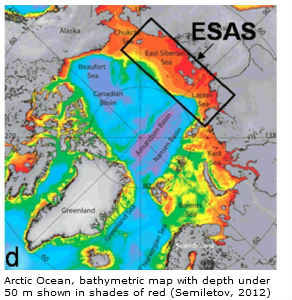 • these shallow seas are now covered by ice, so the heat cannot escape to the atmosphere;

• sea ice is very thin, so the sea ice won't act as a buffer to absorb the heat;

• methane rising through shallow waters will pass through the water column and enter the atmosphere more quickly;

• in shallow waters, large abrupt releases will more quickly deplete the oxygen in the water, making it harder for microbes to break down the methane.

The videos below further illustrate the dangerous situation in the Arctic.


The video below contains another part of this talk.

The situation is dire and calls for comprehensive and effective action, as described at the Climate Plan, i.e. multiple lines of action implemented in parallel and locally where possible.

• As El Niño sets in, will global biodiversity collapse in 2019?
https://arctic-news.blogspot.com/2018/11/as-el-nino-sets-in-will-global-biodiversity-collapse-in-2019.html

• Can we weather the Danger Zone?
https://arctic-news.blogspot.com/2018/07/can-we-weather-the-danger-zone.html

• Warning of mass extinction of species, including humans, within one decade
https://arctic-news.blogspot.com/2017/02/warning-of-mass-extinction-of-species-including-humans-within-one-decade.html
Posted by seemorerocks at 20:05