Atlantic Council: US should send ships to Azov Sea 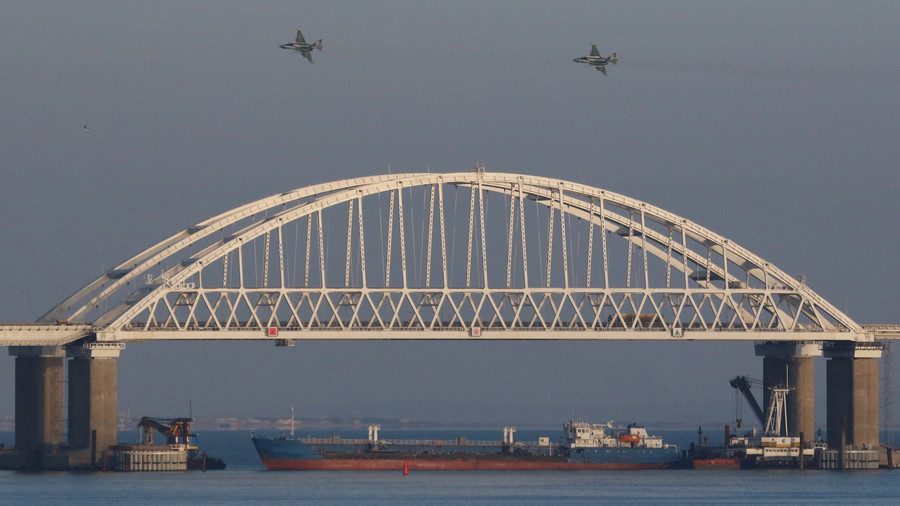 A senior fellow at the pro-NATO Atlantic Council has said the US should send naval ships into the Sea of Azov to guarantee it stays open after a skirmish between Russian and Ukrainian ships. Only problem is, that would be illegal.

Anders Aslund, a Swedish economist who lives in Washington D.C. and works for the avidly anti-Russia think tank, implored the US and NATO to “react sharply” to what he called “the illegal Russian blockade of the international Sea of Azov.”

Anders Åslund@anders_aslund
What is the EU going to do about the illegal Russian blockade of the international Sea of Azov? Instant action is called for! @FedericaMog @JunckerEU @eucopresident
166
5:27 AM - Nov 26, 2018
Twitter Ads info and privacy

Anders Åslund@anders_aslund
Everything suggests that Russia slowly takes one step after the other to block the Azov Sea off from Ukraine & international shipping. The West & NATO should react sharply before it is too late.
Alex Kokcharov@AlexKokcharov
#Russia|n media report that Russian #warplanes are being deployed to the area of #Kerch Strait, which connects the #SeaofAzov & the #BlackSea: this is another step in the #Kremlin's escalation against #Ukraine:https://www.vedomosti.ru/politics/news/2018/11/25/787373-o-napravlenii-samoletov?utm_campaign=vedomosti_public&utm_content=787373-o-napravlenii-samoletov&utm_medium=social&utm_source=twitter …
861
3:16 AM - Nov 26, 2018
Twitter Ads info and privacy

736 people are talking about this
Twitter Ads info and privacy
Aslund’s suggestion came after Russia opened fire on and seized three Ukrainian navy boats on Sunday, accusing them of breaching the Russian maritime border.

The Ukranian vessels were sailing between two Ukrainian ports: from Odessa in the Black Sea to Mariupol in the Azov Sea. The only waterway that connects these is the Kerch Strait between Crimea and mainland Russia. Kiev says it notified Moscow in advance that its navy ships would be sailing through the area. Moscow denies that it was given warning.

While both Russia and Ukraine have freedom of navigation in the Kerch Strait under a 2003 treaty, there are detailed technical rules on how vessels should pass through the narrow, complex waterway. All traffic in the area is controlled by the Crimean sea port of Kerch, and every ship should contact the facility, report her route and destination, and receive permission to sail through the Strait.
Unfortunately for the Swedish economist, though he tweets with all the authority of someone who was on the ships in question himself, it seems he is lacking in this basic knowledge about the legality of his proposal.

Luckily, chief foreign affairs correspondent for The Wall Street Journal, Yaroslav Trofimov, stepped in to help out, tweeting that aside from the “practical risks” which might arise from US ships rushing into the kerfuffle, it would also be “illegal without Russian permission.”

Yaroslav Trofimov✔@yarotrof
Practical risks aside, it would be illegal without Russian permission according to the 2003 treaty between Russia and Ukraine that declared Azov to be “internal waters” and only guaranteed freedom of navigation for RUS and UKR military vessels. http://www2.ecolex.org/server2neu.php/libcat/docs/TRE/Full/Other/TRE-149547.doc …
Atlantic Council✔@AtlanticCouncil
NATO and the United States should send in naval ships in the Sea of Azov to guarantee that it stays open to international shipping, says @anders_aslund.

45 people are talking about this
Twitter Ads info and privacy
Trofimov cited the 2003 treaty between Russia and Ukraine which declared the Azov Sea to be “internal waters” and which only guarantees freedom of navigation for Russian and Ukrainian military vessels.

There is a practical problem with the proposal as well: the Azov Sea is simply too shallow. US Navy’s Arleigh Burke-class destroyers have a draft of 9.3 meters (30 feet), while the *average* depth of the Azov Sea is only 7 meters (23 feet), with the deepest point being twice that.

Aslund, who frequently raises eyebrows among more knowledgeable Russia experts and is known for his dramatic hot takes on Twitter, also compared the incident to Adolf Hitler’s invasion of Poland — so the complexities of reality are unlikely to deter him.

Anders Åslund@anders_aslund
That is what people said when the allies declared war on Hitler after his invasion of Poland.
21
10:41 AM - Nov 26, 2018
Twitter Ads info and privacy

31 people are talking about this
Twitter Ads info and privacy
He also claimed that a quiet response to the incident from US officials meant that President Donald Trump must have“strictly ordered” US officials not to speak about it.

Anders Åslund@anders_aslund
Replying to @craigunger
By the end of the day, not one single US official has said a word against Russia's aggression in Ukraine. That can only mean that they were strictly ordered by POTUS not to do so. Why is POTUS supporting Russian aggression in Ukraine?!
44
5:38 PM - Nov 26, 2018
Twitter Ads info and privacy

Leonid Ragozin@leonidragozin
Side show? I thought Western support of Ukraine was about democratic values, not geopolitical machinations. I very genuinely did.
Atlantic Council✔@AtlanticCouncil
If the West does not react—and if Western media facilitate this by focusing on sideshows like "Martial Law"—then Putin will have won another gamble, says John Herbst, a former US ambassador to Ukraine. http://www.atlanticcouncil.org/blogs/ukrainealert/q-a-russia-attacks-ukraine-again-how-should-ukraine-nato-and-the-west-respond …
35
5:11 AM - Nov 27, 2018
Twitter Ads info and privacy

18 people are talking about this
Twitter Ads info and privacy
The Atlantic Council fellow also found himself in a heated spat with multiple Moscow-based journalists and correspondents last week after he scolded a Washington Post reporter for daring to write an article suggesting that some Ukrainians harbored positive feelings toward Vladimir Lenin.

192 people are talking about this
Twitter Ads info and privacy
Journalists from the Washington Post, Financial Times and the Guardian were unimpressed that Aslund appeared to be implying that Moscow-based journalists are unable to write authoritatively about Ukraine and that they should refrain from criticizing the country, lest it offend him or his group of friends.

Shaun Walker✔@shaunwalker7
Replying to @anders_aslund and 4 others
Im not trying to teach anyone, let alone Ukrainians. Just curious why a Swede who lives in DC and goes to occasional conferences in five-star hotels should lecture a journalist, whether he be based in Moscow or on Jupiter, who’s gone and spoken to real people about their views

Shaun Walker✔@shaunwalker7
Replying to @anders_aslund and 3 others
Anders, have you considered that these correspondents you so despise talk to a much broader range of Ukrainians than you? Or you think only nationalists/liberals/reformers worth listening to? & how can you say that how Ukr deals with Soviet legacy/nation building is unimportant?!
41
5:59 AM - Nov 19, 2018
Twitter Ads info and privacy

max seddon✔@maxseddon
Replying to @PaulSonne and 3 others
Anders, the point isn’t that Ukrainians are necessarily longing for Lenin - it’s that decommunization has created a void that remains as yet unfilled, as evidenced by Anton’s talks with ordinary Ukrainians. Which his living in Moscow has nothing to do with
71
6:12 AM - Nov 19, 2018
Twitter Ads info and privacy

Paul Sonne✔@PaulSonne
Replying to @anders_aslund and 2 others
Saying Ukrainians are still figuring out what to put on town squares in place of Lenin statues is *not* suggesting all Ukrainians miss Lenin monuments. Nor is that quote.
37
5:49 AM - Nov 19, 2018
Twitter Ads info and privacy

See Paul Sonne's other Tweets
Twitter Ads info and privacy
Russian journalist Alexey Kovalev also waded into the debate to remind Aslund that debate around post-Soviet identity in Ukraine is alive and well, regardless of how he personally feels.

Alexey Kovalev✔@Alexey__Kovalev
Have I got bad news for @anders_aslund
Fabrice Deprez@fabrice_deprez
Replying to @fabrice_deprez
Meanwhile, "Ukrainians view Brezhnev more positively than Bandera" 47% of positive opinions for the Soviet leader, but just 36% for the head of the Ukrainian nationalist organization https://www.pravda.com.ua/rus/news/2018/11/20/7198776/ …
44
2:34 AM - Nov 21, 2018
Twitter Ads info and privacy

See Alexey Kovalev's other Tweets
Twitter Ads info and privacy
Since the Kerch Strait incident, Ukrainian President Petro Poroshenko has imposed martial law in the country — a move which could allow him to call off scheduled elections and remain in power. Moscow has accused Kiev of provoking the entire incident to win sympathies in the West and to help Poroshenko remain in office.