I cannot support Loomer for being a militant zionist and supporter of Israel’ s policies but I do support her in this.She is showing guts in standing up to the social media giant

Laura Loomer has handcuffed herself to @Twitter's New York headquarters front door to protest them censoring her! #Awesome! 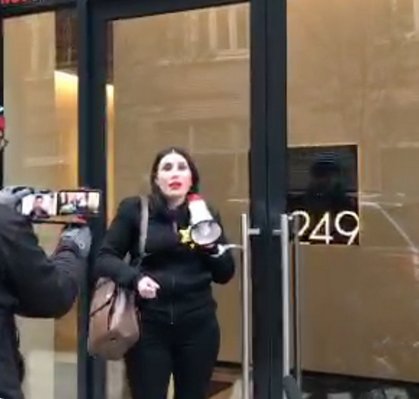 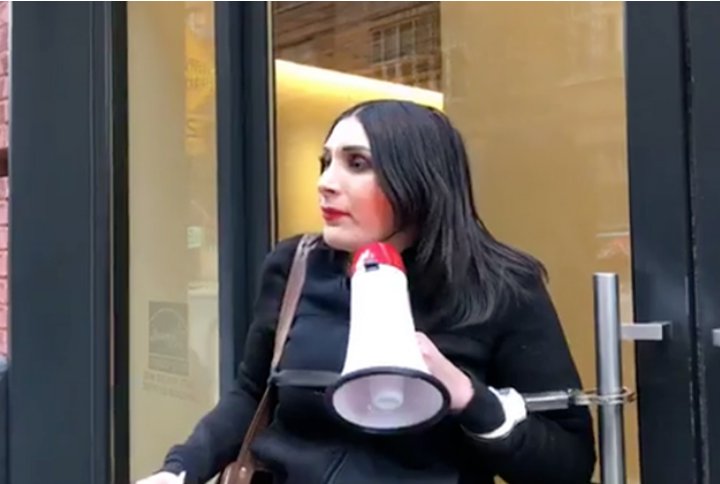 Laura Loomer, a far-right activist who tweeted anti-Muslim remarks about Minnesota Rep.-elect Ilhan Omar, handcuffed herself to Twitter's HQ after the company kicked her off the platform

In response to getting kicked off Twitter, far-right conservative Laura Loomer chained herself to the platform's Manhattan headquarters Thursday night.
Livestream video posted to Periscope on Thursday night captured Laura Loomer, who had handcuffed to the glass doors leading into Twitter's Manhattan headquarters. It didn't take long before a crowd and police gathered, and the street was closed off.
At its peak, the Periscope live stream had almost 10,000 viewers.
Read more: Uber and Lyft bar far-right activist who complained about Muslim Uber drivers
"It's almost as if Twitter hates Jews and conservatives," Loomer said during her protest. "When is Jack Dorsey going to stop censoring conservatives? When am I going to get my Twitter back? I'll be here as long as it takes."
Loomer ended her stand shortly after 6 p.m., when she asked police to cut off her handcuffs after a little more than two hours of protest. 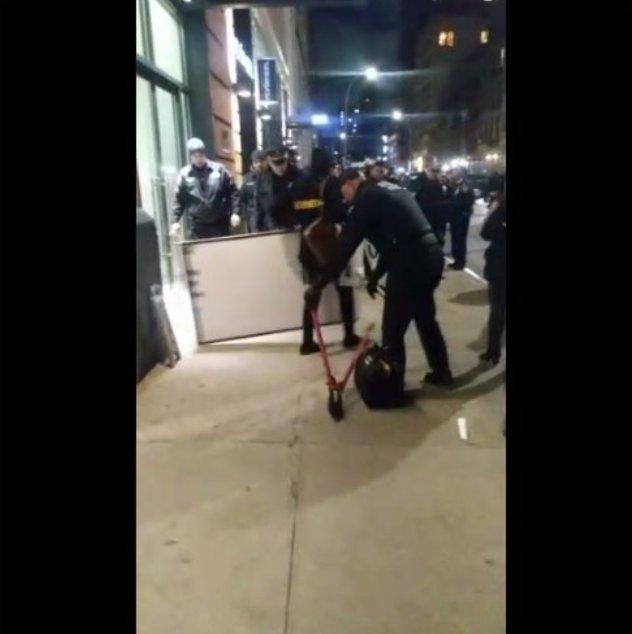 Will Sommer✔@willsommer
Replying to @willsommer
Laura Loomer ended her Twitter protest, got cut out of the handcuffs. But she did not get her Twitter account back.
4,999
12:11 PM - Nov 30, 2018

1,596 people are talking about this
Twitter Ads info and privacy
Twitter permanently banned Loomer from the platform in November after a tweet she sent about Minnesota Rep.-elect Ilhan Omar. In a post on her website, Loomer published a screenshot of the message Twitter sent her, saying she had violated the platform's rules on "hateful conduct."
Loomer tweeted that Omar, one of first two Muslim women elected to Congress, was "anti-Jewish" and that her religion pushed homophobia and abuse of women. Laura Loomer
Facebook followed suit, but has only issued a temporary 30-day ban.
This isn't the first time Loomer has tried to capture the attention of Twitter CEO Jack Dorsey. When Dorsey testified in front of Congress in September, she interrupted the hearing to call the CEO a "liar."
"We have notified the relevant authorities who are responding," Twitter said in a statement to Business Insider. "The account holder was suspended for violating our policies. We apply the Twitter Rules impartially and not based on ideology."
Loomer's behavior has also led to similar bans in the past. In late 2017, Uber and Lyft both kicked her off their ride-hailing platforms for a series of tweets Loomer posted about Muslim drivers for the platforms.
"I'm late to the NYPD press conference because I couldn't find a non Muslim cab or @Uber @lyft driver for over 30 min! This is insanity," Loomer wrote.
Read more: Uber and Lyft bar far-right activist who complained about Muslim Uber drivers
Loomer has also accused Twitter of holding up a "double standard" that allows anyone on the platform who is liberal or Muslim to do "whatever they want." During her protest, Loomer wore a Jewish star reminiscent of the Holocaust as a symbol of what she says is rampant anti-Semitism on Twitter.
Police informed Loomer that Twitter says it won't press charges against her for chaining herself to its headquarters., and that she's allowed to stay chained to the door as long as she wants. According to the New York Civil Liberties Union, protesters cannot block the entrance into a building under New York City law.
Loomer said she didn't have a key to unlock her handcuffs and the chains would need to be cut off. Police officers offered early on to cut the chain off for her if she wanted.
"I wish I could give you an answer, but Facebook and Twitter won't let me speak," Loomer said on the livestream.

Check out the livestream below:

971 people are talking about this

Listen to Loomer go head-to-head with George Galloway earlier in the year
Posted by seemorerocks at 15:27