Anthrax outbreak in Siberia due to extreme heat 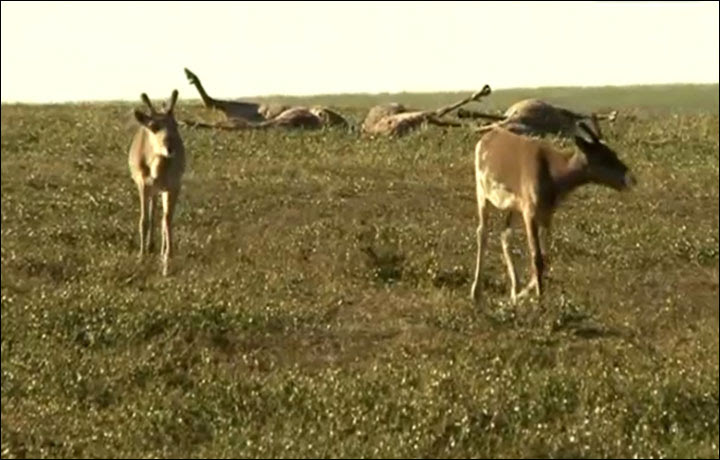 Up to 1,200 deer have been lost in the Yamalsky district in Yamalo-Nenets autonomous region, as urgent action is underway to inoculate 'at risk' nomads including children. A total of nine have been hospitalised, including four children, with two of those in intensive care suspected of suffering from dangerous anthrax.

It is the first outbreak of deadly infection anthrax in 75 years, and a strict quarantine regime was put in place by governor Dmitry Kobylkin, including mass evacuation of herders most at risk, and their families.

Initially it was thought a heat wave in the tundra region, which straddles the Arctic Circle, was responsible for sudden  reindeer deaths.

Now it is feared anthrax has played a major part in the deaths. 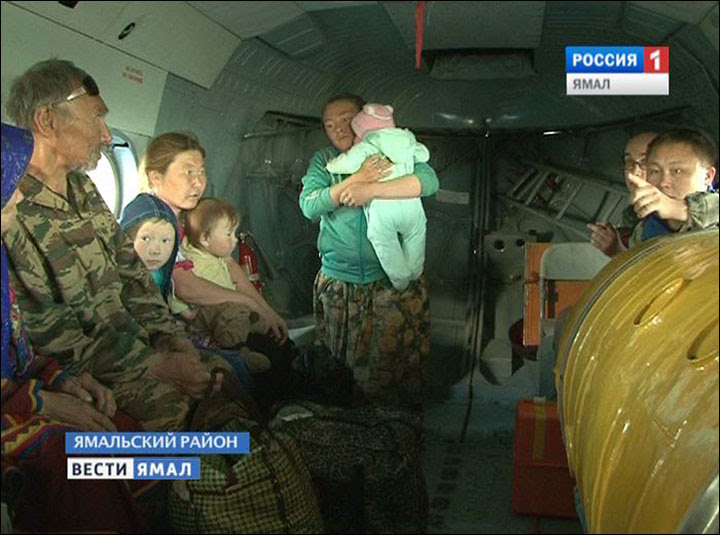 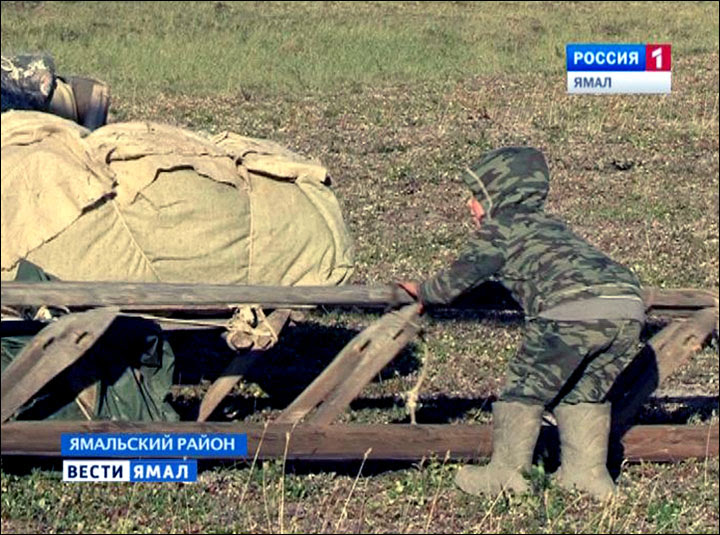 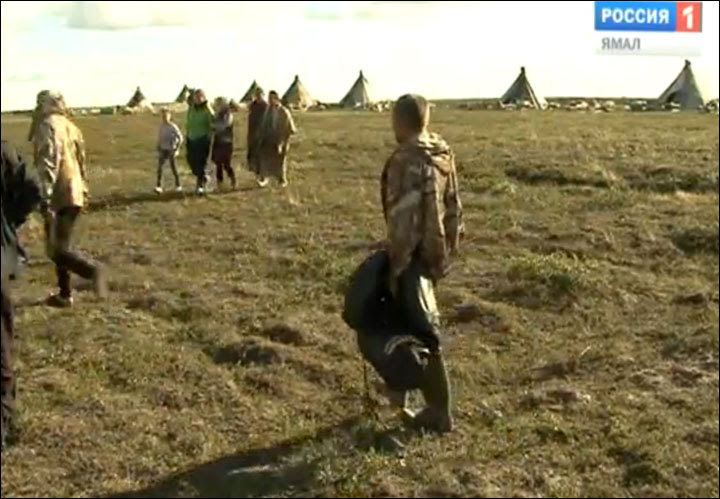 People evacuated from the area. Pictures: Vesti Yamal
Deep concern focuses on  nomadic herders and their families in the Tarko-Sale
Faktoria camp, above the Arctic Circle and close to the Yaro To lake, some 340
kilometres north-east of regional capital Salekhard.

We are indebted to Prof Florian Stammler, Arctic Centre, Lapland, Rovaniemi,
Finland - who knows the area well - for clarifying initial confusion over the location
of the outbreak.

'There is a doctor near the breeders - there are 63 of them - who monitors their
health condition,' said a statement from the governor's office. 'As a preventive
measure all the nomads from the area will be flown to another part of the tundra for preventive inoculation.

'A helicopter has already been sent to their camp.'

Gazprom Dobycha Nadym agreed to provide the helicopter -  and children were to
be placed in a a boarding school in Yar-Sale temporarily.

Mass vaccination of 'all nomads of Yamal district' has not been ruled out. Some
1,200 reindeer have been lost so far but it is unclear how many of these to anthrax,
and how many to heatstroke following unusually hot weather with temperatures of
30C or more.

Young reindeer are being culled due to the demise of their mothers, leaving them
unable to feed.

'Based on a comprehensive analysis, experts confirmed that the mortality of the
reindeer is caused not only by heatstroke [the animals are unaccustomed to such high temperatures] but also by a sickness - anthrax,' said the report. 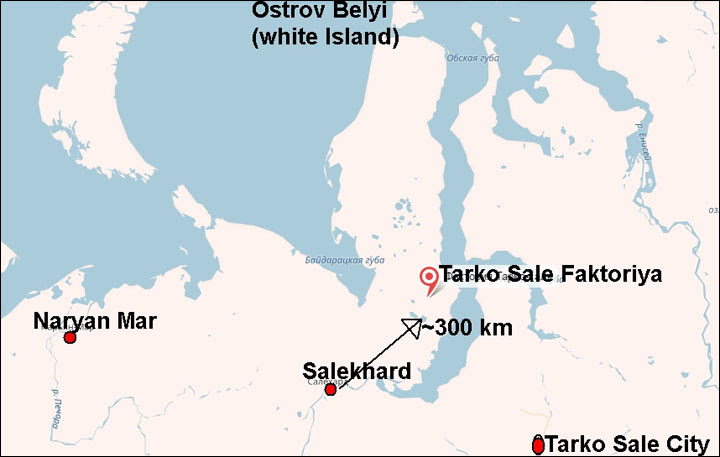 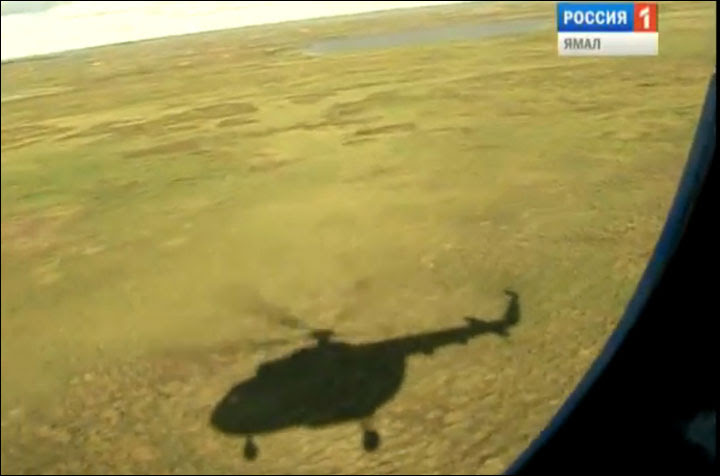 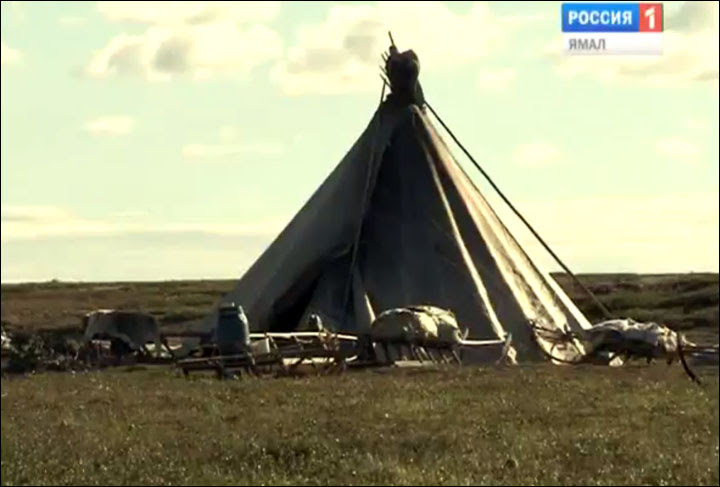 The herders will have to avoid this area for a few decades. Picture:
Vesti Yamal
The contamination of a disease that can remain infectious for more than a century
could have been from a herd uncovering the burial place of an infected reфndeer
from the past.

'There are no cattle mortuaries in the area but considering the viability of the
infectious agent of anthrax - 100 years and more - and its resistance to the change
of temperatures professionals assume that animals looking for food came across
the site of an animal that died of anthrax and then infected each other. Therefore
the locality - a reindeer path - will be fenced off.'

Measures are now being taken for the disposal of the dead animals. Health
animals from the affected herd will undergo additional vaccination.

Money for clearing the area will be assigned from budget reserves of the Yamalo Nenets autonomous district.

Every dead animal will be burnt separately in the location where it died.

However, Vyacheslav Khritin, head of Salekhard Vet Centre, said; 'We will  have to dispose the calves born this year that are left without mothers. All the corpses that
died over some four or five kilometres, we'll gather them and will build a large cattle cemetery.'

A reliable cemetery will be built with special equipment that will only reach the
location only in a few days. And herders will avoid the area for a few decades.

They won't be burnt all together not to spread the disease. Samples of infected
animals were sent to additional analysis to Moscow. 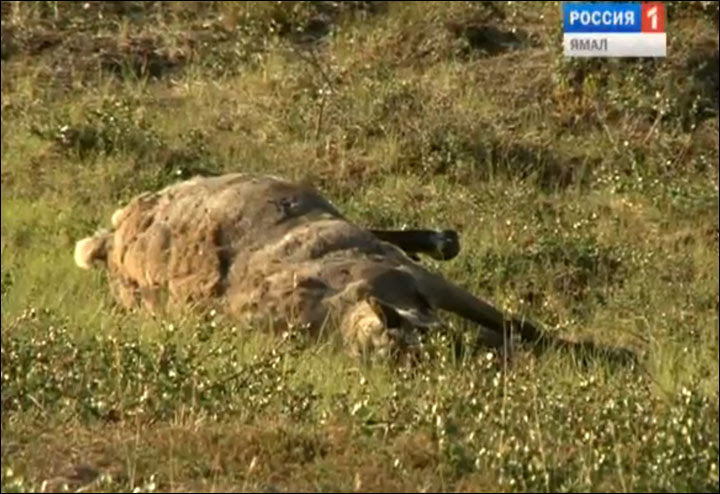 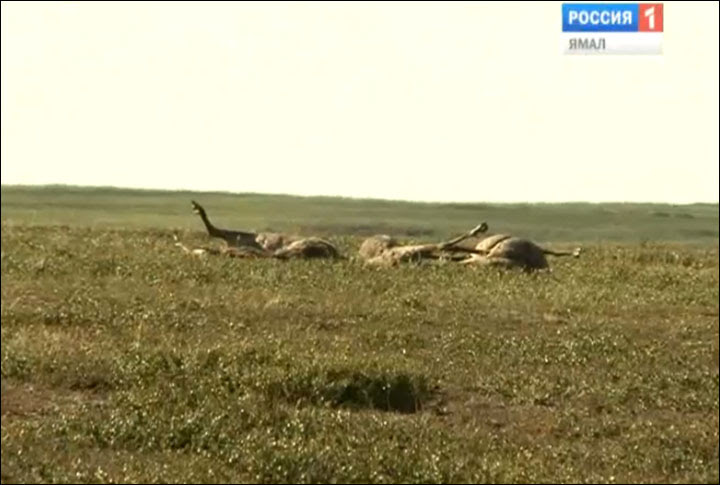 Anthrax is an infection caused by the bacterium Bacillus anthracis. Picture:
Vesti Yamal
A spokesman for the governor said: 'This case won't affect exports or the quality of
meat.'
Most exports go to Germany, Sweden and Finland. This case is local, it is about
one one centre - Yaroto lake in Yamalsky district.

'No other centres (of anthrax infection) have been discovered.

'Control and safety measures have been restricted across the whole region. There
is no single chance that infected venison will make it to slaughter complex: all of
them, each and every patch is thoroughly checked in line with the highest standards.

We're interested in exporting high-quality venison just like it has always been. Our
long-term history with foreign partners says that we are trusted and our reputation
is precious. We're hoping that this situation will not impact on attitudes towards
Yamal products.'

Anthrax is an infection caused by the bacterium Bacillus anthracis. Among its forms are inhalation, which leads to fever, chest pain, and shortness of breath. The intestinal
form presents with nausea, vomiting, diarrhea, or abdominal pain.

Until the 20th century, it killed hundreds of thousands of people and livestock each year.
Anthrax has been developed as a lethal weapon in the past.

you can read a bit more detailed comment here:

Please note there is a slight confusion about the exact location of this incident.
Ignore the maps in this Siberian times article. We are actually witnessing this on
the YAMAL PENINSULA close to the FAKTORIA (trading post) Tarko Sale, which
is close to the Yaro To lake. This is not to be confused with the other (bigger)
Tarko Sale, administrative centre of the Purovski District in Yamal-Nenets
Autonomous Okrug. The proper location and latest news about this can be found
here for example:
http://www.interfax.ru/russia/520347

I have myself moved together with private herders around the Yaro To lake. The
location is an important passway for many reindeer nomads, used in all seasons:
The nomads with the furthest longest migration routes use it in early May, just
before calving time, moving up North in spring towards their summer pastures. The second "wave" of herders use this location as a summer site, where they group with several households uniting many small herds into a big one for withstanding
mosquito harrassment. People stay close to the Yaro To lake for fishing there in
summer. In autumn the site is again used as a passway for herders returning from
their summer pastures south heading towards the slaughtering sites in the south of
the Yamal Peninsula. In winter, some private herders use the site and get supplies
from the trading post in Tarko Sale.

This shows that the place is very intensively used. Due to the high mobility of
herders using this site, utmost care has to be taken for preventing of anthrax being
spread all over the Yamal Peninsula

Unusually high temperatures in a northern region of Russia thawed the carcass of a reindeer, which has led to an outbreak of anthrax in the Yamalo-Nenets region Western Siberia.

“Considering the viability of the infectious agent of anthrax - 100 years or more - and its resistance to the change of temperatures professionals assume that animals looking for food came across the site of an animal that died of anthrax and then infected each other,” the regional governor’s office said in a statement to the Siberian Times.

More than a dozen people, including children, have been hospitalized and 63 people have been potentially affected by the disease, which has already killed more than 1,000 reindeer.

Pangody, in the heart of the Yamalo-Nenets region, had high temperatures of at least 82 degrees Fahrenheit 18 straight days from July 6-23, peaking at 92.7 on July 23.

The governor’s office told the Times that some of the deaths may be due to heatstroke as “the animals are unaccustomed to such high temperatures.”

“We have taken all measures to isolate the area,” regional Governor Dmitry Kolybin told the Associated Press. "Now the most important thing is the safety and health of our fellow countrymen — the reindeer herders and specialists involved in the quarantine."

A mass vaccination of reindeer is currently underway in the region, but it may be too late, Vladimir Bogdanov, a biology professor with the Russian Academy of Sciences, told NBC News via the RBC news website.

The appearance of the disease is the first fatal anthrax outbreak reported in Russia for 75 years.

Yamal authorities stopped vaccinating reindeer 10 years ago, NBC reports, because there had been no outbreaks for more than half-a-century - a mistake, Bogdanov said.

Measures are now underway for the disposal of the dead animals, which are strewn over more than 3 miles, Vyacheslav Khritin, head of Salekhard Vet Centre, told the Siberian Times.

Most of the reindeer in the area are raised as a food source, and the meat is exported to Germany, Sweden and Finland. A spokesman for the governor’s offices told the Times that safety measures have been tightened across the entire region.

“There is no single chance that infected venison will make it to slaughter complex: all of them, each and very patch is thoroughly checked in line with the highest standards,” the spokesman said. “We're interested in exporting high-quality venison just like it has always been.”

This was reported several days ago on Russian television