Siberia's wildfires seen from 1 million miles away: even the tundra is burning

Greenpeace claim authorities underestimate the scale of destruction, amid warnings of lack of resources to fight fires. 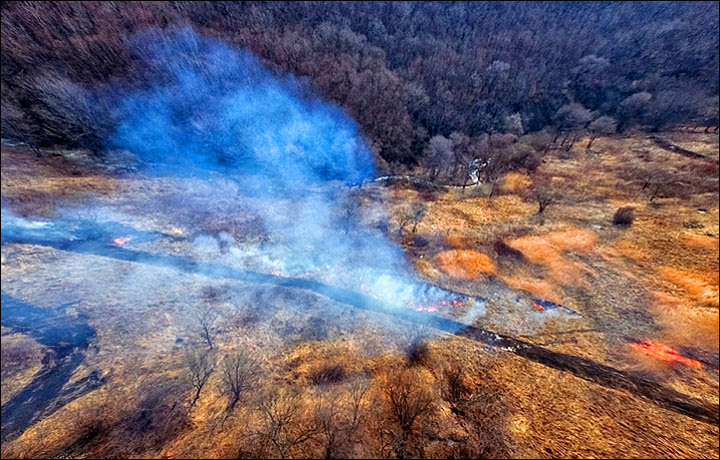 These exceptional images show how the smoke trails of wildfires over Siberia can be seen from outer space. The pictures were made by the EPIC camera on NOAA's Deep Space Climate Observatory spacecraft some 975,074 miles - or 1,569,229 kilometres from Earth on 21 July this year.

Hovering between the Earth and the Sun, the evidence on such images suggest that the smoke cover is extensive, yet Greenpeace accuses the Russian authorities of massively under reporting the scale of the annual wildfires.

Other satellite images confirm the extent of the fires, for example the Suomi NPP spacecraft, orbiting 512 miles (824 km) above Earth.

Experts claim that such images show fires are 10 times more widespread than acknowledged by the Russian government. 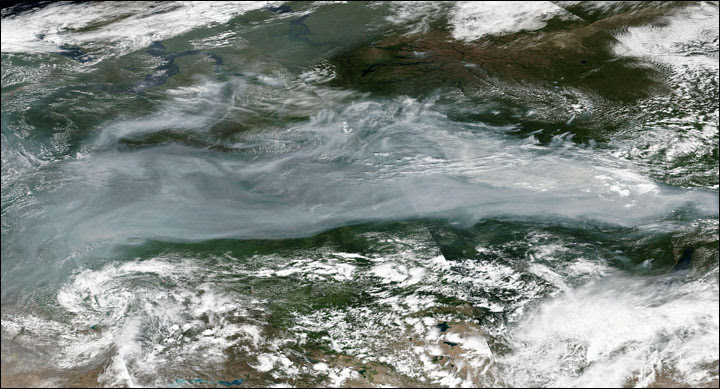 Smoke from wildfires in Siberia seen from million miles away. Pictures: EPIC camera, NOAA's Deep Space Climate Observatory
Currently, as we outline below, there are worrying reports of the tundra burning in the Arctic Yamal Peninsula, as well as other damaging fires, for example a 3,000 hectare blaze at the  Lena Pillars Nature Park - a UNESCO World Heritage Site - which was finally extinguished in recent days in Yakutia, also known as Sakha Republic.

Ecologists say the fires pose a direct threat to the role of Siberian pristine Boreal forests in  absorbing climate-warming emissions.

And as the weather turns drier and warmer, the forests become more prone to wildfires. Annually the Russian forests absorb a net 500 million tonnes of carbon from the atmosphere, equivalent to the emissions put off over a year by 534 coal-burning power plants.

Yet 'forest fire danger and carbon emissions will double or triple by the end of the century', expert  Anatoly Shvidenko, who served on the UN's Intergovernmental Panel for Climate Change (IPCC), told AFP. 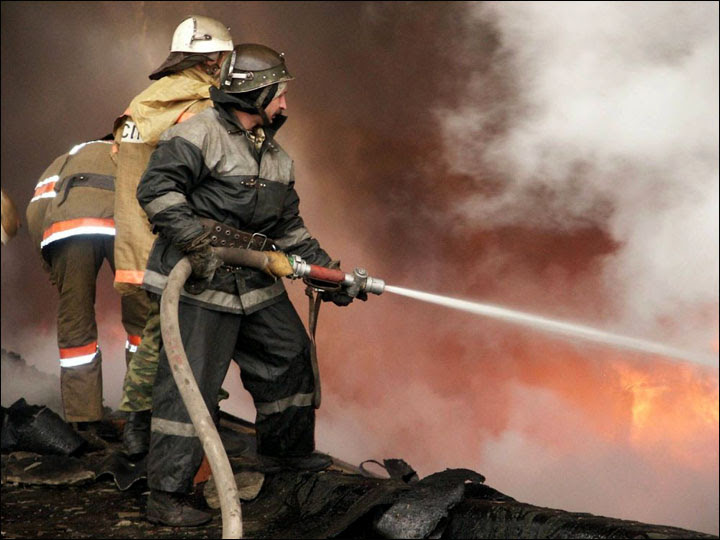 Wildfires in Yamal Peninsula which is mostly above the Polar circle. Picture: Russian Ministry of Natural Resources
The thinning of the forests is most acute in northern Siberia where fires can ravage plant life and shallow roots, making it impossible for trees to regrow for centuries - a process known as 'green desertification'.

'Everywhere it's the same scenario, where a small fire is ignored and then goes out of control.'

This is exactly the case in the recent fire at the  Lena Pillars Nature Park, said local experts. There were claims that the late discovery of hot spots in the area, a significant tourist location, allowed the wildfires to take hold, destroying pristine forest.

Some 133 people were involved in fighting this outbreak of wildfire, including paratroopers, local volunteer firefighters, and employees of chemical firefighting stations.

The fires here started on 28 June and were finally put out on 21 July. 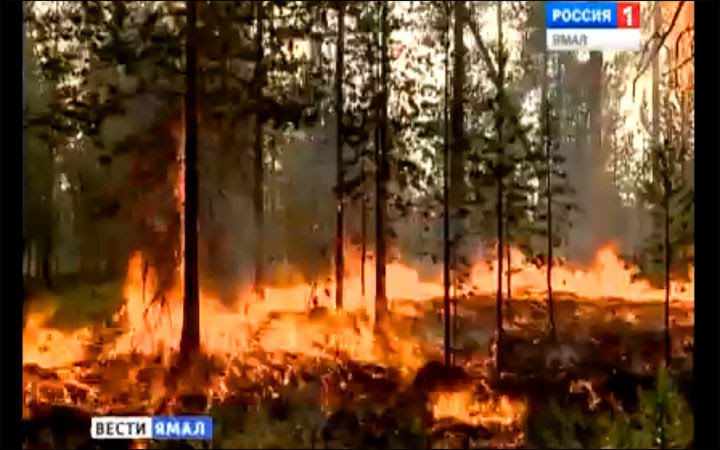 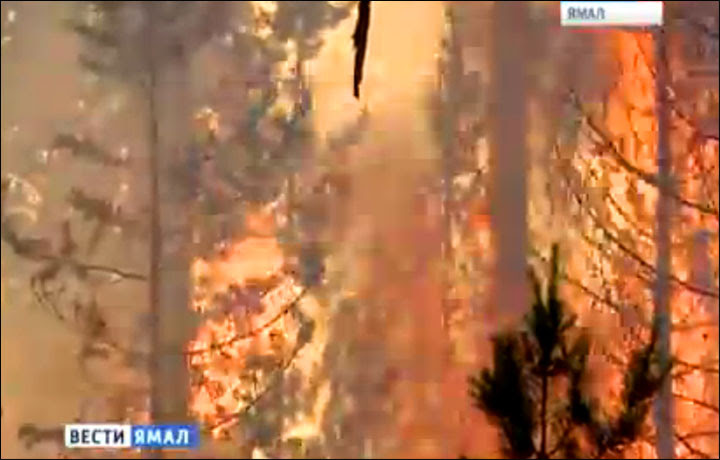 Yakutia has witnessed 109 wildfires covering 8,000 hectares so far this year. As Kuksin claimed, drier and hotter summers have extended the fire season in Russia, but 99 percent of wildfires are still caused by humans and the government should do more to prevent them.

'If they start reacting on time to small fires, everything will be okay,' he claimed.

Concern is also growing about other regions in Siberia and the Russian Far East where large summer wildfires are an annual threat to nature and wildlife.

Boris Volovod, an emergencies official in Tazovsky district, said: 'There is no threat to people and settlements (but the) situation is complicated. It is related to the latest weather conditions.' 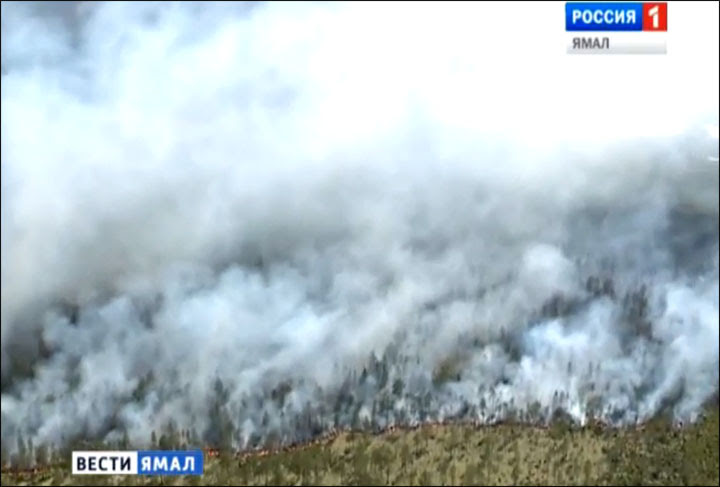 Abnormally high temperatures for this Arctic area - described as 'unbearable heat' - has been going on for six weeks. Forest and tundra has dried out and up to 10 new wildfires start every day. For example, over the past 24 hours over 1,000 hectares of forest tundra was affected by wildfires.

Wildfires have also forced Yamal's nomadic population to choose alternative, safe routes to pasture their deer: they stick to water as close as possible. Over 600 people are involved in firefighting. Up to 16 aircraft are involved with local chiefs calling for federal assistance with rescuers from three other regions arriving to counter the burning tundra.

Local official Yulia Chebotaryova said: 'An Il-76 (aircraft) will be involved to extinguish wildfires in Nadymsky district. It can carry up to 42 tons of water at a time.'

Alexey Yaroshenko, head of forest department of Greenpeace Russia, said: 'In the next few days the situation in burning areas of Krasnoyarsk region will get considerably worse. The area of active wildfires is growing quickly and covers a larger territory.' 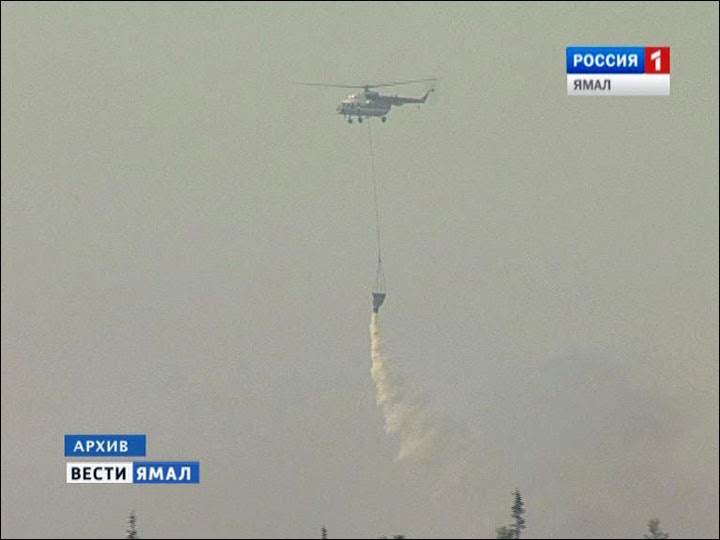 Smoke from Krasnoyarsk fires has spread to a dozen other regions, it has been reported. Locals complain about the strange smell of smoke, possibly caused by a mixing with industrial emissions in some areas.

A so-called 'Black Sky' regime - when industrial emissions are limited - was declared this week.

Alexander Bruykhanov, senior researcher at the Forestry Institute in Krasnoyarsk, said: 'Wildfires in Evenkiysky District will not get extinguished until it starts raining extensively across the region. This area of country is burning quite regularly just like, for example, Yakutia.

'Large wildfires have been happening here every 10 to 30 years and in the last decades every 5-10 years because of increased anthropological pressure and global climate change. Of course it is possible to deploy all the reserves of Avialesokhrana ('aviation forest protection' service) and people from all the regional wildfire centres but it won't change the situation. The Emergencies Miinistry won't be able to help here but will only cause some extra work for foresters who will have to rescue rescuers.'

He warned: 'Having quote limited firefighting resources, it is necessary to focus on fighting fire in areas where people live and, most importantly, put more effort in prevention.' 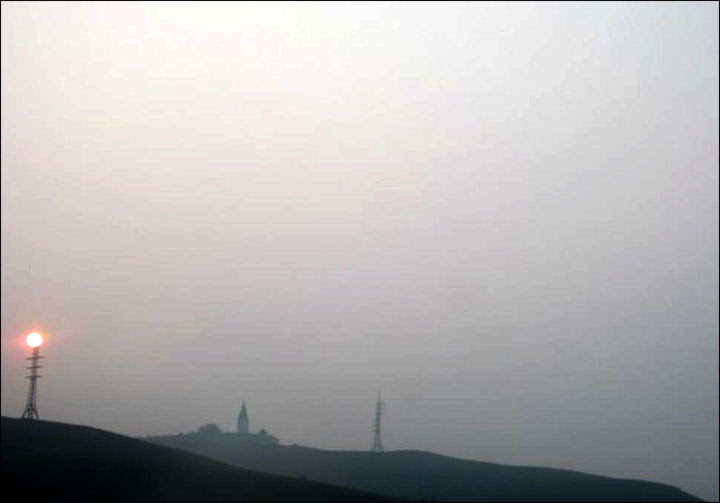 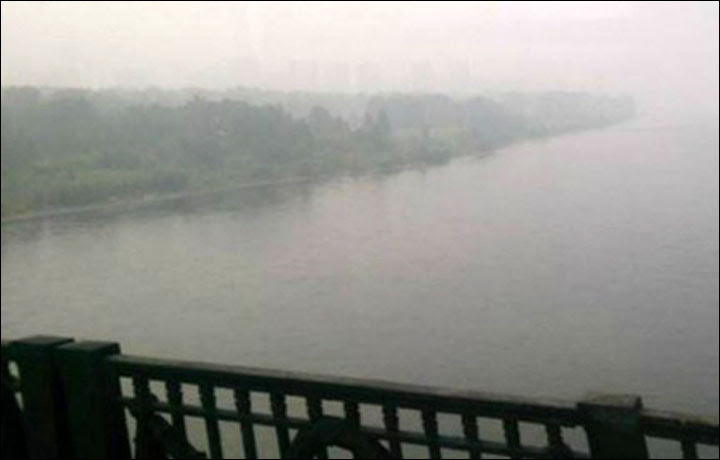 Black skies over Krasnoyarsk; air pollution was so strong that one man had to run a maraphon in a gas mask. Pictures: social networks

In Kamchatka, Greenpeace's Alexey Yaroshenko warned: 'Large forest tundra wildfires which haven't made it onto official reports continue to be active close to the villages of Ayanka and Slautnoye.'

The had been burning for more than one month, he said. 'Wildfires are burning both in the tundra and forests.'

* NOAA is the US government's National Oceanic and Atmospheric Administration.