Nuclear warships: the US is trying to seize NZ sovereignty 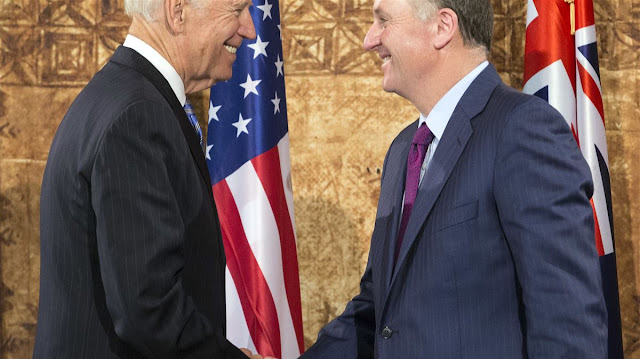 During his visit to New Zealand yesterday, US Vice President Joe Biden formally accepted an invitation for the US Navy to send a warship to the 75th anniversary celebrations of the NZ Navy in November. Prime Minister John Key said the ship’s arrival would be “a further demonstration of the strength of our close relationship, our friendship and our shared values.”

The decision marks a significant strengthening of US-New Zealand military ties as part of the Obama administration’s aggressive “pivot” or “rebalance” to Asia and preparations for war against China. Biden’s two-day stop in New Zealand followed a four-day visit to Australia, where he underscored US-Australian military relations and gave a belligerent speech asserting that America would use its “unparalleled” military strength to “ensure the sea lanes are secure and the skies remain open.”

At a press conference in New Zealand Biden similarly stated: “We are a Pacific power, we have always been a Pacific power, we are going nowhere ... Whether or not we continue to prosper and live in peace depends on our ability to maintain a free and fair and open and liberal international system on the seas, in the skies and with free and open commerce.”

These thinly-veiled threats are aimed at Beijing. Following the Permanent Court of Arbitration ruling in The Hague on July 12 rejecting China’s longstanding claims in the South China Sea, Washington has begun ramping up pressure on its allies to collaborate in its military provocations against Beijing. On the fraudulent pretexts of defending “freedom of navigation” and the “international rules-based system,” the US ruling elite is determined to subordinate the entire region to its interests.

The US naval visit would be the first to New Zealand in 33 years. During the 1980s, the Labour Party government of Prime Minister David Lange effectively banned such visits when it introduced legislation making New Zealand “nuclear-free.” The US refuses, as a matter of policy, to confirm or deny whether its warships are nuclear-powered or armed. In 1985, Lange turned down a request for the destroyer USS Buchanan to dock in New Zealand because of uncertainty about its status.

Now, in defiance of widespread anti-war sentiment, the entire NZ political establishment is embracing the full restoration of military ties, essentially brushing aside the anti-nuclear policy. The public will have no way of knowing whether the ship is nuclear-capable. Key vaguely said he would take advice from NZ officials to ensure the nuclear-free legislation is complied with. However, Biden has not specified what sort of ship will visit New Zealand and the US will continue its policy of not confirming or denying if its ships and aircraft are nuclear armed. The event will set a precedent for more naval visits as tensions escalate in the region.

The opposition Labour Party warmly welcomed the forthcoming US warship visit. Deputy leader Annette King absurdly sought to portray Biden’s announcement as “an acceptance of our nuclear-free status” which is “core to our identity and has defined us a nation for 30 years.”

Green Party co-leader James Shaw today told Newstalk ZB he supported the US ship visit because the government would be able to determine if it was nuclear-armed. Former Greens co-leader Russel Norman, now executive director of the environmental group Greenpeace, also welcomed the announcement, saying the US warship would visit NZ “on our terms.”

These statements underscore the opposition parties’ support for US imperialism in Asia and the shift to the right by a whole layer of middle class ex-protest leaders. Greenpeace played a major role in the protests against nuclear weapons’ testing in the Pacific and ship visits during the 1980s. Today, Norman hailed the return of US warships as a “historic victory for people power.”

The Labour Party held its own private talks with Biden, which undoubtedly discussed stronger military ties. Labour’s foreign affairs spokesman David Shearer told TVNZ on Wednesday that with “the growth of China and the expansion of China’s influence into the Pacific, the United States is looking more closely at the Pacific and their allies.”

The 1980s Lange government’s vocal opposition to nuclear weapons caused a public rift with the US. Behind the scenes, however, Labour oversaw a major expansion in New Zealand’s spy agency, the Government Communications Security Bureau (GCSB), which collaborates with the US National Security Agency (NSA) as part of the Five Eyes alliance. Last year Edward Snowden revealed that the GCSB has been spying on Chinese officials on behalf of the NSA.

The 1999–2008 Labour government of Helen Clark—who is seeking US support to become the next United Nations’ secretary-general—sent troops to join Bush’s criminal wars in Afghanistan and Iraq. The lengthy deployment to Afghanistan was supported by the fake left Alliance Party and, eventually, by the Greens.

Following the Obama administration’s announcement of its “pivot” against China, NZ Labour and its allies have repeatedly sought to whip up anti-Chinese xenophobia. Along with the right-wing NZ First and Maori nationalist Mana Party, Labour has scapegoated Chinese buyers for the country’s housing crisis. The trade union bureaucracy joined the denunciations of China just days before Biden’s visit after media reports accused Beijing of “dumping” substandard steel in New Zealand.

New Zealand’s National Party government has taken a less openly belligerent approach and is wary of alienating China, New Zealand’s second-largest trading partner. It has refrained from criticising China’s claims in the South China Sea. At the same time, the government is ramping up New Zealand’s involvement with US plans for confrontation. A recent Defence White Paper announced $20 billion would be spent on new military hardware to improve “interoperability” with the US and Australia. The document openly endorsed the US “rebalance” to Asia. The government has increased military training exercises with the US and sent troops to support the war in Iraq.

Like its Australian counterpart, the New Zealand capitalist class has relied since World War II on US backing to maintain its own neo-colonial sphere of dominance in the Pacific region, where it views Chinese efforts to gain influence as illegitimate. It has now fully embroiled the population in US preparations for a catastrophic war between nuclear-armed powers.

One narrative being peddled about America sending a warship to our harbour is that this is some sort of reestablishment of the US alliance with NZ as an equal and not a lapdog.

One narrative being peddled about America sending a warship to our harbour is that this is some sort of reestablishment of the US alliance with NZ as an equal and not a lapdog.

That’s one narrative.
Another narrative is that the forces building pressure in the Pacific between China and America is escalating and the fractures are starting to become apparent by the month.
America is currently trying to remove our political and economic sovereignty with the TPPA, and China are doing the same with their RCEP as both powers battle it out for influence supremacy in the Pacific.
The South China Sea decision has spiked tensions.
The billions spent in building NZs mass surveillance capabilities to extend American spying power over China need defending and Washington has sent Joe Biden to quietly read the riot act to Key.
America’s decision to end their self imposed sulk isn’t about showing US acceptance or agreement, it’s a statement to China.
What type of ship would America send?
If they were smart and really wanted dominance, they would send some type of huge hospital ship with wonderful stories of nobility and helping the sick injured children of the areas they bomb. While this ship is docked, the American’s would dazzle domestic NZ media with a host of huge parties and social events on the Ship with US celebrities. It would be American soft-power culture dominance at its most seductive and asphyxiating.
That is if they were smart.
With tensions ratcheting up in the South China Sea however America may want a show of force by sending a huge warship and just push Key into it.
All eyes will be on the type of Ship America sends.
This ship visit is a stamp of authority by America at the very time they are trying to force us into servitude to their corporate overlords. That’s why the protests against America and China sending warships here while they are trying to push us into these economic leashes is a call for independence from Washington and Beijing.
Every NZer against Trans National corporate corruption of our  democracy and everyone against the military industrial complex must descend upon Auckland in November for one hell of a show of solidarity.