Why does Donald Trump's name appear in Wikileaks' DNC spreadsheets

I was very interested to receive the following article from someone's blog. 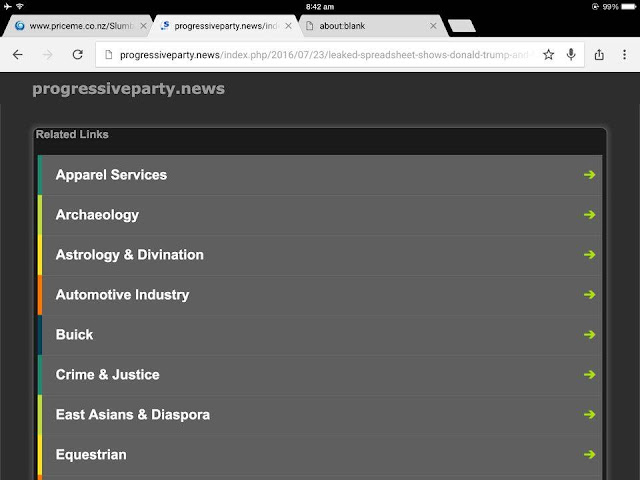 When I read it I remembered that Julian Assange when asked said that the most interesting documents were to be found in the spreadsheets.

No controlled release through the NYT or Guardian this time but a dump of documents which anyone can examine.

DOES LEAKED SPREADSHEET SHOW DONALD TRUMP AND FAMILY RECEIVING PAYMENTS FROM DNC?
The DNC is going to be having a hard time explaining this one, how did Donald J. Trump and his son, Trump Jr., end up on a DNC spreadsheet of expenses?

This file was downloaded from Wikileaks and is available here for you to examine for yourself (https://wikileaks.org/dnc-emails/fileid/10880/5421).  If you go to the properties section of the spreadsheet you will see it was created “05/21/2016, 02:48:09, Miller, Lindsey”.  Lindsey Miller is a representative of the DNC and keeps spreadsheets of fundraising and expenditures for them.  Her name is very prevalent when searching the leaked DNC documents.

The expenses range from payment for office supplies to travel expenses for Trump Jr..

Progressive Party News reached out to Lindsey Miller, MillerL@dnc.org, and asked her to explain why why Donald Trumps name appears so many times. We are holding our breath and waiting on a response.

So I am getting several reports that state that the xls spreadsheet from wikileaks,https://wikileaks.org/dnc-emails/fileid/10880/5421, is just from the FEC about Donald Trumps expenses.

My question is why is it so detailed? This is not something parties share. They may have to report what they spent to the FEC, but I find it hard to believe that the other party can see such detailed information like that “x dollars was spent for a rental car”. If there was a discrepancy that would be for the FEC to take action on not the other party.

Also why did the DNC name the file so poorly? It is a horrible naming convention “Trump May 2016.xlsx”, it should be FEC_Report_Trump_May_2016.xlsx so they can identify it. The properties should have been filled out and they are not.
In addition if it was an FEC file it would say FECfile in the header of the spreadsheet. Check it out for yourself

http://www.fec.gov/finance/disclosure/efile_search.shtml and it would not contain this much detailed information. This is not an FEC download.

There is something really fishy here

There is more on this from the Brooklyn Culture Jam

But one of the documents I was intrigued by was an Excel spreadsheet, allegedly about the hum-drum topic of Hillary’s disbursements for the campaign. It was leaked on a site called Progressive Party,and the site was down for much of Saturday and Sunday. The site make the claim that one of the Excel attachments shows disbursements to several individuals in the Trump campaign, implying that Clinton was paying for Trump’s campaign in some way. There’s a series of disbursements for ‘in kind’ services made to seven people who are identifiably part of Donald Trump’s presidential campaigns. For example, there are some seven checks for in-kind services paid out to one Matthew Ciepielowski. If you check out Mr. Ciepielowski’s LinkedIn profile, he is currently NH State Director at Donald J. Trump for President, Inc. Prior to that, he worked for Americans for Prosperity, a Koch Brothers-funded Tea Party Group; before that, he worked for Ron Paul 2012. The spreadsheet shows a total of $18,667.18 paid to Mr. Cielielowski during the month of May 2016......

It didn't take long for a "debunk" to come.

The problem is that the original source quickly became unavailable so we can't check that.

We DO have the Wikileaks emails whereas what our blog is saying is an explanation, not prima facie evidence.

So perhaps the question still remains?


Did The DNC Pay Donald Trump?


"The spreadsheet in question, listing May donations to the Trump campaign, was an attachment to an email from Lindsey Miller to the Democratic National Committee, discussing the financial status of each of the campaigns for the presidency of such diverse candidates as Chris Christie, Donald Trump, Bernie Sanders and Hillary Clinton, and organizations such as the Great America PAC and the RNC Convention Fund."...

"The great bulk of leaked emails is full of not-very-surprising facts that are not so secret after all. So did the DNC pay Donald Trump to run against Hillary? There is not a shred of evidence to support such an accusation. But it would make a good story!"

In the meantime Julian Assange is promising more

WikiLeaks possesses “a lot more” documents to surprise American voters ahead of the upcoming presidential elections - and will not hesitate to make them public.

The leak of 20,000 internal emails from the Democratic National Committee (DNC), published by the whistleblowing website on July 22 “is having so much political impact in the United States,” Julian Assange acknowledged to CNN in a Skype interview on Tuesday.

Speaking to America’s primary media outlet from the safety of Ecuadorian embassy in London, the WikiLeaks founder refused to disclose the source of the leaked batch of DNC emails, particularly avoiding denial or to confirmation of alleged Russian involvement, much talked about by Hillary Clinton’s campaign headquarters. He explained his lack of responsiveness by an obligation to protect WikiLeaks’ information sources.

Here is his interview with Democracy Now!


‪David Petraitis‪ Robin what it looks like to me, and Dan Kinch and I discussed this on another thread, is that someone in the Clinton Campaign has access to the Trump campaign's spreadsheets. I suspect a Clinton mole in the Trump campaign. Since they planted them in the Bernie campaign why not in Trump's too?‬

Dan Kinch I went through about ten of the donors in the list--pulled them up on Facebook. These are TRUMP donors. There's no reason that the DNC would have this kind of detailed info on what they gave. And the two columns are for current donation and total per cycle (to catch folks over-giving). A Democratic National Committee (DNC) official who worked on exposing recent election fraud during the Democratic primaries was found murdered this week.

Seth Conrad Rich was the Voter Expansion Data Director at the DNC and had been working on exposing the recent cases of election fraud and voter suppression during the recent primaries around the country.