Donald Trump on the deleted emails

Trump: "I Hope Russia Has All 33,000 Emails That Hillary Deleted" 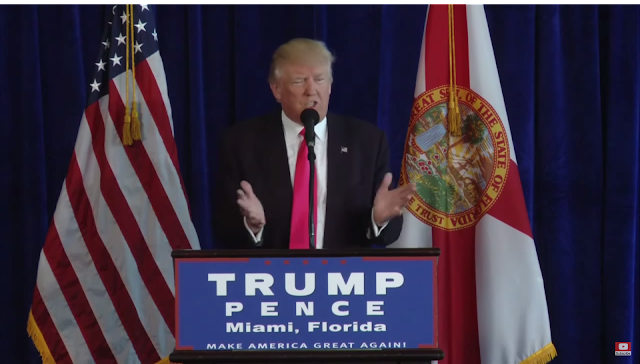 In yet another statement that is certain to spark outrage among Democrats, moments ago Donald Trump said he hopes that Russian hackers accused of breaching the DNC have obtained the tens of thousands of emails that Hillary Clinton deleted from her private email server, and that they will release them.

"If they hacked, they probably have her 33,000 emails. I hope they do," Trump told reporters on Wednesday at a press conference at his Miami-area hotel, adding that "I wish I had that power. I'd love to have that power" to orchestrate the alleged email hack and leak.

"They probably have her 33,000 emails that she lost and deleted. You'd see some beauties, so we'll see."

He continued: "Russia has no respect for our country. And that's why, if it is Russia, nobody even knows it's Russia, it was probably China. ... It shows how weak we are. It shows how disrespected we are."

Moments ago, he emphasized his position, saying on twitter if Russia has Hillary's emails, it should share them with the FBI.

Donald J. TrumpVerified account‏@realDonaldTrump
If Russia or any other country or person has Hillary Clinton's 33,000 illegally deleted emails, perhaps they should share them with the FBI!
4:16 AM - 28 Jul 2016

He also said that the Russia-DNC hacking allegations are a "total deflection" from the scandal plaguing the Democratic party. He also slammed the DNC for what was seen as conspiring against Sanders to ensure that Clinton won the Democratic nomination. "I'm not gonna tell Putin what to do. Why should I tell Putin what to do?" Trump said. "It's not even about Russia or China or whoever it is that's doing the hacking. It's about the things they said in those emails. They were terrible things."

He also accused Clinton of being in on the conspiracy. "Believe me, as sure as you're sitting there, Hillary Clinton knew about it," Trump said. "She knew everything. Debbie Wasserman Schultz could not breathe without speaking and getting approval from Hillary Clinton."

He then repeated what he has said previously, namely that "I have nothing to do with Russia."

Trump made it clear that there would most likely never be any damning revelations into his own email usage as he "almost never sends emails" as he is just not a believer in the medium.

Finally, when responding to a question whether he'd threat Putin as an adversary or an ally, he said he would rather be friendly with Russia so "we could knock out ISIS with other people. Wouldn't it be nice if we got along with Russia"

Trump's running mate, Indiana Gov. Mike Pence, released a statement after the press conference that discouraged Russian involvement in a US election.

"The FBI will get to the bottom of who is behind the hacking," Pence said in the statement. "If it is Russia and they are interfering in our elections, I can assure you both parties and the United States government will ensure there are serious consequences."


Democrats Question "Loyalty To US" Of "Treasonous, Traitor" Trump

In a full court propaganda press, enabling by a liberal media that can read polling data as well as anyone else, the 'wild conspiracy theory' that Donald Trump coordinated with Putin to hack and expose DNC emails (that prove the level of rigging and collusion that is too much to bear for many democracy-seeking citizens) has now become confirmed fact... entirely lacking any actual facts. In a desperate bid to regain the narrative, as any convention bounce is erased for Hillary Clinton, her surrogates, as The Hill reports, have now stepped it up, calling Trump "treasonous" and a "traitor," questioning "his loyalty to America."


“If they hacked, they probably have her 30,000 emails,” he said during a press conference at his Miami-area hotel. "I hope they do.

“Russia, if you are listening, I hope you are able to find the 30,000 emails that are missing. I think you will probably be rewarded mightily by the press.”

The Democrats have mobilized everyone to change the narrative away from the corruption, rigging, and collusion that is barely beneath the surface of the contentious convention... (via The Hill)


“He is inviting an aggressive country that we are really worried about to invade us,” Sen. Claire McCaskill (Mo.) said on MSNBC. "This is — this is ridiculous, and, frankly, it borders on treasonous."

"It’s terrifying he’s doing as well as he is," she added of the GOP's presidential nominee. "I don’t think this is a man who has any interest in understanding the complexity of foreign policy."

Rep. Steve Israel (N.Y.) closely echoed McCaskill’s concerns during his own interview with MSNBC on Wednesday.

“Well, that borders on treason. Never before have I heard of or seen a candidate not just for president, but for anything, invite a foreign spy agency to hack America’s computers. It’s one thing to be unfit for command, but today he’s proved he’s dangerously unfit for command."

“I just think that’s beyond the pale,” he said to CNN’s Christiane Amanpour. "I think that kind of statement reflects that he is truly not qualified to be president of the United States.”

Rep. Eliot Engel (N.Y.) said Trump’s comments may encourage further Russian meddling in the general presidential election. Russia is accused of hacking the Democratic National Committee's (DNC) emails and leaking them to WikiLeaks, which released nearly 20,000 of them last week.


But seriously, of course, Trump never lied under oath; was not responsible for the content of the incriminating emails; and, like many others (except the mainstream media), is perhaps rightly interested in whether anyone (from the NSA to Guccifer) has those 30,000 deleted emails.

We come back to our previous conclusion as to how this sound and fury plays out...

To be sure all of the above ac is circumstantial and while we have no independent insight into any of the above, we are confident that now that the trail has grown "warm", the FBI - which yesterday said that Russia is a prime suspect - will use this as a foundation upon which to build a case blaming the Kremlin for interfering in US politics... will there be more YouTube video proof?

Which then begs the question: just like in the case of Snowden whose "treasonous" act has made him into a cult hero for a great part of the US population due to his pursuit of government accountability, would a Russian hack - if confirmed - be seen as a hostile act, or - when considering the dramatic revelations - one of much needed transparency into corrupt US political practices

And even if the FBI does find Putin as the gulty party, just how will the US respond? Will this be the first case of "cyberespionage" that escalates to some more conventional form of militaristic retaliation