No doubt about it, this is a “co-incidence”


Nice and then Munich:

to Israeli politician at scene 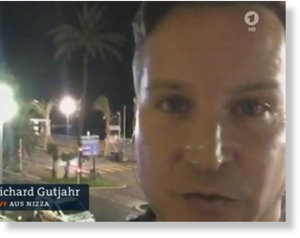 An independent German journalist filmed the Nice attack on July 14th. Last night he happened to be in Munich, right outside the mall where the shooting, that left 9 dead and 27 injured, occurred.

It was a tragic coincidence. Richard Gutjahr was in Nice on July 14th and on the 22nd happened to be in Munich at the scene of another terror attack. It was the Bavarian independent journalist who filmed, from the balcony of his hotel, the now infamous video of the truck mounting the promenade des anglais.

Speaking to German newspaper Der Spiegel, Gutjahr said he spent "a long weekend" in Nice and wanted to "experience for the first time" the July 14th festivities in France.

Eight days later, on Friday night, he was in Munich, his place of residence. But bizarrely, on that evening, he found himself outside the very same shopping mall where another 'mass terror attack' was unfolding before his eyes.

On his Twitter account, which is followed by nearly 90,000 people, Gutjahr posted pictures of the police action after the Munich shooting spree. "I'm at the mall," he tweeted according to the German daily Die Welt, along with photographs of security forces preparing to storm the building.

Gutjahr's tweets caused something of a storm on the internet, with users accusing him of potentially publishing information that could help the shooter, according to German daily Tagesspiegel. In response, Gutjahr stated that the photos were taken "30 minutes before their publication", but later erased them on the advice of the German police, and apologized.

Gutjahr is married to Israeli politician Einat Wilf. An Israeli native, Wilf attended Harvard University, receiving a BA in government and fine arts, before earning an MBA from INSEAD in France, and subsequently a PhD in political science at Wolfson College, University of Cambridge.

She completed her military service as an Intelligence Officer in Unit 8200 with the rank of Lieutenant. She describes herself as a Zionist and an atheist.