by Chris Hedges, for Truthdig 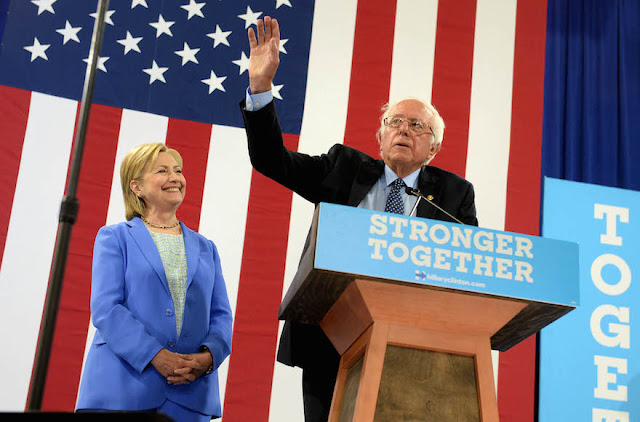 The parade of useful idiots, the bankrupt liberal class that long ago sold its soul to corporate power, is now led by Sen. Bernie Sanders. His final capitulation, symbolized by his pathetic motion to suspend the roll call, giving Hillary Clinton the Democratic nomination by acclamation, is an abject betrayal of millions of his supporters and his call for a political revolution.

Sanders squandered his most important historical moment. He had a chance, one chance, to take the energy, anger and momentum, walk out the doors of the Wells Fargo Center and into the streets to help build a third-party movement. His call to his delegates to face “reality” and support Clinton was an insulting repudiation of the reality his supporters, mostly young men and young women, had overcome by lifting him from an obscure candidate polling at 12 percent into a serious contender for the nomination. Sanders not only sold out his base, he mocked it.

Sanders, like all of the self-identified liberals who are whoring themselves out for the Democrats, will use fear as the primary reason to remain enslaved by the neoliberal assault. And, in return, the corporate state will allow him and the other useful idiots among the 1 percent to have their careers and construct pathetic monuments to themselves.

This is not speculation. We know this because there has been total continuity on every issue, from trade agreements to war to mass deportations, between the Bush administration and the administration of Barack Obama. The problem is not Donald Trump. The problem is capitalism. And this is the beast we are called to fight and slay. Until that is done, nothing of substance will change.

To reduce the political debate, as Sanders and others are doing, to political personalities is political infantilism.  We have undergone a corporate coup.  Donald Trump and Hillary Clinton will not reverse this coup.  They, like Barack Obama, know where the centers of power lie.  They serve these centers of power.

You can read the full article here.