Alexander Dugin on the end of American hegemony

I cannot,of course, agree with the triumphalism. We are so close to the end of everything.

AMERICAN HEGEMONY - THE DRAGON IS WOUNDED


Katehon,
24 July, 2016
We have said so much about Trump that the Democrats and demonic neoconservatives from The National Interest have even tried to use my positive comments about him and Moscow’s general sympathy towards this candidate in order to discredit him. They just haven’t been able to kick Trump out since he has been the obvious leader of the race. 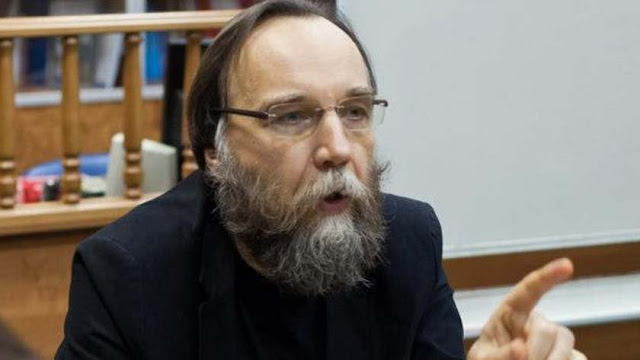 Oh, what kind of remnants of democracy there are in the US! But now I would like to speak not so much about Trump, whom we will return to later, but the US as a whole.
What is the US doing today and what is its place in the modern world? This is not an idle question. We can see that the Americans and their global networks are still making themselves felt and continuing to interfere in the internal affairs of their allies, neutral countries, and even in their enemies’ countries.
Literally just a few days ago, they tried to carry out a military coup in Turkey and provoke unrest in Armenia and Kazakhstan. However, it is becoming increasingly evident that they are much weaker than before. Washington tried to prevent Brexit, but failed. The Gulenist mutiny in Turkey also ended in failure. So, can we unequivocally state that the unipolar world has finished and that we live in a new, post-American world?
I think that such optimism would be premature. Washington cannot be written off yet.
The end of the American world is a process extended over time. And it will undoubtedly drag on. It is difficult to say for how long, and the collapse of unipolar hegemony is a very dangerous period. I would call what is happening with America now a “wounded dragon.” This metaphor explains a lot, almost everything.
Following the liquidation of the USSR and the Eastern camp, a unipolar model appeared in the world under which the American dragon reached the peak of its power. Networks of American agents of influence, most often in the form of liberal ideology, but also in more hidden forms mimicking local political and ideological trends, permeated society in practically all countries. The dragon infiltrated political elites, big business, education, the media, and sometimes security circles in European and Asian states.
In Russia, pro-American forces almost openly dominated in the 1990’s, and only in the 2000’s did Putin begin to push aside their authority little by little. These networks spread into Islamic countries where their military wing became radical Islam, a true servant of the American dragon.
But the dragon received a blow, or a series of blows, most likely fatal, at the height of its power. All of the countries which didn’t bow before American hegemony in the 1990’s and did not completely accept the unipolar model of the world as irreversible gradually came to form an informal club and began the process of resisting the dragon. China very carefully played with this line in trying to ride the tiger and carry out modernization and liberalization while preserving and even strengthening national sovereignty.
At the beginning of the 2000’s, Russia began to follow this path. Iran occupied a similar position. Contemplative India tried to escape direct American diktat. Opposition began to form among the dragon’s followers in the EU, Turkey, and even among pro-American Salafi extremists. The most important is that the Americans, having obtained the historic chance to rule the entire world, simply couldn’t handle this task. Perhaps they did not have enough historical, imperial experience, intelligence, or resources. Hegemony overheated. The dragon was then wounded.
Today, we are dealing with a globally wounded monster. The United States is still strong and its networks are still effective. Liberals, Islamic extremists, Atlanticists, and hidden agents of influence are still strong in different societies. But the peak of American dominance is behind us.
The fact that the dragon is wounded became clear already in the early 2000’s when America ceased to impose even a semblance of order and aimed only for controlled, bloody chaos. Color revolutions, putsches, coups, and Western troops’ invasions of the Middle East and post-Soviet space are evidence of this.
The essence of this is that the dragon is wounded. It is still strong and has the appearance of a power that knows its purpose. But in reality, he has gone mad from the pain of his collapsing rule. Hence why the US begins to behave so inappropriately in many cases.
It strikes at its own servants, ruins what could be preserved, and painfully and disproportionally reacts to small attacks.
This is extremely dangerous. The wounded dragon is equipped with nuclear weapons and all of its great power can still send all of humanity into the abyss with one blow.

This brief lecture is an introduction to the Fourth Political Theory, which comes to replace three classic ideologies from the Modern era, i.e. liberalism, communism, and fascism. Philosopher Aleksandr Dugin reviews the history of these ideologies and their decline, outlines the challenges of living in globalist Postmodernity, and proposes the establishment of a new political theory, ranging from the need for multipolarity and the dialogue of civilizations to Heideggerian Dasein as the new historical subject. The English-language book version of the Fourth Political Theory was published by Arktos Media in 2012.