I'm not sure I can take this entirely seriously, but something to contemplate on a Sunday evening. 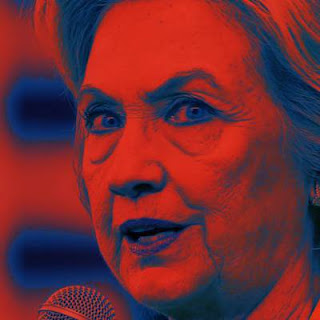 Hillary Clinton has historically high "negatives" for any US politician.

According to a recent Wall Street Journal poll, 55% of American view her negatively.  This number goes up to a nosebleed 72% with white males. Only 17% have a favorable view of her.
The WSJ is owned by Rupert Murdoch, who makes no secret of his sympathy for Clinton, and his hatred of Donald Trump, so these numbers might well be worse than the WSJ admits.
Reactions run the gamut, with some saying "there's just something about her I don't like" to "she gives me the heebie-jeebies!"
A screenshot from a recent viral video (see below) where Clinton acts, umm, demonically, scaring a reporter

Lately, some people have suggested demonic possession.  Franklin Graham, an influential Evangelical leader, and the son of the late Billy Graham, spoke about this in June:


“It is evident that Hillary has a demonic spirit inside her,” said Graham in an interview on WEHW. “She likes to wear red, which is a demonic color. She is also not a subservient woman, because she has pursued a career outside the home and sees herself as equal to a man. That is a rebellious, Jezebel spirit.”

Or this older one of her celebrating the death of deposed president of Libya, Muammar Gaddafi.

The existence of demons is an article of faith in the Russian Church, and demonic possession a common topic of discussion.  Exorcisms are a normal occurrence.  Russia Insider spoke to a leading exorcist in the Russian Orthodox Church, asking him to evaluate several Hillary videos. He agreed to do so on the condition of annonymity, because giving his name would require getting permission from church authorities, an unlikely prospect.
The exorcist is a well-known Russian monk at a major Russian monastery who has performed hundreds of exorcisms.  According to him, Hillary's manic energy had "clear signs" of demonic possession.  He also pointed to the results of her government service, citing the Bible, "By their fruits you shall know them".   "From the bombing of Yugoslavia to the killing in Libya, Syria, and Ukraine, Clinton seems to reflexively support policies that lead to needless death and suffering.  This is also a sign."
As an example of how widely accepted exorcism is in Russia, here is a news segment about the phenomenon from the mid 2000s on a leading Russian news show, "Post Scriptum".  The host is Alexey Pushkov, a respected journalist, who since has become an influential politician, currently heading the important foreign affairs committee of the Russian parliament (Duma).  (Wikipedia)


And here is an exorcism being performed in Russia:

Type "Russian exorcism" into Youtube, and you will see dozens of examples.
The reactions on Youtube to the recent viral video seem to suggest that a lot of people agree