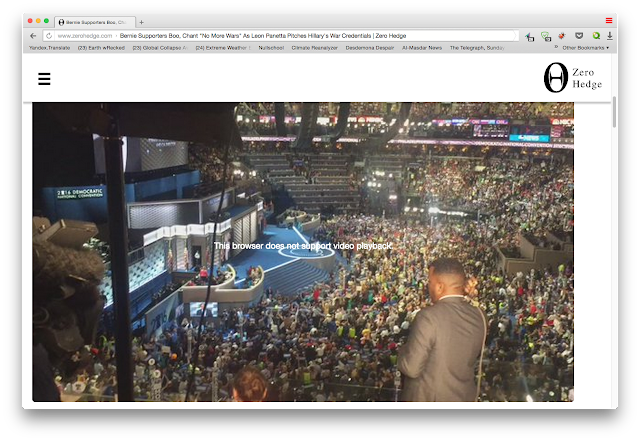 Former Secretary of Defense Leon Panetta reinforced Hillary Clinton's position as a warmonger in his speech at the Democratic National Convention tonight. Amid various jabs at Donald Trump, Panetta exclaimed the danger of "withdrawal" of American forces from the world and the apparent need for more status quo interventionism; but the 'reportedly' united Democratic convention seemed not to agree. Bernie Sanders' supporters drowned out Panetta's claims that Hillary masterminded Bin Laden's killing with boos and chants of "no more war," and "lies."

Having already slammed Donald Trump with regard Russia,


“I just think that’s beyond the pale,” he said to CNN’s Christiane Amanpour. "I think that kind of statement reflects that he is truly not qualified to be president of the United States.”

The former CIA Head then proclaimed falsely that,

"Trump..is asking one of our adversaries to engage in hacking or intelligence efforts against the US to affect our election."

But it was his reinforcement of Hillary Clinton's war credentials that appeared to upset the clearly-divided Democratic party the most, as Bernie supporters drowned him out for a few moments with chants of "no more wars" and "lies" amid their booing.

This president is Hillary Clinton. During my time as CIA Director and Secretary of Defense, Hillary was a strong supporter of our efforts to protect our homeland, decimate al-Qaeda, and bring Osama bin Laden to justice. It was a tough decision to go after bin Laden. In long meetings in the White House Situation Room, we debated that fateful decision.

I presented the intelligence to the President, laying out the risks. And when the President went around the table to the country's national security leadership, Hillary was clear: We have to go get bin Laden. And our Special Operations Forces did just that. And they sent a clear message to the world that no one attacks America and gets away with it.

Hillary is just as determined to defeat those who threaten us today: ISIS, al-Qaeda, Boko Haram, al-Shabaab. Terrorists who pervert the teachings of Islam to kill innocent people going about their daily lives, people traveling through airports in Brussels and Istanbul, families celebrating on the beachfront in France, men and women shopping in a market in Baghdad, and just this week, an 85-year-old priest whose throat was slit by terrorists who stormed his church during Mass. These murderers must be stopped.

Hillary Clinton is the only candidate who has laid out a comprehensive plan to defeat and destroy ISIS and keep America safe. She is smart. She is principled. She is tough and she is ready. Hillary is the single most experienced and prepared person who has ever run for president.

We cannot afford someone who believes America should withdraw from the world, threatens our international treaties, and violates our moral principles.

As The Hill reports, Panetta appeared very flustered as he stood on stage waiting for the chants to end.


As Panetta continued to speak, the lights were dimmed over the sections of Sanders supporters, an apparent effort to silence them.

But the protesters were undeterred and lit up cell phone flashlights in protest.

The chants undercut a portion of the convention dedicated to promoting Clinton's national security bonafides.

Retired Rear Adm. John Hutson's speech was also cut off by chants from the California delegation. But the chants appeared unrelated to his speech, which praised the former secretary of State's readiness to be president and attacked Trump as reckless on foreign policy.

We have one word: Unity?

Posted by seemorerocks at 14:02