Zero Hedge seems convinced that the Russians were responsible for the leak of DNC emails but point out that it is the content, not who was responsible, that is important.

Assange: "A Lot More Material" Will Be Released 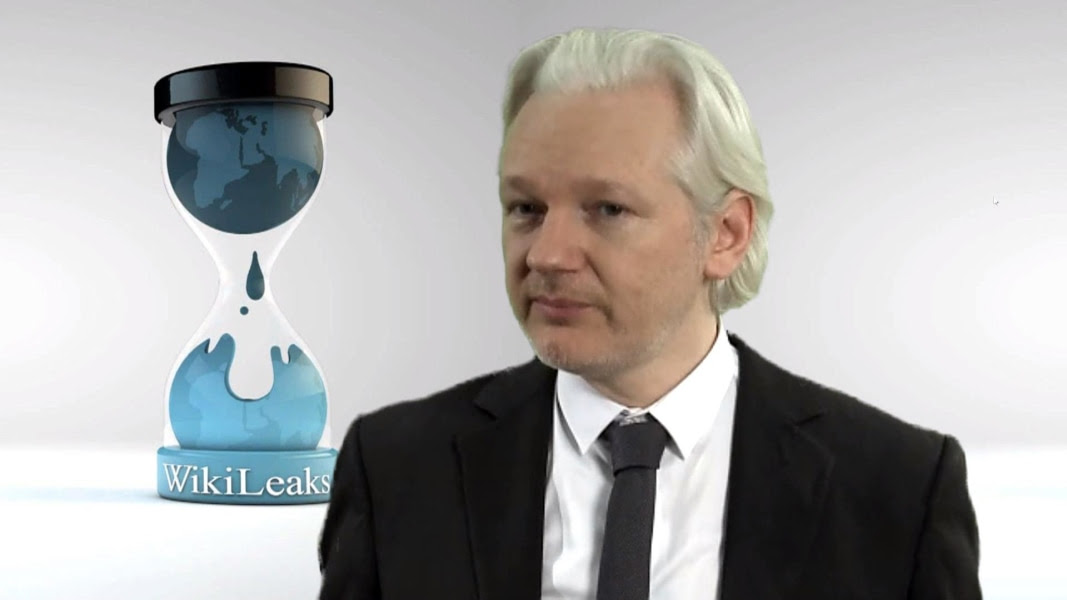 
One month ago, when Wikileaks' Julian Assange told ITV's Richard Peston that he would publish "enough evidence" to indict Hillary Clinton, few took him seriously. And while Hillary has not been indicted - yet - last Friday's leak has already managed to wreak havoc and has led to revelations of cronyism and collusion within the Democratic party and the media, the resignation of the DNC Chair Debbie Wasserman Schultz, as well as chaos on the first day of the Democratic convention.

Hence, why we believe Assange will be taken more seriously this time.
Earlier today, Assange told CNN that Wikileaks might release "a lot more material" relevant to the US electoral campaign. Assange spoke to CNNfollowing the release of nearly 20,000 hacked Democratic National Committee emails.

The topic then turned to the topic du jour: "did Putin do it"?

Assange refused to confirm or deny a Russian origin for the mass email leak, saying Wikileaks tries to create ambiguity to protect all its sources.
"Perhaps one day the source or sources will step forward and that might be an interesting moment some people may have egg on their faces. But to exclude certain actors is to make it easier to find out who our sources are," Assange told CNN.
The Kremlin has rejected allegations its behind the hacking, calling suggestions it ordered the release of the emails to influence US politics the "usual fun and games" of the US election campaigns, while the Russian foreign minister had an even simpler reaction to the same question: "I don't want to use four-letter words." Dmitry Peskov, the Kremlin spokesman, added, "This is not really good for bilateral relations."

All of this now appears to be irrelevant, and as we speculated earlier, the "anti-Russia" narrative is now in motion and moments ago Obama said that it's 'possible' Putin is trying to sway vote for Trump.

Which brings us to the next point: speaking from the Ecuadorian embassy in London, where he faces extradition over sexual assault allegations, Assange told CNN that Democratic Party officials were using the specter of Russian involvement to distract from the content of the emails, which have had tumultuous affect on the party at the start of its national convention, where it is expected to make Hillary Clinton its presidential nominee.

"It raises questions about the natural instincts of Clinton that when confronted with a serious domestic political scandal, she tries to blame the Russians, blame the Chinese, et cetera," Assange told CNN.

"Because if she does that while in government, it could lead to problems," he added.
Actually Julian, she already has done that, most recently when the Inspector General accused her of violating State Department rules for maintaining a personal email server: her response - blame the state department for having an "anti-Clinton" bias, and use the oldest, or rather youngest, defense in the book, one used by young children everywhere: "others did it" (something which we subsequently learned was incorrect).

Then again, when the entire objective press is engaged in a full court press to crush the messenger (or the source), and ignore the message, none of this matters.
Assange's full interview is below.

Why Hillary Is Nervous: "More Leaks May Be Coming"

Over the weekend, Wikileaks posted a treasure trove of emails from various members of the Democrat party which has laid ruin to any hope for civility at the DNC's convention in Philadelphia.  That said, Hillary's campaign seems to be even more concerned about what may be leaked next.

“The WikiLeaks leak was obviously designed to hurt our convention, I don’t think they’re done. That’s how they operate.  We can’t know, but it’s part of the reason that we wanted people to understand our belief that the Russians are behind this.  People need to understand — when these leaks happen — what they’re designed to do.”

Palmieri added that the Clinton campaign was not worried about it's own email security
...which we're sure the American people will find very reassuring in the wake of that pesky little FBI investigation in which we learned just how secure Hillary's email account was.

Palmieri’s comments come as Democrats prepare to officially nominate Clinton for president, making her the first woman to be nominated for president by one of the two major political parties.

Judging by yesterday's intraparty strife, one can only imagine how raucous today's roll-call will be.

Call us crazy, but the campaign seems to be spending way too much time spinning a narrative about Russian involvement, even going so far as to call on Hillary's friends at the FBI to look into the issue, for this scandal to fade quietly into the night.

Something tells us that Jennifer knows more than she's letting on and that we'll get to review some more leaked emails soon.
Alternatively, we're sure Bill could arrange for a purely coincidental meeting with Putin on a tarmac somewhere to discuss his "grandchildren" but something tells us his audience might not be as "accommodating" as last time he tried that.


Maybe Putin Did It After All: Trail Emerges Linking DNC Email Hack To Russia


So far we have taken the widely propagated "scapegoat" theory that the DNC email hack came from Russia as an amusing sideshow meant to distract from the real question at hand: after all, with Debbie Wasserman Schultz's resignation, she confirmed that it is not who released the emails that was critical, but what was in them.

And yet, now that the damage has been done, the question emerges: was Putin behind it after all? After all, we proposed this very possibility in early May in "
You Know Those Missing Hillary Emails? Russia Might Leak 20,000 Of Them" and then again in mid-June in "
Russia Is Reportedly Set To Release Clinton's Intercepted Emails" even though the alleged hacker - and the person who admittedly originally leaked the Wikileaks email trove- was the self-identified Romanian hacker Guccifer 2.0.

To be sure, as we reported this morning, when asked if Russia was behind the hack, Russian's foreign minister Sergey Lavrov had a simple response: "Idon't want to use four letter words."

And yet, this afternoon, an analysis has emerged that suggests the Kremlin may indeed have had a role to play in the resignation of the DNC chairwoman, and the hectic, at time chaotic first day of the Democratic National Convenation.

As The Hill writes, emails sent by Guccifer 2.0 to The Hill show evidence that the hacker used Russian-language anonymity software — a language he has claimed he could not read or even recognize. The news comes amid mounting reports linking Guccifer 2.0’s hack of Democratic National Committee (DNC) emails to Russian intelligence.

Guccifer 2.0 communicates with journalists using different disposable web-based email accounts each time. With The Hill, he communicated using addresses from ProtonMail and Mail.com.

To further protect his anonymity, he connected to the webmail accounts using a Virtual Private Network (VPN). Users send VPN servers the address of a site they would like to reach, and the VPN accesses it in their stead – masking the users' internet addresses.

Metadata of emails sent from Guccifer 2.0 to The Hill was shared with the cybersecurity firm ThreatConnect. In the interest of protecting Guccifer 2.0’s identity, his account information was not included.

The Mail.com metadata includes the internet address of who is mailing outgoing messages — in Guccifer 2.0’s case, the VPN.
Vocativ reported Tuesday that ThreatConnect had discovered the hacker used a predominantly-Russian-language VPN when he corresponded with them through a French AOL account. ThreatConnect matched that same internet address from the same VPN to the Mail.com email.
VPNs often let users route their traffic through a variety of servers in a variety of countries. Guccifer 2.0 routed his traffic through a French internet address operated by the Elite VPN service.

But that French internet address was not available for public use – it was not one of the French servers Elite VPN allowed its clients to select. Instead, the French server appears to have only been used by a select, criminal clientele in the past, including text message scammers.

Guccifer 2.0 has long claimed to be Romanian. In an online chat interview with Motherboard, Guccifer 2.0 claimed not to know how to speak Russian. In it, Motherboard asked a question in Russian, and Guccifer replied "What's this? Is it russian?"

The site then asked if he understood Russian.

In the same interview, when forced to answered questions in Romanian, he used such clunky grammar and terminology that experts believed he was using an online translator.

The two active payment services for Elite VPN are options that are popular in Russia, including the Moscow-based Web Money. The site also includes a link to a long-defunct Costa Rican payment processor that was seized by law enforcement in 2013.

There are other anonymity services besides VPNs — including Tor — and a large international community of other VPNs both better known and better esteemed than Elite VPN. But the Edward Snowden documents and recent investigations by U.S. law enforcement show a U.S. interest in cracking through the anonymity of these so-called proxy servers.

“They might be making sure they are leveraging proxy infrastructure within their own borders,” said Rich Barger, ThreatConnect director of threat intelligence.

The fact that Guccifer 2.0’s VPN is Russian is not the first indicator that Russia was involved in the attack on the DNC. The email hack leveraged the same tools, methods and command servers seen in other attacks linked to Russian intelligence, including on the German Parliament.

“The noose is tightening around Russia,” said Barger.

Guccifer 2.0 leaked a number of documents to the press, including convention strategies, donor information and opposition research. The first few packages of files were released to the public directly; the last two were first sent to The Hill. Guccifer has also claimed responsibility for leaking emails to WikiLeaks, something WikiLeaks refuses to confirm or deny.

* * *
To be sure all of the above is circumstantial and while we have no independent insight into any of the above, we are confident that now that the trail has grown "warm", the FBI - which yesterday said that Russia is a prime suspect - will use this as a foundation upon which to build a case blaming the Kremlin for interfering in US politics.

Which then begs the question: just like in the case of Snowden whose "treasonous" act has made him into a cult hero for a great part of the US population due to his pursuit of government accountability, would a Russian hack - if confirmed - be seen as a hostile act, or - when considering the dramatic revelations - one of much needed transparency into corrupt US political practices.

And even if the FBI does find Putin as the gulty party, just how will the US respond? Will this be the first case of "cyberespionage" that escalates to some more conventional form of militaristic retaliation?

We are confident the wheels are already in motion, and the answer will be provided shortly.