The American Establishment is getting desperate. 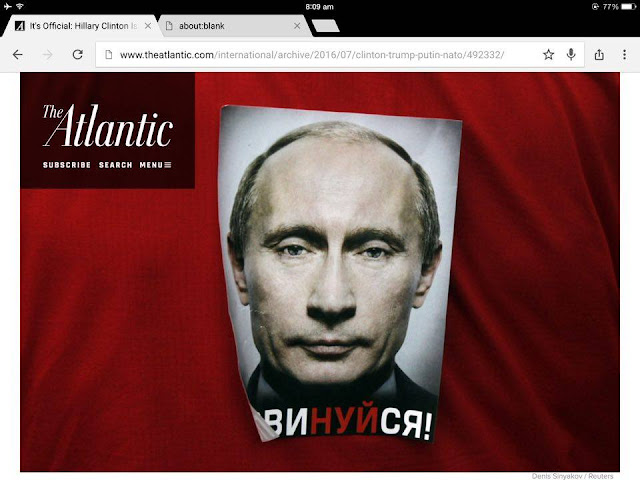 It's Official: Hillary Clinton Is Running Against Vladimir Putin

Fulfilling what might be the Russian autocrat’s dearest wish, Trump has openly questioned whether the U.S. should keep its commitments to NATO.

The Republican nominee for president, Donald J. Trump, has chosen this week to unmask himself as a de facto agent of Russian President Vladimir Putin, a KGB-trained dictator who seeks to rebuild the Soviet empire by undermining the free nations of Europe, marginalizing NATO, and ending America’s reign as the world’s sole superpower.


I am not suggesting that Donald Trump is employed by Putin—though his campaign manager, Paul Manafort,was for many years on the payroll of the Putin-backed former president of Ukraine, Viktor Yanukovych. I am arguing that Trump’s understanding of America’s role in the world aligns with Russia’s geostrategic interests; that his critique of American democracy is in accord with the Kremlin’s critique of American democracy; and that he shares numerous ideological and dispositional proclivities with Putin—for one thing, an obsession with the sort of “strength” often associated with dictators. Trump is making it clear that, as president, he would allow Russia to advance its hegemonic interests across Europe and the Middle East. His election would immediately trigger a wave of global instability—much worse than anything we are seeing today—because America’s allies understand that Trump would likely dismantle the post-World War II U.S.-created international order. Many of these countries, feeling abandoned, would likely pursue nuclear weapons programs on their own, leading to a nightmare of proliferation. 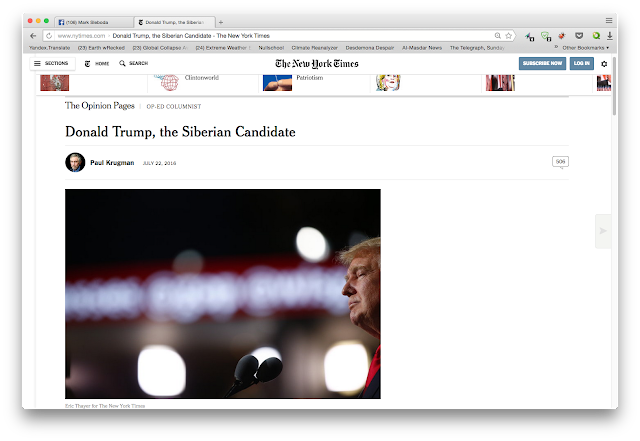 If elected, would Donald Trump be Vladimir Putin’s man in the White House? This should be a ludicrous, outrageous question. After all, he must be a patriot — he even wears hats promising to make America great again.

But we’re talking about a ludicrous, outrageous candidate. And the Trump campaign’s recent behavior has quite a few foreign policy experts wondering just what kind of hold Mr. Putin has over the Republican nominee, and whether that influence will continue if he wins.

I’m not talking about merely admiring Mr. Putin’s performance — being impressed by the de facto dictator’s “strength,” and wanting to emulate his actions. I am, instead, talking about indications that Mr. Trump would, in office, actually follow a pro-Putin foreign policy, at the expense of America’s allies and her own self-interest.