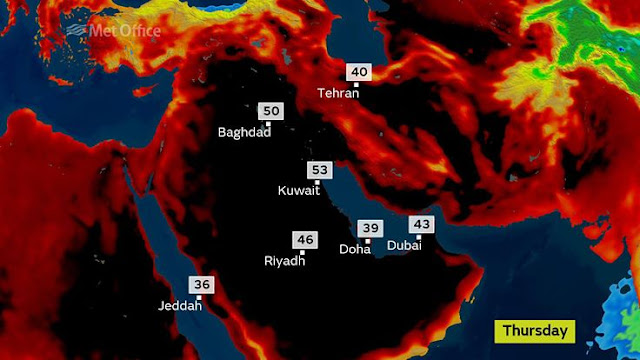 It was a historic day in the annals of meteorology on Thursday, July 21, 2016 in the Middle East, where the temperature in Mitribah, Kuwait soared to an astonishing 54°C (129.2°F).

If verified, this would be Earth's hottest temperature ever reliably measured outside of Death Valley, California, according to wunderground's weather historian Christopher C. Burt. The temperature is likely to be verified, since Thursday's incredible heat also extended into Iraq, which set their all-time heat record: 128°F (53.4°C) at Basrah.

According to Burt and Herrera, Thursday's Basrah reading ranks as the fourth highest temperature ever reliably measured outside of Death Valley; the only higher non-Death Valley temperatures were today's 54°C (129.2°F) at Mitribah, Kuwait, a 53.6°C reading at Sulaibya, Kuwait in 2011, and a 53.5°C reading at Mohenjodaro, Pakistan on May 26, 2010.

Note that there is one other competitor for hottest non-Death Valley temperature ever measured: the official all-time high temperature in Israel is a 54°C (129.2°F) reading from Tirat Tsvi, Israel on June 22, 1942. The Israeli Met Office pursued an investigation of the record in 2012, prompted by an inquiry from the World Meteorological Organization (WMO) and convincing evidence from wunderground's weather historian Christopher C. Burt and weather extremes expert Howard Rainford that the actual high temperature was a full degree lower.

The Israeli Met Office concluded that the record was valid, but refused to make public the details leading to their conclusions. Until they do so, the record remains suspect. 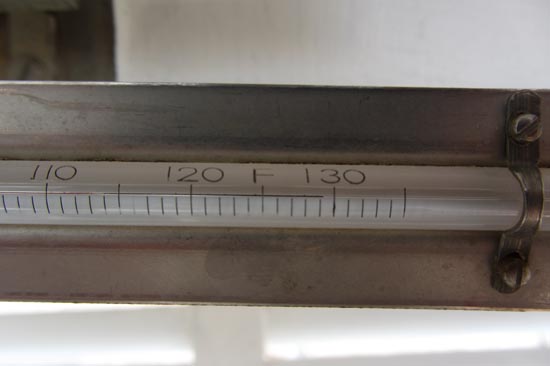 Figure 1. A photograph of the official Furnace Creek, Death Valley maximum recording thermometer at time of observation on Monday morning July 1, 2013 (which was for the maximum temperature measured on June 30). The photo shows a maximum of 129.2°F was reached, tying it with the 129.2°F reading at Mitribah, Kuwait, on July 21, 2016, for the highest reliably measured temperature on Earth, according to wunderground's weather historian Christopher C. Burt. Observations at the site are made only at 4 p.m. and 7 a.m. daily. The shelter door is not opened at any other time in order to not affect the ambient air temperature inside the shelter. You may have seen a different image of this same thermometer on the NWS-Las Vegas web site posted July 1, 2013 that shows the temperature just shy of 129°. That is because THAT photograph was taken after the thermometer had been removed from its shelter and turned vertically, which caused the mercury to slip down the tube about 0.3°F. This photograph was taken prior to the thermometer being removed from the shelter. Photo courtesy of Death Valley National Park and NWS-Las Vegas.

Mr. Burt plans to post an in-depth look at the new heat records in a forthcoming post.

I'll have an update on the tropics on Friday afternoon.

Jeff Masters
Posted by seemorerocks at 12:37