Did Russian Spetnaz save Erdogan?

Did Russian Special Forces save 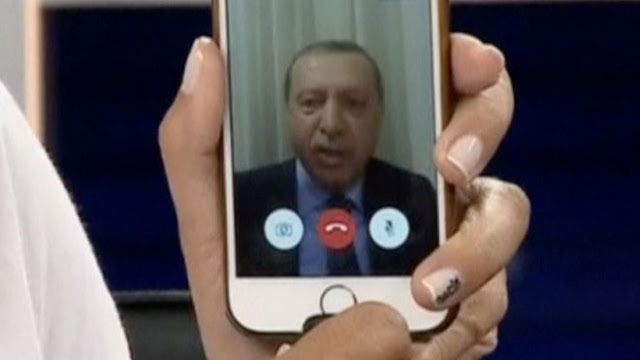 Fort Russ,
22 July, 2016
The pro-American coup attempt led by Gulen in Turkey last Friday shocked Turkey. But when exactly did the threat of a coup become known and who had such information?
As analysts have reconstructed the events, the Turkish intelligence service MIT could have learned of the coup threat and reported it to the General Staff only several hours before it actually began. According to the MIT report, the coup took place at 16:00 on July 15th. The information from MIT officially reached General Staff Chief Hulusi Akar, land forces commander Salih Cholak and General Yashar Guler, who were all later arrested by the rebels, but the General Staff did manage to get out in time the orders banning military aircraft and helicopter flights over Turkey.
At the same time, President Erdogan stated that he received the news of rebellion only after it had begun and was able to leave his hotel a mere 10-15 minutes before the putschists’ special forces arrived in helicopters. He stated: “On the 15th, I was in Marmaris, where we had five days of vacation. At around 10 P.M., I was told about what was happening. They decided to take me away from the hotel. An operation against me was carried out in Marmaris and two of my guards were killed. If I had stayed an additional 10-15 minutes, I would have been killed or captured.”
The question immediately arises: if the security services and General Staff had known about the coup being prepared, then why was Erdogan not warned until 6 hours later? This was quiet sabotage which means that the leadership of the security services and General Staff also contained conspirators, and that the arrest of generals could have been a diversion. Or did Erdogan receive the information, know everything, and decide to provoke the conspirators into open rebellion in order to nip the coup in the bud?
There is yet another detail: two of Erdogan’s military advisors were arrested following the putsch. It is unknown, of course, what exactly their role was, but it cannot be excluded that the information from the army and security services had gone through them and that it was them who delayed such an alarming message.
In response to these inconsistencies, yet another, rather interesting theory has appeared in the press which says that the President of Turkey thanked the Russian Federation for saving his life. As the authors of this theory have conveyed, Russia’s intelligence structures found out about the US’ conspiratorial plan to overthrow Erdogan as early as 9 months ago.
The plan was to shoot down his plane and then, with the help of the CIA, replace Erdogan with Fethullah Gulen, using ISIS terrorists as the main active force. But seeing as how the President of Turkey had already apologized for the downing of the Su-24 bomber two weeks ago (which was admittedly quite unexpected), then the Ministry of Defense of Russia could have then found it possible to launch an operation to protect the Turksh leader “with the help of the elite 26th special forces regiment of the Russian Defense Ministry’s GRU.”
According to this theory, it was Russian Spetsnaz who successfully evacuated Erdogan to the Case De Maris Hotel shortly before the assault on the Grand Yazici Club Turban where he was previously located and where 8-10 militant groups managed by the CIA violently broke in only to find an empty room.
It is difficult to say how much truth there is in this version, but there is the fact that President Erdogan’s first appeal to the people to take to the streets against the rebellion was relayed through social networks while he was still in some kind of “unofficial” shelter with lace curtains on the windows. And then suddenly the center of the country’s governance was taken back into is hands while covered on a flight by Russian air forces to Ankara, allege such sources. Why the rebel pilots of the Turkish Air Force failed to shoot down the president’s Gulfstream IV with TC-ATA registration, if they indeed already had it in their sights, is also up for speculation.
“Of course, it cannot bet said that Erdogan was saved by our guys, Russians,” Yuri Pershikov, an information analyst specializing in Turkish affairs commented on these reports. “Reports have appeared that some of our electronic warfare systems deployed in Russia and Syria blocked the navigation equipment on [Turkish] air force bases. Information has also appeared that Erdogan’s plane was caught by two Turkish aircraft but they were, for some reason, unable to shoot. Afterwards, reports appeared that our air forces and satellites were involved. For sure, we will hardly find out whether this is true or not, but we can assume that they could have suppressed the guidance systems of these planes. Russia has the technological capabilities to have helped and supported Erdogan.”