The Democrats' calls for war and corruption and fraud at home

Firstly,the Democrats' headlong move to war with Russia and China.

Hillary to Deliver Syria to Jihadists? 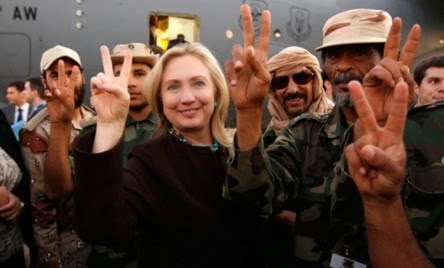 
According to Hillary Clinton's foreign policy advisor, Jeremy Bash, if Clinton is elected she will order a "re-set" of US policy toward Syria to emphasize the "murderous" nature of the Assad regime. As the Telegraph reports, Hillary Clinton will breathe new life into the "Assad must go" camp. She will likely launch a full-scale US invasion of Syria.

A Clinton administration will not shrink from making clear to the world exactly what the Assad regime is. It is a murderous regime that violates human rights; that has violated international law; used chemical weapons against his own people; has killed hundreds of thousands of people, including tens of thousands of children.

Of course claims that Assad used chemical weapons on his own people is the long since disproven neocon cri de guerre to push Obama into an attack on the Syrian government. The 2013 gas attack near Ghouta was likely a provocation by the rebels hoping to draw the US directly into their fight.


This "he gassed his own people" line is the Syrian version of Saddam's "WMDs," a lie repeated ad infinitum to make the case for war.


Clinton's advisor informs us that as president his boss would involve the US in everyone else's affairs: "Mrs Clinton believes that problems around the world can more easily be solved when America is involved and in each of those problems or crisis," he told the Telegraph


If Hillary becomes president and gets her way with a Syria "re-set" the prime beneficiary will be radical Islamists. There literally is no secular, moderate opposition to the Assad government.


How do we know the jihadists will come out on top? Her last great intervention, the "liberation" of Libya should be precedent. Gaddafi was no angel, but until shortly before he was overthrown he was a Washington ally, a secular counterpart to creeping Islamization of the region. After the 2011 "liberation" strongly backed by Hillary, Libya has turned into a hellhole of competing radical Islamist militias and warlords. ISIS and al-Qaeda were unheard of in Libya before Hillary got her hands on it. Now it is rotten with them.


When it comes to Syria, Hillary means war.


The right target for the U.S. in Syria: Hezbollah 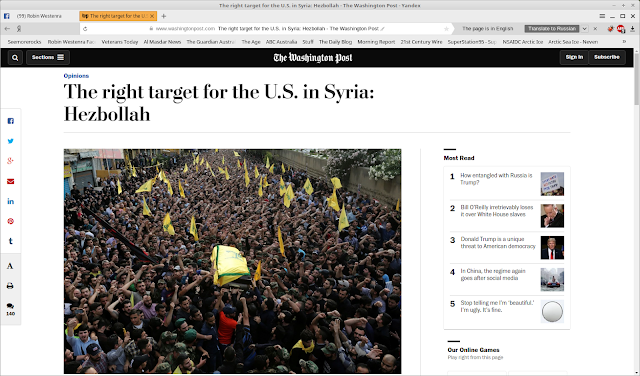 The military situation in Syria has turned against the U.S.-supported opposition over the past year, due mainly to Russian intervention. Now, the failed coup in Turkey and subsequent crackdown there stand to reduce the capabilities of a key U.S. ally. Without some rebalancing now in favor of the opposition to Syrian dictator Bashar al-Assad, the prospects for a satisfactory negotiated political transition are dim.

In a dissenting internal memo last month, 51 State Department diplomats advocated attacks on Syrian government forces to end their aggression against the country’s civilian population, alter the military balance and bring about a negotiated political solution. President Obama has focused instead on fighting terrorism in Syria, but U.S. targets are limited to Sunni extremists such as the Islamic State and al-Qaeda affiliates.

There is also a Shiite terrorist organization in Syria: Lebanon-based Hezbollah. It should not be immune.

Hezbollah was founded to resist the Israeli occupation of Lebanon in the early 1980s and takes credit for the eventual Israeli withdrawal from that country. Tightly allied with and supported by Iran, it has become the dominant political force among Shiites in Lebanon, where it not only participates in national politics but also runs its own security forces and provides social services to Shiite populations.

Covertly since 2012, and overtly since 2013, Hezbollah has deployed forces inside Syria, where its thousands of fighters are aligned with Assad’s army and mainly Shiite and Alawite militias against mainly Sunni forces that Assad regards as terrorists. The Iranian Revolutionary Guard Corps pays Hezbollah’s bills and provides its command-and-control operations. Hezbollah forces have been particularly effective along the border with Lebanon, which provides it with strategic depth and supply lines.

Hezbollah is a major factor in the military balance in Syria. Along with the Russian air intervention begun last September and the Iranian Revolutionary Guard, Hezbollah’s fighters have enabled Assad to make progress against his opponents, especially those associated with the Free Syrian Army fighters backed by the United States. That progress has hardened Assad’s negotiating stance and blocked the U.N. search for a political solution. Assad is winning, and he sees no reason to accept a transition away from his rule.

A shift in the military balance is essential to ending the war, which is what Washington says it wants. But Obama has steadfastly refused to go to war against the Syrian, Iranian or Russian government. Even if he wants to, it is doubtful he has authorization from Congress to do so.

But Hezbollah is a non-state actor. It is also a U.S.-designated terrorist group that has murdered Americans, among many others. Most Republicans and Democrats would applaud an attack on Hezbollah, even if some in both parties would bemoan a move that suggested widening commitments overseas.

Hezbollah’s withdrawal or U.S. targeting of Hezbollah would send a strong but still limited message to the Syrian opposition and its allies in Turkey and the Persian Gulf: We are prepared to attack Shiite as well as Sunni terrorists, but it’s up to you to take advantage of the opportunity and come to the negotiating table ready to reach a serious political settlement. It would also send a strong but likewise limited message to Iran and Russia: We will not continue to tolerate your intervention in Syria without responding. The time for a political settlement is now.

How would the players in Syria react? Hezbollah would likely try to strike at accessible U.S. assets or citizens in neighboring countries, most likely in Lebanon or Iraq. It might also launch rockets into Israel. The Islamic State, which uses Hezbollah’s involvement in Syria as a recruiting tool, would be undermined. Russia and Iran could in theory up the ante, escalating their involvement in Syria, but in practice they both appear to be close to the limit of lives and treasure they are willing or able to expend there. Assad would be outraged and promise revenge, but the Syrian government is even more clearly at the limit of its capabilities.

Meanwhile, the non-extremist Syrian opposition would applaud and press hard against the territory where Hezbollah is deployed. Gulf states would likewise welcome the U.S. action and redouble their efforts to support the opposition. Israel knows all too well how to react to Hezbollah attacks in order to reestablish deterrence. Turkey might complain that the United States was not also acting against the U.S.-allied Kurdish fighters whom Ankara regards as terrorists, but the Turks would still benefit from any consequent military progress against Assad by non-Kurdish forces.

In short, U.S. targeting of Hezbollah would mostly please and embolden Washington’s friends and discomfit its antagonists. It would also reassert U.S. commitment to fighting terrorism of all sorts, renew Washington’s commitment to holding Hezbollah accountable, hasten an end to the Syrian civil war and make a political settlement more likely. That is not a bad balance of risks and benefits

This is chilling. It reminds me, if anything, of the 1930's nazi Nuremberg rallies.

The fraud at the DNC was open - bringing in paid people to fill the empty seats for the speeches.Meanwhile the media refuses to show the crowds at the Donald Trump rallies

Bernie Delagate Speaks Out Against Fraud at DNC *Seat Fillers*

But in the meantime resistance continues -

This is a very good report from RT and Gayane Chichikyan.

Blame game: No evidence Russia trying to influence US election

The Democratic Party is once again in hot water with Bernie Sanders supporters in an outrage over a depiction of the Jewish progressive as a rat in the sole piece of Bernie memorabilia at the DNC Convention harkening back to Nazi anti-Semitic propaganda.

"This is somebody’s sick sense of humor. It’s a cruel joke. They obviously want to make him look like some kind of ogre," said Karen Bernal, a Bernie Sanders delegate from California.


The sole piece of Bernie Sanders memorabilia for sale at the Democratic National Convention presents the insurgent progressive candidate’s face distorted to look like a rat harkening back to anti-Semitic imagery employed during the reign of Nazi Germany
Posted by seemorerocks at 20:32