Climate extremes in the United States 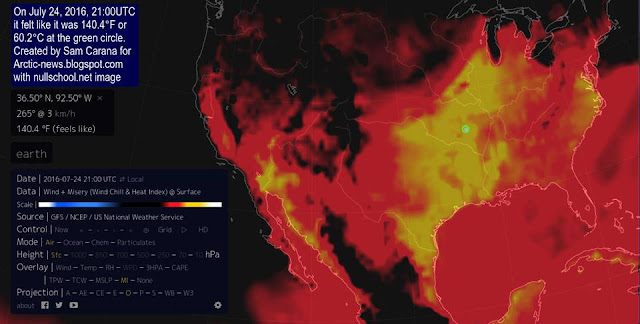 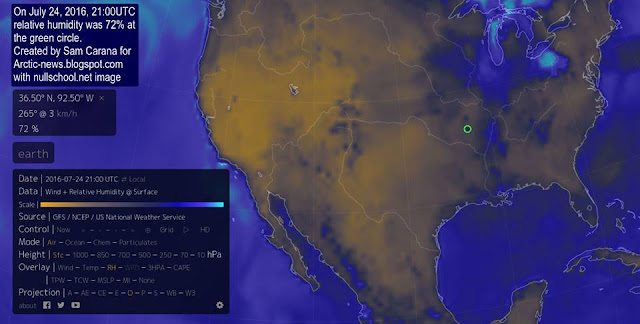 Because humidity at the time was 72%, it felt like it was 140.4°F or 60.2°C at that location on the border of Missouri and Arkansas, also indicated by the red marker on the Google Maps image. 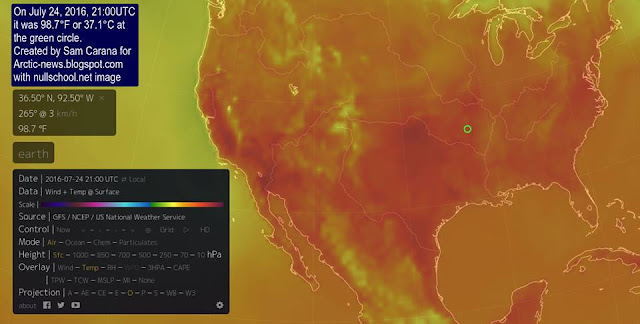 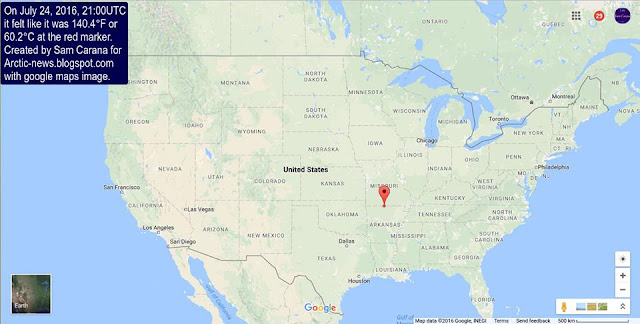 Created by Sam Carana for Arctic-news.blogspot.com with nullschool.net and Google Maps images.

Robertscribbler,
25 July, 2016
On Friday, amidst temperatures exceeding 100 degrees Fahrenheit, and at a time when California is now entering its fifth year of drought in a decade when seven out of the last ten years have been drought years, a rapidly growing and dangerous wildfire erupted in the hills north of Los Angeles.
)

The Sand Fire, which some firefighters are calling practically unprecedented, sparked before typical wildfire season peak and began a rapid spread that consumed 10,000 acres per day from Friday through early Monday. Nearly 3,000 firefighters scrambled to gain a foothold against the blaze, but were somewhat unprepared as contracted water-bomb aircraft from Canada won’t be available until next month, during what is usually the worst part of fire season. The aircraft assistance was planned as extra fire-suppression capability for Santa Clarita, but typical fire threat and risk assessments no longer hold much water in an era where human-forced climate change is pushing temperatures and drought conditions to new extremes across California.

By Monday, the fire had exploded to 33,000 acres (51 square miles). In total, 18 buildings are now reported to have burned and more than 10,000 others have been evacuated. A population the size of a small city, 20,000 people, have now been displaced by this rapidly expanding wildfire. Due to heroic efforts by firefighters, an estimated 2,000 homes have been saved so far. Sadly, the fire has also now claimed a life. 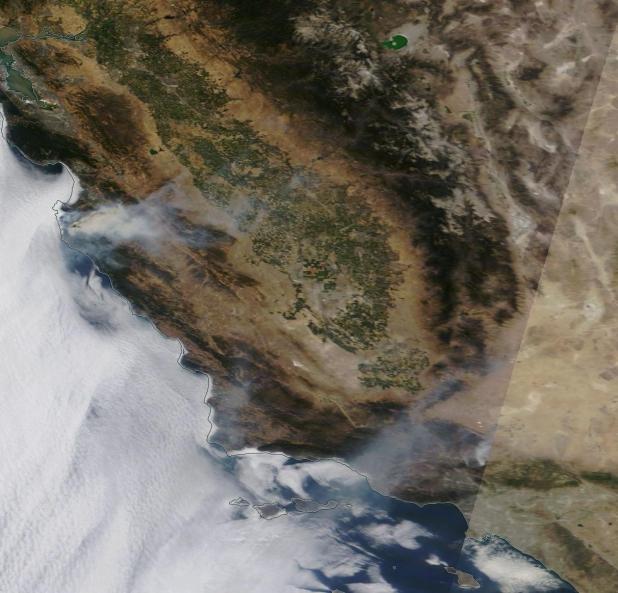 (Smoke plumes from large wildfires burning over southern and western California, framed by a warming Pacific Ocean, a drying Central Valley, and what appear to be snow-free and bone-dry Sierra Nevada Mountains in this July 24 LANCE MODIS satellite shot.)

Continued hot temperatures and 30-mile-per-hour winds are expected to continue to fan the fire today, which as of this writing is just 10 percent contained. If the worst case is realized and this fire continues to expand out of control, as many as 45,000 homes may ultimately be forced to evacuate. Such an evacuation would be comparable in scale to the Fort McMurray Fire which raged through Alberta during May and forced more than 90,000 people to flee.

Conditions in Context — Living in a Fire Age

There is widespread geological evidence of voracious fires burning through large regions of the globe during past hothouse warming events. At the Paleocene-Eocene boundary 56 million years ago, a warming rate that was about ten times slower than what we are experiencing now set off immense blazes that ripped through the world’s peatlands and forests. In other words, evidence points to past instances of Earth warming into hothouse conditions generating periods of intense fires that may well be called fire ages. Today, the Earth is about 1.2 degrees Celsius warmer than during the late 19th century. This high temperature departure combines with a very rapid rate of continued warming to dramatically increase wildfire risks around the globe. 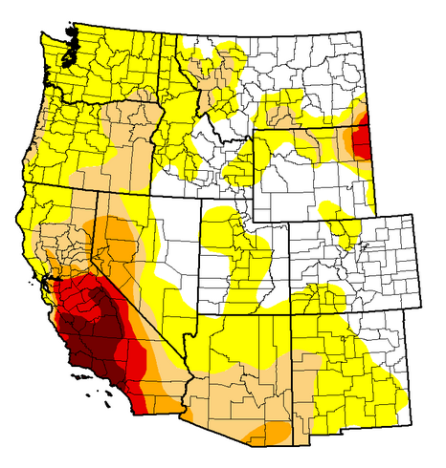 (Conditions related to climate change continue to increase drought frequency across the U.S. West. For the past five years, California has seen the brunt of this predicted increasing drought trend as a result of human-forced warming. Image source: US Drought Monitor.)

More local to the Sand Fire, California is in a zone that global climate models have long predicted would suffer from severe heat and drought as a result of fossil-fuel burning and related human-forced warming. This year’s persistent above-average temperatures on the back of five years of drought have greatly increased wildfire risk for the state. Millions of trees now stand dead, surrounded by withered vegetation in a heating and drying land — a vast range of additional fuel that is ever more vulnerable to ignition.

Not only do these conditions generate a higher risk of extreme fires during fire season — sparking blazes like June’s Erskine Fire which burned 200 homes and was the most destructive fire in this California county’s history — but they also increasingly spark large wildfires out of season. It’s a set of conditions that basically generates a year-round fire season for the state, even as it also sparks winter wildfires at far-flung locations around the world.

Posted by seemorerocks at 20:36