'Merciless' heat, humidity sticks to nearly all of US (Update) 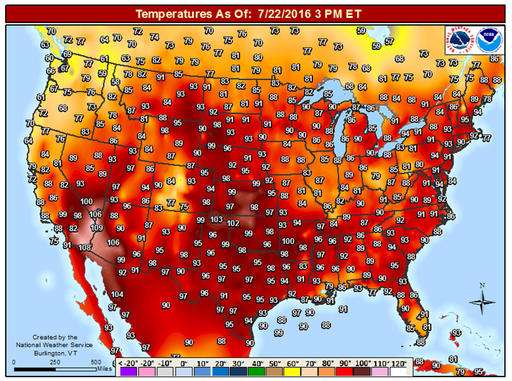 Call it the United Sweats of America. A heat wave spreading across the country is leaving few places to hide. Not even the cool of night.

By Friday afternoon, all but one of the Lower 48 states had hit 90 degrees Fahrenheit (32 degrees Celsius) somewhere, with only Washington state around for cooler comfort. For much of the country, it was expected to get even worse over the weekend.

"It's just day after day. Merciless," said Jeff Masters, meteorology director of the private Weather Underground. "We don't often see this much of the country this hot for this length of time."

And while the extra hot weather will ease a bit next week for good chunks of the country, the temperature forecast for the next three months isn't exactly promising, according to the National Oceanic and Atmospheric Administration.

For the first time in more than 20 years, the Climate Prediction Center map is shades of one color: orange for above normal temperatures.

The map usually varies, showing places where there is a greater chance for above or below normal temperatures or equal chances. But the outlook for August, September and October is for above normal everywhere.

Center climate scientist Dan Collins said the center's archives go back to 1995 and they've never seen this for the entire United States—including Alaska and Hawaii. That doesn't mean a three-month heat wave, just on average warmer than normal temperatures through October.

"Unusual indeed," Collins said. "But maybe less so as the years pass."

Scientists haven't calculated if man-made global warming from the burning of fossil fuels is a factor in the current heat wave, but said it has been a factor in most recent ones and a good chance here, too.

What's happening now is a ridge of high pressure has just spread over almost the entire United States. That keeps clouds and cooling away, and just pushes warm air down.
Add to that the humidity, which makes everything feel stickier. It's coming with warmer ocean water, especially from a hotter-than-normal Gulf of Mexico, Masters said.

The high heat and humidity will move from the Corn Belt toward the Southeast over the weekend, according to the National Weather Service.

On Monday, the weather service forecasts that nearly all of the Lower 48 states could hit 95 on the heat index , which factors in humidity. And about 30 states are forecast to hit 100.

The high temperature averaged for the Lower 48 states was 92 degrees F (33.5 degrees C) on both Thursday and Friday, the warmest since June of 2012, said meteorologist Ryan Maue of the private WeatherBell Analytics service.

Not even the cool of night is helping because temperatures aren't dropping as much as they normally do. That's a health issue because the human body relies on the evening coolness for relief, said Greg Carbin, a forecast chief for the weather service's Weather Prediction Center.

Heat waves like this one "are kinda like the home run statistic in steroid-fueled baseball," University of Georgia meteorology professor Marshall Shepherd said in an email. "Sure heat waves always happened naturally (like home runs in baseball) but the statistics are shifting to make them more likely and more frequent within a warmer background climate."