Hearing from the whistleblowers - Assange and Snowden speak out

Julian Assange: Choosing Between Trump or Clinton is Like Picking Between Cholera or Gonorrhea

http://democracynow.org - In March, WikiLeaks launched a searchable archive for over 30,000 emails & email attachments sent to and from Hillary Clinton’s private email server while she was secretary of state. The 50,000 pages of documents span from June 2010 to August 2014; 7,500 of the documents were sent by Hillary Clinton. The State Department released the emails as a result of a Freedom of Information Act request.

Snowden Scoffs at Accusations of Russian Hand in US Democrats' Scandal
In an all-too familiar tactic shared by the US political right and left alike, the Democratic Party has blamed the WikiLeaks release of internal emails on Russia. NSA whistleblower Edward Snowden, however, isn’t convinced. 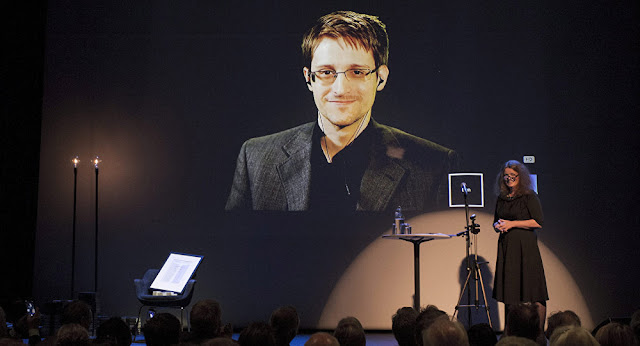 Over the weekend, WikiLeaks released a cache of some 20,000 emails from high-ranking members within the Democratic National Committee (DNC). The correspondence has embarrassed party elites, showing an obvious bias against Clinton’s primary opponent Bernie Sanders. The revelations have already forced DNC chair Debbie Wasserman Schultz to step down.

Rather than discuss the content of the emails, the DNC has instead launched a smear campaign against WikiLeaks, and alleged that the organization received the information from hackers hired by the Russian government.
These claims were made without any evidence, and few seem convinced. Among the skeptics is NSA whistleblower Edward Snowden, who points out in a series of tweets that if there was any evidence of Russian involvement, it would be easy to deduce.

Edward SnowdenVerified account‏@Snowden
Even if the attackers try to obfuscate origin, #XKEYSCORE makes following exfiltrated data easy. I did this personally against Chinese ops.
1:58 AM - 26 Jul 2016
517 retweets705 likes

Blaming Russia for various embarrassments has been a favorite Western tactic for decades, but recent months have seen a dramatic uptick in the policy. In the lead-up to last month’s Brexit referendum, former UK Prime Minister David Cameron suggested that Russian President Vladimir Putin had a vested interest in the result.

"It is worth asking the question: who would be happy if we left [the EU]? Putin might be happy. I suspect [Daesh leader] al-Baghdadi would be happy," he said.
Putin dismissed the allegations.
"Statements made by the UK prime minister, Mr. Cameron, before this plebiscite, before this referendum, on Russia’s stance, have no basis and never had," the Russian president said. "I believe that this is nothing more than a flawed attempt to influence the public opinion in his own country."
They’re With Her: US Media Uses Putin, Russia to Label Trump a Traitor

Western pundits have also attempted to blame Moscow for the rise of Republican presidential candidate Donald Trump. These claims are based largely on the fact that the billionaire has noted that he respects the Russian president as a leader, and would seek to improve relations between the two countries.
"It’s no secret that the 'demonization of Russia' and all that is connected with Russia, unfortunately, is an essential feature of the US election campaign," Kremlin spokesman Dmitry Peskov said in March. "We always deeply regret it and wish electoral processes would do without such references to our country."
WikiLeaks founder Julian Assange has also come under attack for the fresh email leak, criticized for focusing on Democrats. But in an interview with Democracy Now, Assange made clear that he has little appreciation for either major US presidential candidate.
"Well, you’re asking me, do I prefer cholera or gonorrhea?" he said. "Personally, I would prefer neither."

Tom Cahill
WikiLeaks founder Julian Assange says his next leak will virtually guarantee an indictment of Hillary Clinton.
In a recent interview with ITV, Assange said the whistleblowing website will soon be leaking documents that will provide “enough evidence” for the Department of Justice to indict the presumptive Democratic nominee. WikiLeaks has already published 30,322 emails from Clinton’s private email server, spanning from June 30, 2010 to August 12, 2014. While Assange didn’t specify what exactly was in the emails, he did tell ITV that WikiLeaks had “accumulated a lot of material about Hillary Clinton, which could proceed to an indictment.”

Assange hinted that the emails slated for publication contain additional information about the Clinton Foundation. He also reminded ITV’s Robert Peston that previously released emails contained one damning piece of communication from Clinton, instructing a staffer to remove the classification settings from an official State Department communication and send it through a “nonsecure” channel. Assange then pointed out that the Obama administration has previously prosecuted numerous whistleblowers for violating the government’s procedures for handling classified documents.

In regard to the ongoing FBI investigation, however, Assange expressed a lack of confidence in the Obama administration’s Justice Department to indict the former Secretary of State.
“[Attorney General Loretta Lynch] is not going to indict Hillary Clinton. It’s not possible that could happen. But the FBI could push for new concessions from the Clinton government in exchange for its lack of indictment.”
WikiLeaks has long been a thorn in the side of the former Secretary of State, who called on President Obama to prosecute the whistleblowing site after its 2010 leak of State Department cables. Julian Assange remains confined to the Ecuadorian Embassy in downtown London, as Ecuador has promised to not hand over the WikiLeaks founder to US authorities.