Many thanks to Harold Hensell and Sam Carana 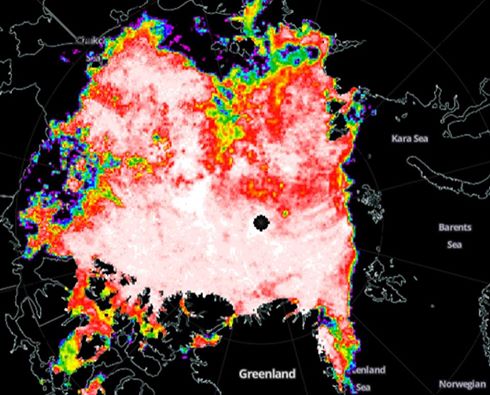 
Here's a forecast for about a week from now, which has almost all remaining ice inside of the CAB — and even more so for the rest of August and not to mention September and October.... I think this map shows you why I believe CAB area will be the most interesting graph to watch forward, as all the ice elsewhere will melt out anyway.

Forecast seems to indicate that we ARE truly 2–3 weeks ahead in the collapse, compared to 2012.

You really couldn't tell by looking only at full Arctic ice extent figures. 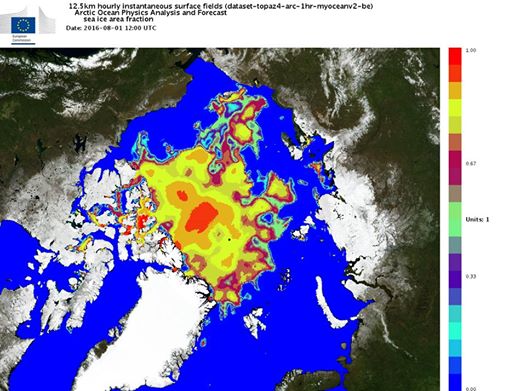 Here is a comparison with previous years

What follows is an article from Arctic News from 19 July last year for comparison.

The image below compares the Arctic sea ice thickness (in m) on July 15, for the years from 2012 (left panel) to 2015 (right panel), using Naval Research Laboratory images.

The image below compares the Arctic sea ice concentration (in %) on July 18, for the years from 2012 (left panel) to 2015 (right panel), using Naval Research Laboratory images. 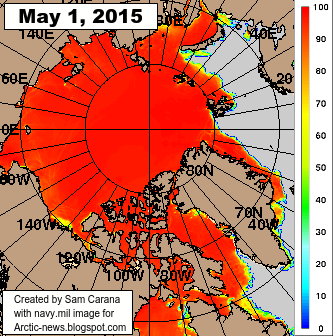 Above images show the dramatic decline of the sea ice in 2015, both in thickness and in concentration.

In terms of thickness, sea ice has been reduced by more than one meter in many places, such as north of Greenland and the Canadian Archipelago, all in the time span of just one month.

This dramatic decline of the sea ice in 2015 is the result of a combination of factors, including:

The image below shows the already very high sea surface temperature anomalies as at July 18, 2015. 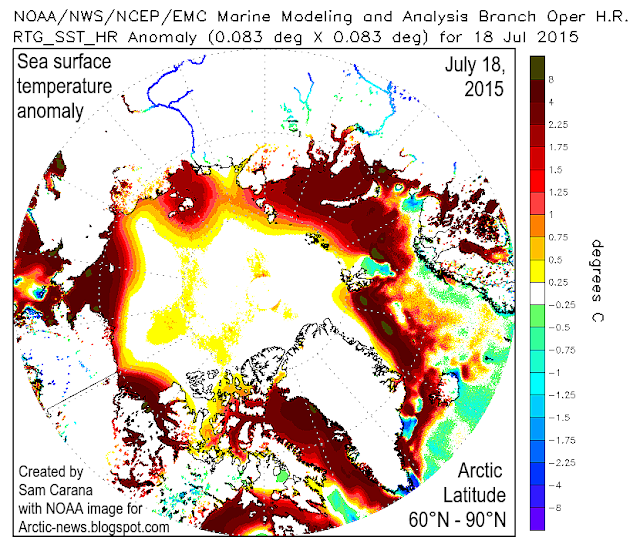 The Climate Reanalyzer image below shows the high sea surface temperature anomalies in the Pacific Ocean, and where water enter the Arctic Ocean through the Bering Strait, on July 19, 2015. 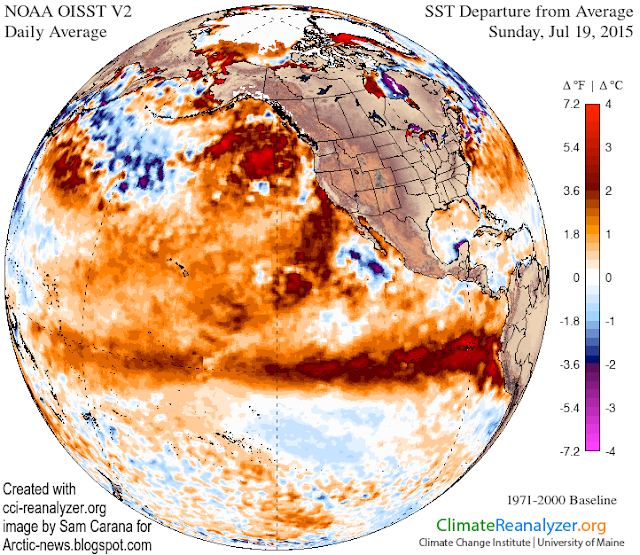 With still two months of melting to go before the sea ice can be expected to reach its minimum for 2015, the threat of sea ice collapse is ominous. The Arctic-News Blog has been warning for years about the growing chance of a collapse of the sea ice, in which case huge amounts of sunlight that previously were reflected back into space, as well as heat that previously went into melting the ice, will then instead have to be absorbed by the water, resulting in a dramatic rise of sea surface temperatures.

More open water will then come with an increased chance of storms that can cause high sea surface temperatures to be mixed down all the way to seafloor of the Arctic Ocean, which in many cases is less than 50 m (164 ft) deep. This is the case for the East Siberian Arctic Shelf, where experts estimate that huge amounts of methane are contained in subsea sediments. Already now, sea surface temperatures as high as 10°C (~50°F) are recorded there, as illustrated by the image below.