Naïve, & young American progressives discover, alas too late, that Bernie is not the revolutionary they wanted and needed him to be.‪#‎ToldYouSo‬"

Bernie Sanders endorsed Hillary Clinton two weeks ago — and we just saw a dramatic demonstration that not all of his supporters are particularly happy about it.


While addressing a rally of Sanders supporters in Philadelphia on Monday afternoon, the senator said, "We have got to defeat Donald Trump, and we have got to elect Hillary Clinton and Tim Kaine" — and he was met by a chorus of boos

he loud booing continued for some time. "Brothers and sisters. This is the real world that we live in," Sanders said. "Trump is a bully and a demagogue. Trump has made bigotry the cornerstone of his campaign."

Leaked memo: Sanders team wanted use of plane in exchange for backing Clinton


A leaked memo shows the Bernie Sanders campaign considered asking the Democratic National Convention for a private plane as part of his endorsement of Hillary Clinton to help “keep his movement energized.”

The memo, entitled ‘End Game’, was drafted on June 5, only two days before the California primary, and was obtained byBuzzFeed News after it was found in a Los Angeles hotel where Sanders campaign staff had spent the night.

It details the “key decisions” the Sanders campaign would face in the aftermath of the June 7 primaries and the options open to it to maintain the momentum behind the Vermont senator.

While many Sanders supporters were adamant for him to stay in the race, it’s clear from the memo that his campaign team knew this would be unlikely.
The team acknowledges that as the Convention draws closer its “leverage will diminish.”

“As we get closer to the convention the pressure from the Democratic Party to preserve unity will weigh more and more heavily on us rather than Clinton.”
It also adds that “some Sanders supporters/endorsers will also begin to call for a concession and some may goes as far as moving their support to Clinton."

One of the headings included in the four-page document is entitled ‘Fall Campaign’ and suggests that, prior to the DNC Convention, they should open negotiations with DNC leaders on how Sanders “can be most helpful” in the run-up to November’s general election. 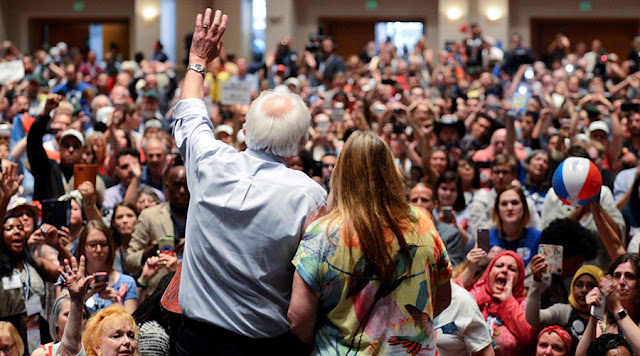 One suggestion is that they should “request a plane and staff for a series of fall rallies in battleground states” and that it“would be paid for by the DNC.”
The rationale behind the request was that the more Sanders campaigned, “the more credit he can take for a Democratic victory and continue to keep his movement energized and in place.”

“It would also make great sense to focus on younger voters,” the memo reads. “Sanders can both help deliver a majority and take credit for it. Campaign for Progressive Supporters.”

The campaign says that “helping elect progressive supporters will extend the Sanders legacy and build progressive strength for future policy battles.”
The memo also outlines some of the “strategic decisions” the campaign faces, including whether they should force a roll-call vote for the nomination at the Convention and if they should concede before the event takes place.

In terms of the latter, a decision on the matter should, the memo states, “be done with planning and are.”

READ MORE: DNC chair Schultz resigns following WikiLeaks revelations
In terms of the convention itself, the team said that the Tuesday night should be “the Sanders night” and that during a prime-time speech he “would reinforce his impact on the party.”