The global economy is stopping: the Atlantic deserted of freighter ships

The following story is one that I might not have given much credance but for the fact that there is other infomation coming in that confirms that there is no shipping in the Atlantic and that the global economy is literally stopping.

You will look in vain for reflection of this in the stock market and in the western, mainstream media.

You only need to look at the Baltic Shipping Index, one of the reliable indicators of the state of the real economy.

Major Ships Evacuate Atlantic Ocean For First Time In History
Russian Naval Forces have reported that the entire Atlantic Ocean appears to be totally deserted of major freighter ships for the first time in recorded history.

The Kremlin say that Panamax and New Panamax vessels, plus all types of wet carrier (oil/liquified natural gas) vessels including VLCC and ULCC supertanks are nowhere to be seen.

Russia claim that the evacuation of the Atlantic ocean is a “clear” sign of a coming Western economic/banking collapse, with the world’s stock markets crashing during the first part of the year being another clear signal.

Further confirmation of this historic abandoning of the Atlantic Ocean, this report says, was noted this past November when an over two mile line of oil tanker vessels were reported to be sitting off the Gulf of Mexico coast of Galveston, Texas, due to their being no place to offload their ships—and has reached such a critical proportion that other oil tankers in route to the US were forced three weeks ago to turn around in the Atlantic Ocean as there was no longer any more room left for their cargo either.

Grimly though, this report further notes, as the world’s major shipping vessels have now abandoned the Atlantic Ocean, the same cannot be said of the Obama regimes United States Navy (USN) whose Lewis and Clark class cargo ships are continuing their non-stop armament shipments to Saudi Arabia—where the bulk of these weapons and ammunition shipments end up the hands of Islamic State (ISIS/ISIL/Daesh) terrorists operating the Levant War Zone.

As to why the Obama regime is continuing to arm these Islamic State terrorists through USN weapons shipments to Saudi Arabia, this report questions, is “beyond understanding”—including to former President Ronald Reagan top official David Stockman, who in his research article yesterday titled Enough Already! It’s Time To Send The Despicable House Of Saud To The Dustbin Of History bluntly stated:

“ …for more than four decades Washington’s middle eastern policy has been dead wrong and increasingly counter-productive and destructive. The crisis provoked this past weekend by the 30-year old hot-headed Saudi prince, who is son of the King and heir to the throne, only clarified what has long been true.

That is, Washington’s Mideast policy is predicated on the assumption that the answer to high oil prices and energy security is deployment of the Fifth Fleet to the Persian Gulf. And that an associated alliance with one of the most corrupt, despotic, avaricious and benighted tyrannies in the modern world is the lynch pin to regional stability and US national security.

Nothing could be further from the truth. The House of Saud is a scourge on mankind that would have been eliminated decades ago, save for Imperial Washington’s deplorable coddling and massive transfer of arms and political support.”

To the American people being allowed by the Obama regime and its mainstream “presstitute” news services to know of this grave occurrence in the Atlantic Ocean, this report concludes, appears, like always, to not be the case as this government would rather see these once great people alarmed and confused rather than trusting them with true facts so that at least some of them may be able to prepare themselves for the storms that are soon to come. 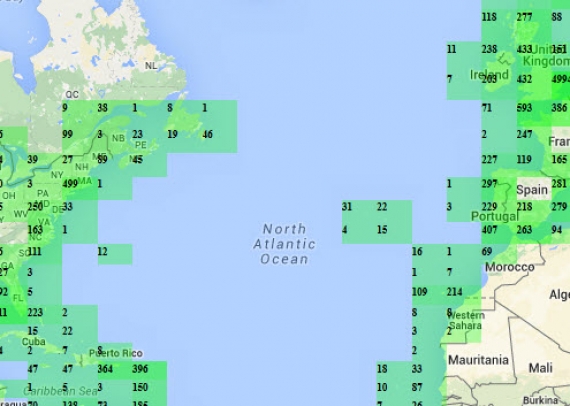 This has never happened before.  It is a horrific economic sign; proof that commerce is literally stopped.

The reason commerce has stopped is simple: People are not buying things.   When people do not buy things, retailers do not sell things, so they do not order more goods for stock.

When there are no orders for raw materials, commodities sellers do not sell raw materials. When no raw materials are sold, there is no shipping by large cargo ships, (or railroads or tractor trailers) to move anything.

Put simply, the global economy is LITERALLY stopping.  Right now.  Today.
How things go from this point forward is simple:  Without sales, retailers are not even "turning dollars" so they will have to layoff employees and close stores.

Without orders, manufacturers will have to layoff employees and shut down.

When manufacturing shuts down, suppliers of commodities will have to layoff employees and cease operations.   As all of this economic activity comes to a halt, then the disaster REALLY takes off:

When businesses are not even "turning dollars" they cannot pay back their loans.  Retailers, manufacturers and commodities suppliers will begin defaulting on bank loans within 30 days.  When enough of them default, it begins taking-out banks.

As banks begin to fail, others will run to their banks to withdraw money for fear THEIR bank will fail too; and therein starts "bank runs."

In the meantime, stock values plummet and people's life savings in retirement accounts, 401-k's, IRA's and the like, get wiped out of existence.
We are literally standing at the edge of an abyss.  It appears we are about to go over that cliff . . .

The Baltic Shipping index is down 40 per cent 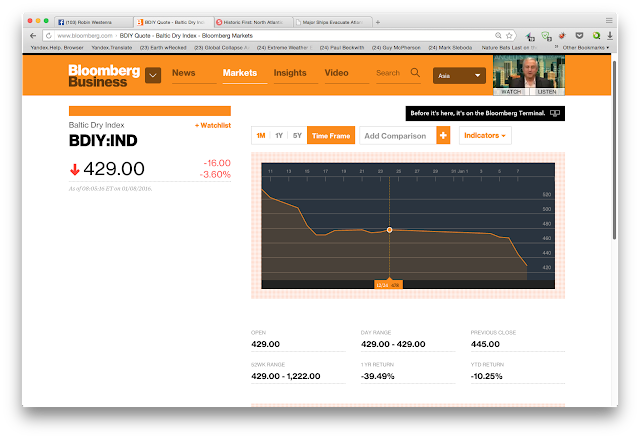 Something Very Strange Is
Taking Place Off The Coast Of
Galveston, TX

Having exposed the world yesterday to the 2-mile long line of tankers-full'o'crude heading from Iraq to the US, several weeks after reporting that China has run out of oil storage space we can now confirm that the global crude "in transit" glut is becoming gargantuan and is starting to have adverse consequences on the price of oil.

While the crude oil tanker backlog in Houston reaches an almost unprecedented 39 (with combined capacity of 28.4 million barrels), as The FT reports that from China to the Gulf of Mexico, the growing flotilla of stationary supertankers is evidence that the oil price crash may still have further to run, as more than 100m barrels of crude oil and heavy fuels are being held on ships at sea (as the year-long supply glut fills up available storage on land). The storage problems are so severe in fact, that traders asking ships to go slow, and that is where we see something very strange occurring off the coast near Galveston, TX.

FT reports that "the amount of oil at sea is at least double the levels of earlier this year and is equivalent to more than a day of global oil supply. The numbers of vessels has been compiled by the Financial Times from satellite tracking data and industry sources."

The storage glut is unprecedented:


Off Indonesia, Malaysia and Singapore, Asia’s main oil hub, around 35m barrels of crude and shipping fuel are being stored on 14 VLCCs.

“A lot of the storage off Singapore is fuel oil as the contango is stronger,” said Petromatrix analyst Olivier Jakob. Fuel oil is mainly used in shipping and power generation.

Off China, which is on course to overtake the US as the world’s largest crude importer, five heavily laden VLCCs— each capable of carrying more than 2m barrels of oil — are parked near the ports of Qingdao, Dalian and Tianjin.

In Europe, a number of smaller tankers are facing short-term delays at Rotterdam and in the North Sea, where output is near a two-year high. In the Mediterranean a VLCC has been parked off Malta since September.

A further 8m barrels of oil are being held off the UAE, while Iran — awaiting the end of sanctions to ramp up exports — has almost 40m barrels of fuel on its fleet of supertankers near the Strait of Hormuz. Much of this is believed to be condensate, a type of ultralight oil.

And unlike the last oil price collapse during the financial crisis only half of the oil held on the water has been put there specifically by traders looking to cash in by storing the fuel until prices recover. Instead, sky-high supertanker rates have prevented them from putting more oil into so-called floating storage, shutting off one of the safety valves that could prevent oil prices from falling further.

The difference between Brent for delivery in six months’ time and now rose to $4.50 last week, up from $1.50 in May.Traders estimate it may need to reach $6 to make sea storage viable.

JBC Energy, a consultancy, said in many regions onshore oil storage is approaching capacity, arguing oil prices may have to fall to allow more to be stored profitably at sea.


“Onshore storage is not quite full but it is at historically high levels globally,” said David Wech, managing director of JBC Energy.

“As we move closer to capacity that is creating more infrastructure hiccups and delays in the oil market, leading to more oil being backed out on to the water.”

Patrick Rodgers, the chief executive of Euronav, one of the world’s biggest listed tanker companies, said oil glut was so severe traders were asking ships to go slow to help them manage storage levels.

“We are being kept at relatively low speeds. The owners of the oil are not in a hurry to get their cargoes. They are managing their storage capacity by keeping ships at a certain speed.”

As a result of all this, something very unusual going on off the coast of Galveston, where more than 39 crude tankers w/ combined cargo capacity of 28.4 million bbls wait near Galveston (Galveston is area where tankers can anchor before taking cargoes to refineries at Houston and other nearby plants), vessel tracking data compiled by Bloomberg show, which compares w/ 30 vessels, 21 million bbls of capacity in May. Vessels wait avg of 5 days, compared w/ 3 days May.
As AP puts it, "a traffic jam of oil tankers is the latest sign of an unyielding global supply glut."

Although the channel has been shut intermittently in recent weeks because of fog or flooding, oil traders pointed to everything from capacity constraints to a lack of buyers.

“It appears that the glut of supply in the global market is only getting worse,” said Matt Smith, director of commodity research at ClipperData. Several traders said some ships might have arrived without a buyer, which can be hard to find as ample supply and end-of-year taxes push refiners to draw down inventories.

And here, courtesy of MarineTraffic is the interactive snapshot (readers can recreate it here):

All of which explains why this is happening: