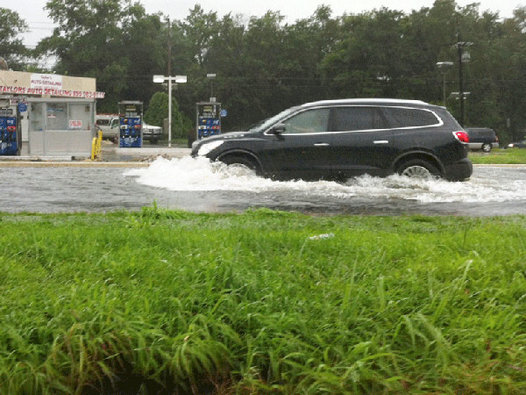 A Sunday afternoon deluge turned roads into rivers in South Jersey, submerging cars and stranding drivers, and set a record for one-day rainfall in Philadelphia.

During a six-hour period from 2 to 8 p.m., 7.38 inches of rain fell at the Philadelphia International Airport, according to the National Weather Service. NWS meteorologist Patrick O'Hara confirmed that the rain total this afternoon set the city's daily record since record tallying began in 1872.

A portion of Terminal A at the airport lost power for a few hours in the early evening and backup generators didn't immediately turn on, according to reports. Airport officials were still working to restore power at 9 p.m., reports said.

And the rain wasn't over just yet.

Late-day flash floods hit Camden, Bellmawr and Paulsboro leading to sporadic road closures, according to police dispatchers and scanner reports. In Gloucester City, a stretch of Route 130 under Route 295 was "completely flooded" and had cars submerged, the Breaking News Network said.

No injuries were reported.

By 7 p.m., the National Weather Service reported minor flooding of the Cooper River


Tour bus flips over in wash amid Ariz. rain storm 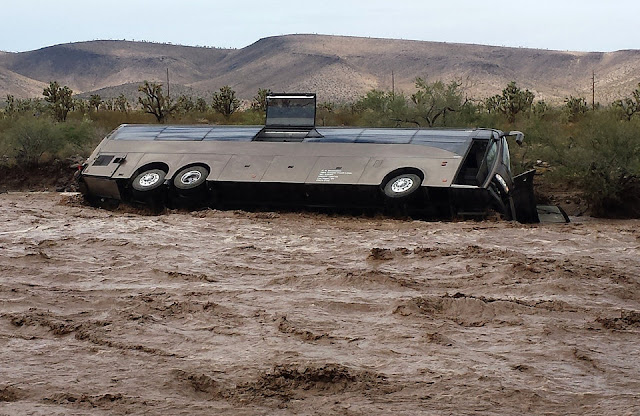 DOLAN SPRINGS, Ariz. (AP) — A Las Vegas-bound tour bus carrying 33 people was swept away by Arizona floodwaters as the driver attempted to cross a wash before turning the bus on its side amid heavy rains.

No one was injured. The bus returning on a rural Arizona road from a day-trip to the Grand Canyon's west rim was pushed down the wash for an estimated 300 yards around 1:50 p.m. near Kingman, said Patrick Moore, chief of the Northern Arizona Consolidated Fire District, which had firefighters at the scene. The crash happened as northern Arizona was hit with a second day of heavy rain.

The area where the bus accident occurred received 0.75 inches of rain in about an hour on Sunday afternoon, said Chris Stumpf, a National Weather Service forecaster in Las Vegas. A flash flood warning was in effect when the accident occurred, he said, and the bus driver shouldn't have been driving through the area at the time.

"It was a really strong storm dumping quite a bit of rain ... and it caused flash flooding," Stumpf said. "They were driving on a portion of the road where they shouldn't have tried to drive across. They should not have been driving through there."

Rhonda Ho, operations manager for Canyon Coach Lines, said the bus owned by the Las Vegas-based company was returning from a day-trip to the Grand Canyon's west rim when driver Joseph Razon saw a car right in front of him go through a section of the highway covered by some water, and "he thought, if a car can go through it, I can go through it."

"Then he got slammed by a rushing current of water that came out of nowhere," she said. "He was driving in almost neck-deep water and trying to control the bus while it was floating."

After being swept down the flood of water, she said, Razon determined it would be unsafe for the bus to float anymore. He then intentionally tilted the bus against an embankment so it would stop and passengers could escape through its roof. People inside the bus were able to climb out of the driver's side windows and walked to dry land.

"I'm glad the driver kept his cool and everybody got out safely. No one screamed on the bus and everyone kept their cool and that's amazing," Ho said.

She described Razon as a "very professional driver" with a spotless record. He has worked for the company since 2005.

Kingman is near the Arizona-Nevada stateline and about 100 miles southeast of Las Vegas. The bus passengers and driver returned on another bus to Las Vegas, where Ho was able to speak to the driver.

On Sunday evening, as a tow truck was preparing to take away the bus, it was lying on its side and had grass and other debris hanging from it. Two escape hatches on its roof were opened. Writing on the side of the bus said: "C.H. Destination" and "DBA: Canyon Coach Lines"

The passengers were no longer at the scene. The company had sent another bus to pick them up.

There were some swift-water rescues of stranded motorists Saturday night after a storm dropped nearly 2 inches of rain in about 90 minutes around Kingman, Stumpf said.

The flash flood warning around the accident scene has expired, he said, but there's a chance for more heavy rain and another similar warning on Monday.

The crash happened as Northern Arizona was hit with a second day of heavy rain.

The Arizona Department of Transportation closed an 18-mile stretch of Interstate-40 Saturday night between Flagstaff and Kingman because of the flash flooding.

Has Summer Heat Come to an End?

A recent push of autumnlike air from the Midwest to the East and part of the South has some folks wondering if the sun has yielded its last stretch of summer heat.

Regardless of how temperatures behave, summer does not officially end until Sept. 22. Meteorological summer comes to a close in early September, and solar summer winds down in early August.

However, what does the weather in August have in store based on seasonal changes, meshed with the month's unique forecast weather patterns? Will the back-and-forth extremes continue in the Midwest and Northeast? Will the heat and drought continue in the West? 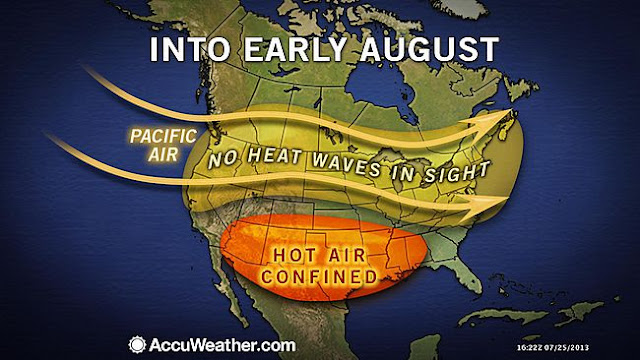 "Cool weather will continue in the Northeast into the first week of August," Pastelok said, "But, hot and humid weather is likely to return during weeks two and three."

That will mean plenty of good days at the beach and in the mountains through the end of the month. 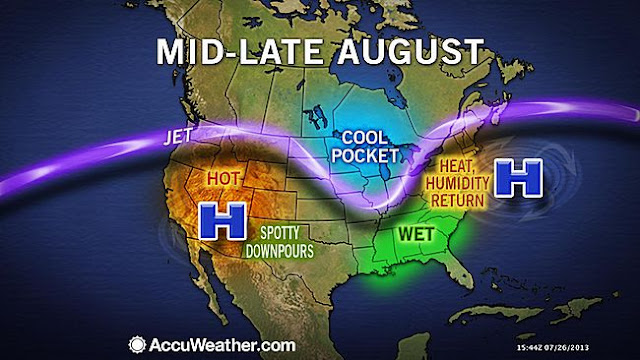 A lower sun angle and lengthening nights may take the edge off the heat somewhat, so that it may not feel quite as extreme as the mid-July heat wave.
AccuWeather.com RealFeel® temperatures peaked well above 100 degrees in many areas for multiple days. In some cases, it felt hotter than 110 degrees. For cool weather lovers and those in poor health, the nights were unbearable without air conditioning.

The re-building warmth toward mid-August will likely bring another surge in energy demands.

In New York City, energy demand was generally higher at night during the heat wave than when it was most days this week. While longer nights during August may counteract some of the energy demand later this month, a return of high humidity may still make the nights warmer than average.

"The northern and central Plains to the Midwest have a chance at significant, persistent cool weather during August," Pastelok said, "Position and magnitude of a southward dip in steering winds will determine how extensive that cool pocket is for the Midwest and if it could continue to reach part of the Northeast or back off."

The recent cool weather made a big difference in energy demands at Chicago's ComEd. While no record usage was set during the mid-July heat wave, demand peaked at 22,269 megawatts on Thursday, July 18, 2013. This, compared to much lower peak usage of 15,900 megawatts during the first four days this week.

The Southeast can expect an extension of the mild June and and July conditions into August.

According to Brian Green, spokesman for Georgia Power, the utility company has not come close to their record demand, because of the mild conditions this summer.

"Much of the Southeast will remain generally wet with temperatures averaging near to slightly cooler than normal, but there may not be as many days with rain from the Gulf Coast to New England, compared to earlier in the summer," Pastelok stated.

According to Long-Range Meteorologist Mark Paquette, "Dorian is one possible system to watch for rainfall impact in the Southeast, but with high pressure set up the way we think it will be during August, the door is open for a Gulf of Mexico tropical system impact during the month."
In much of the West, heat will fire up toward the middle of the month causing demands for energy to rise.

Look for showers and thunderstorms affecting the Southwest to expand northward toward the northern Rockies and Snake River Basin during August.

According to Western Weather Expert Ken Clark, "The monsoon showers and thunderstorms will continue to make some small dents in the drought, but only at a very local level and not for a long-term perspective."

"Later in the month, we expect the isolated downpours to begin to diminish in the Southwest," Pastelok added, "But central and coastal Texas may begin to receive showers and storms more often."

Much of California will be dry, except for spotty storms mainly over the Sierra Nevada.

As a result of the diminishing showers and thunderstorms in the Southwest, as well as drying vegetation, the threat of wildfires will continue.
"In the Northwest, the dry weather may wind down a little earlier earlier than average with the chance of some coastal rainfall later in the month," according to Pastelok.

So, is summer over?

Even in parts of the Midwest, where cool air may be a frequent visitor, there will still be some warm days. In the South, temperature departures will be so slight that there will be plenty of sufficiently warm days to call it summer. The Northeast will experience a return of heat and humidity. Plenty of hot weather is in store for the West with the cool spots being the high country and the immediate Pacific coast.

Balancing out the extent of temperature extremes, the heavily populated Northeast and its thirst for keeping cool may drive energy demands through much of August.

According to the U.S. Energy Information Administration, in 2012, about 68 percent of the electricity generated in the nation was from fossil fuels (coal, natural gas and petroleum). 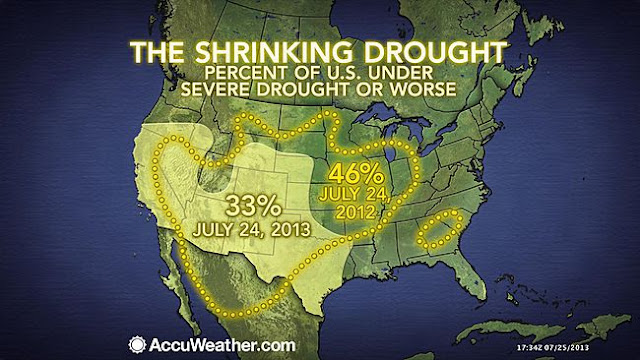 Posted by seemorerocks at 17:13