Ice-free winters during the Pliocene

Ice-Free Arctic Winters Could Explain Amplified Warming During Pliocene
Year-round ice-free conditions across the surface of the Arctic Ocean could explain why Earth was substantially warmer during the Pliocene Epoch than it is today, despite similar concentrations of carbon dioxide in the atmosphere, according to new research carried out at the University of Colorado Boulder. 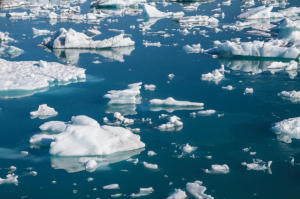 In early May, instruments at the Mauna Loa Observatory in Hawaii marked a new record: The concentration of carbon dioxide climbed to 400 parts per million for the first time in modern history.

The last time researchers believe the carbon dioxide concentration in the atmosphere reached 400 ppm -- between 3 and 5 million years ago during the Pliocene -- Earth was about 3.5 to 9 degrees Fahrenheit warmer (2 to 5 degrees Celsius) than it is today. During that time period, trees overtook the tundra, sprouting right to the edges of the Arctic Ocean, and the seas swelled, pushing ocean levels 65 to 80 feet higher.

Scientists' understanding of the climate during the Pliocene has largely been pieced together from fossil records preserved in sediments deposited beneath lakes and on the ocean floor.

"When we put 400 ppm carbon dioxide into a model, we don't get as warm a planet as we see when we look at paleorecords from the Pliocene," said Jim White, director of CU-Boulder's Institute of Arctic and Alpine Research and co-author of the new study published online in the journal Palaeogeography, Paleoclimatology, Palaeoecology. "That tells us that there may be something missing in the climate models."

Scientists have proposed several hypotheses in the past to explain the warmer Pliocene climate. One idea, for example, was that the formation of the Isthmus of Panama, the narrow strip of land linking North and South America, could have altered ocean circulations during the Pliocene, forcing warmer waters toward the Arctic. But many of those hypotheses, including the Panama possibility, have not proved viable.

For the new study, led by Ashley Ballantyne, a former CU-Boulder doctoral student who is now an assistant professor of bioclimatology at the University of Montana, the research team decided to see what would happen if they forced the model to assume that the Arctic was free of ice in the winter as well as the summer during the Pliocene. Without these additional parameters, climate models set to emulate atmospheric conditions during the Pliocene show ice-free summers followed by a layer of ice reforming during the sunless winters.

"We tried a simple experiment in which we said, 'We don't know why sea ice might be gone all year round, but let's just make it go away,' " said White, who also is a professor of geological sciences. "And what we found was that we got the right kind of temperature change and we got a dampened seasonal cycle, both of which are things we think we see in the Pliocene."

In the model simulation, year-round ice-free conditions caused warmer conditions in the Arctic because the open water surface allowed for evaporation. Evaporation requires energy, and the water vapor then stored that energy as heat in the atmosphere. The water vapor also created clouds, which trapped heat near the planet's surface.

"Basically, when you take away the sea ice, the Arctic Ocean responds by creating a blanket of water vapor and clouds that keeps the Arctic warmer," White said.

White and his colleagues are now trying to understand what types of conditions could bridge the standard model simulations with the simulations in which ice-free conditions in the Arctic are imposed. If they're successful, computer models would be able to model the transition between a time when ice reformed in the winter to a time when the ocean remained devoid of ice throughout the year.

Such a model also would offer insight into what could happen in our future. Currently, about 70 percent of sea ice disappears during the summertime before reforming in the winter.

"We're trying to understand what happened in the past but with a very keen eye to the future and the present," White said. "The piece that we're looking at in the future is what is going to happen as the Arctic Ocean warms up and becomes more ice-free in the summertime.

"Will we continue to return to an ice-covered Arctic in the wintertime? Or will we start to see some of the feedbacks that now aren't very well represented in our climate models? If we do, that's a big game changer."
Posted by seemorerocks at 12:19