On freedom and Jon Stephenson

The Contagion Of Evil
Chris Trotter 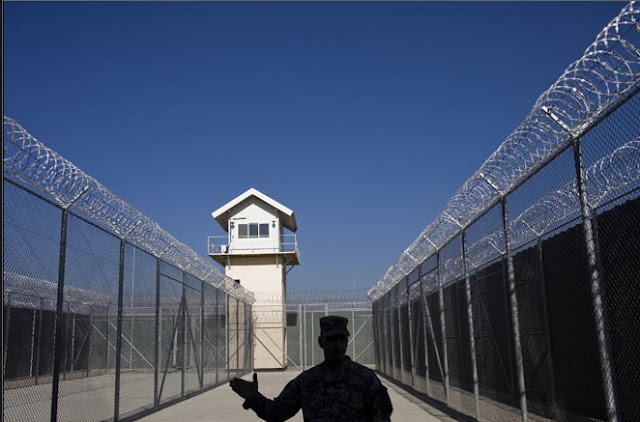 The Black Prison: The United States new detention facility on Bagram Airbase a few kilometres north of Kabul in Afghanistan. Recent revelations concerning the behaviour of the NZDF in that country - most particularly its use of US surveillance facilities to monitor the activities of freelance war correspondent, Jon Stephenson, raise real fears that the evil represented by Bagram's torture chambers is on the point of infecting New Zealand.

THE BAGRAM DETENTION FACILITY was a dark lake of evil, its opaque depths constantly replenished by a thousand tributaries of officially-sanctioned moral depravity. Behind the razor-wire and watch-towers; beyond the foot patrols and guard-dogs; far away from the searchlight-beams and the constantly turning CCTV cameras; deeds were done in the name of our “very, very, very good friends” that only the sickest kind of sadist could observe with equanimity.

To the people of Afghanistan, the innocent as well as the guilty, Bagram became a byword for terror, torture, and the exercise of all the other brutal forms of utterly unaccountable American power.

In March of this year the Bagram Detention Facility, located within the sprawling American airbase of the same name, was handed over to the Afghan Government. It is now known as the Afghan National Detention Facility – proof – according to the American commander of the International Security Assistance Force, General Joseph Dunford, of ISAF’s success in building “an increasingly confident, capable and sovereign Afghanistan.”

Shortly before the formal handover, however, an undisclosed number of prisoners were allegedly moved to a new US-controlled facility – still located within the perimeter wire of the airbase – and known simply as the “Black Prison”. Former detainees also report that US personnel continue to have “access” to the prisoners (or what’s left of them) being held under Afghanistan’s putative authority.

The New Zealand Defence Force (NZDF) still has military intelligence personnel stationed at Bagram Airbase. A former NZDF resident describes it in terms of a small American town uplifted in its entirety and relocated within sight of the snow-capped peaks of the Hindu Kush. She did not reveal the purpose of her posting.

Jon’s stories from Afghanistan, stripped of all their incidental detail, have been about only one thing: the contagion of evil.

Over and over again he has revealed how sending good-hearted New Zealand soldiers to Afghanistan, a war that was, most probably, initiated illegally, and which has, most certainly, been conducted immorally, was bound to result in their slow but certain corruption.

The most vivid confirmation of evil’s contagious effect came in Jon’s award-winning Metro magazine article, “Eyes Wide Shut”, in which he detailed how New Zealand’s troops had repeatedly been obliged to hand over prisoners to US and Afghan authorities, in whose custody, the Kiwis were reasonably sure, they would be subjected to assault and torture.

It was through the increasingly desperate attempts of the NZDF to deny that these events ever happened, and then to discredit the journalist whose detailed and highly accurate reportage constantly undermined those efforts, that some of Bagram’s evil began flowing into the bloodstream of the New Zealand body politic.

Nicky Hager’s story reveals an NZDF so rattled by Jon Stephenson’s investigative reporting that its own security manual included “certain investigative journalists” among its most dangerous antagonists. Or, in Mr Hager’s own words, putting probing journalists up there “on the same list as the KGB and al Qaeda.”

Both affronted and alarmed by Jon Stephenson’s unrelenting reportage, the NZDF turned to the Americans’ vast intelligence-gathering operation for assistance. They also enlisted the aid of New Zealand’s principal security and intelligence gathering agency, the SIS, to root out the journalist’s contacts and sources.

To the NZDF, Stephenson was no longer simply a conscientious journalist attempting to inform his fellow citizens of their government’s actions and hold it to account. He was now regarded as a “subversive”: someone determined to “weaken the military, economic or political strength of a nation by undermining the morale, loyalty or reliability of its citizens.”

Here we see the contagion of evil in all its chilling menace.

Telling the truth has become a subversive act. Informing the public that their soldiers are at risk of becoming embroiled in acts contrary to international law – to war crimes – is now tantamount to aiding the enemy: to treason.

And so, drop by drop, the Bagram poison enters our system. Our Government, determined to avoid further embarrassment by “certain investigative journalists” intends to empower our own Government Communications Security Bureau to assist the NZDF in tracking-down and identifying their sources.

As they did in Afghanistan, they will use the latest intelligence-gathering technology to acquire “metadata” – landline and cellphone logs, e-mail and text traffic - to identify the likes of Jon Stephenson’s and Nicky Hager’s friends and associates; contacts and sources.

Among them will be my own name and telephone numbers.

Bagram will have come home. The contagion of evil will be at my door

Known principally for his weekly political columns and his commentaries on radio and television, Chris Trotter has spent most of his adult life either engaging in or writing about politics. He was the founding editor of The New Zealand Political Review (1992-2005) and in 2007 authored No Left Turn, a political history of New Zealand. Living in Auckland with his wife and daughter, Chris describes himself as an “Old New Zealander” – i.e. someone who remembers what the country was like before Rogernomics. He has created this blog as an outlet for his more elegiac musings. It takes its name from Bowalley Road, which runs past the North Otago farm where he spent the first nine years of his life. Enjoy.

Eyes Wide Shut - The Government's Guilty Secrets in Afghanistan
Posted by seemorerocks at 11:36