This is one of the great positive feedback mechanisms

The biggest thing nature did to fight climate change is no longer working
‘When they get warmer than average, forests in the tropics put more CO2 into the atmosphere than they take out’ 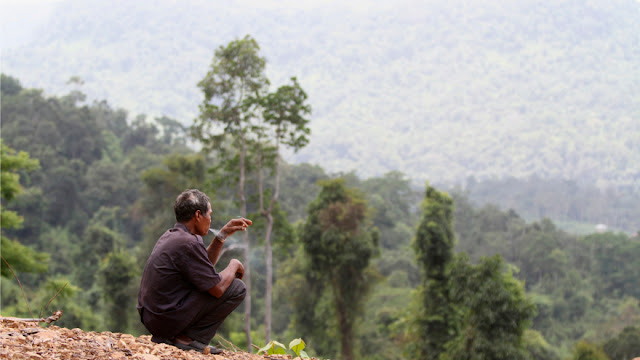 Global temperatures are rising at an alarming rate; already, nine of warmest years in recorded history have been logged since the turn of the century, and 2010 was the warmest to date. Now, a new NASA-led study carried out over a 50-year period raises more alarm bells: Higher temperatures are causing tropical forests to absorb less and less of the atmosphere-eroding carbon dioxide the world produces.

As part of photosynthesis, by which plants synthesize energy, trees absorb carbon dioxide and release oxygen. Tropical forests abound with trees, and help naturally regulate carbon levels. But hotter temperatures are stunting that essential process, leading to higher carbon levels, which in turn cause global temperatures to rise even further.
“When they get warmer than average, forests in the tropics do not like it, and overall they tend to put more CO2 into the atmosphere than they take out,” says study co-author Pep Canadell, executive officer of the Global Carbon Project. “A little more than 50% of all anthropogenic carbon emissions are taken up by the oceans and vegetation on land—that’s 10 billion tonnes of CO2 per year.”
According to the study, which analyzed the relationship between carbon dioxide levels and climate change from 1959 to 2011, researchers found that a one-degree Celsius spike in tropical land surface temperatures leads to an average 3.5 billion tonnes of extra carbon dioxide.
On the one hand, even a single degree spike in Celsius is pretty drastic. It took roughly a century for globe temperatures to notch up about a degree from the early 1900s to the early 2000s. But global temperatures have been rising especially quickly as of late—in the past 20 years alone they’ve jumped by more than a degree—and a 3.5 billion tonne increase is no small deal. As of last year, carbon dioxide emissions stood at some 35 billion tonnes, which means 3.5 billion tonnes would mark a hefty 10% spike.