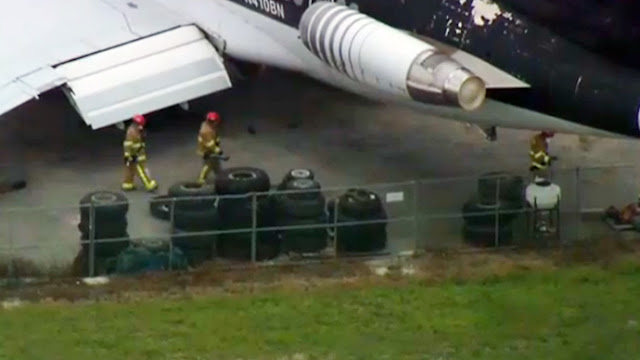 Firefighters cleared a 150-foot area of the Opa-locka Executive Airport in south Florida after a 55 gallon drum located either on or near part of a dismantled aircraft was discovered to be containing exposed, depleted uranium, NBC 6 South Florida reported.

Miami-Dade Fire Rescue Public Information Officer Arnold Piedrahita Jr tweeted that a haz-mat scene was dispatched to the scene to assess the severity of the situation and monitor the levels of radiation.

The rescue team later reduced the size of the impacted "hotzone" to just a five-foot perimiter and declared that the depleted uranium posed minimal to no hazard.

As the investigation entered into the afternoon, the Department of Environmental Protection said someone had dismantled an old airplane, then placed some of the parts within the drum later determined to contain Uranium 238.


According to a local NBC affiliate, a spokesperson for the DEP identified the depleted uranium as from aluminum parts that had been removed from the aircraft.

Opa-locka is a reliever airport which serves as a secondary landing field for aircraft normally going in and out of the larger Miami International Airport. It also is a hub used by the United States Coast Guard for air and sea rescue stations.

Depleted uranium is a radioactive product used in military munitions and fission bombs, and is regulated by the United States Nuclear Regulatory Commission. Earlier this week, RT reported that the US military’s use of depleted uranium during the war in Iraq has led to a sharp increase in cases of Leukemia and birth defects, according to some local doctors.

“After the start of the Iraq war, rates of cancer, leukemia and birth defects rose dramatically in Najaf. The areas affected by American attacks saw the biggest increases. We believe it’s because of the' illegal' weapons like depleted uranium that were used by the Americans. When you visit the hospital here you see that cancer is more common than the flu," Dr. Sundus Nsaif told RT.

According to a local NBC affiliate, officials at Opa-locka say there are no reported injuries.

The Miami-Dade Fire Rescue Department has asked the US Environmental Protection Agency for assistance.