China’s rural pollution causing crop failure –
'Nothing comes from these plants. They look alive, but they’re actually dead inside.’ 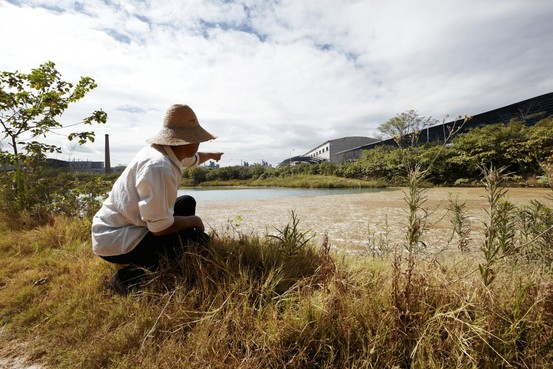 In Dapu, a rain-drenched rural outpost in the heart of China's grain basket, a farmer grows crops that she wouldn't dare to eat.

A state-backed chemicals factory next to her farm dumps wastewater directly into the local irrigation pond, she says, and turns it a florescent blue reminiscent of antifreeze. After walking around in the rice paddies, some farmers here have developed unexplained blisters on their feet.

"Nothing comes from these plants," says the farmer, pointing past the irrigation pond to a handful of stunted rice shoots. She grows the rice, which can't be sold because of its low quality, only in order to qualify for payments made by the factory owners to compensate for polluting the area. But the amount is only a fraction of what she used to earn when the land was healthy, she says. The plants look alive, "but they're actually dead inside."

The experiences of these farmers in Dapu, in central China's Hunan province, highlight an emerging and critical front in China's intensifying battle with pollution. For years, public attention has focused on the choking air and contaminated water that plague China's ever-expanding cities. But a series of recent cases have highlighted the spread of pollution outside of urban areas, now encompassing vast swaths of countryside, including the agricultural heartland.

Estimates from state-affiliated researchers say that anywhere between 8% and 20% of China's arable land, some 25 to 60 million acres, may now be contaminated with heavy metals. A loss of even 5% could be disastrous, taking China below the "red line" of 296 million acres of arable land that are currently needed, according to the government, to feed the country's 1.35 billion people.

Rural China's toxic turn is largely a consequence of two trends, say environmental researchers: the expansion of polluting industries into remote areas a safe distance from population centers, and heavy use of chemical fertilizers to meet the country's mounting food needs. Both changes have been driven by the rapid pace of urbanization in a country that in 2012, for the first time in its long history, had more people living in cities than outside of them.

Yet the effort to keep urbanites comfortable and well-fed has also led to the poisoning of parts of the food chain, and some of the pollution is traveling back to the cities in a different—and for many, more frightening—guise.


"Pollution can be displaced only to an extent. You can't put walls around it," says Judith Shapiro, the U.S.-based author of the recent book China's Environmental Challenges. She is one of a number of researchers and environmental activists—including many in China—who warn that pollution poses an existential threat to the current regime. It is, she says, "perhaps the single most significant determinant of whether the Communist Party will maintain its legitimacy in coming years." [more]
Posted by seemorerocks at 18:54