Methane and the earthquakes 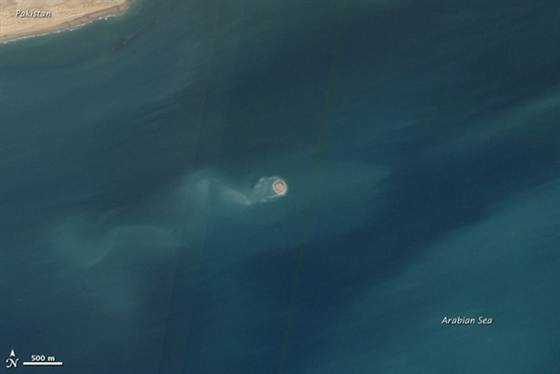 The long-suspected link between earthquakes and underwater methane bursts has finally been confirmed, reports a study published on Sunday in the journal Nature Geoscience.

Though the temblor wasn't caught in the act, the strong shaking left clues in methane-rich mud and sand offshore of Pakistan, where two of Earth's tectonic plates collide at the Makran subduction zone. In 1945, a magnitude-8.1 earthquake struck along the subduction zone, killing at least 300 people and triggering a tsunami.
Recently, researchers studying methane seeps in the Arabian Sea discovered unexpectedly large quantities of methane gas and minerals such as barite and sulfate just below the seafloor surface, on a ridge near the Makran subduction zone. The minerals and gas accumulate at a certain rate, so the team could calculate when the methane indicators first appeared — between 1916 and 1962. Combined with other clues, such as seismic surveys of disturbed sediments, the scientists concluded that the 1945 earthquake released methane gas into the ocean.
"Three lines of evidence came together saying the earthquake triggered the amplification of the methane flux," said David Fischer, lead study author and a geochemist at the MARUM Institute at the University of Bremen in Germany. 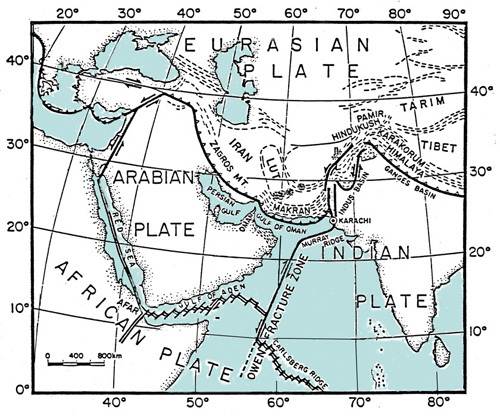 Mother Earth burps
Methane seeps and hydrates pair up with subduction zones around the world. These zones are areas where one of Earth's tectonic plates dives beneath another and where some of the world's strongest earthquakes occur. The incredible pressure from the colliding plates squeezes methane out of seafloor mud and folds the sedimentary layers into ridges — the perfect environment for natural gas deposits
Fischer and his colleagues think the 1945 shaking released a deposit of free methane gas that was locked beneath a layer of methane hydrates, compounds that trap gas in icy lattices. The free gas continues to bubble up to the seafloor today.
"This is the strongest circumstantial evidence we've seen so far on earthquakes perturbing the gas hydrate system," said Anne Trehu, a geophysicist at Oregon State University who was not involved in the study. "It's a difficult phenomenon to verify and I wouldn't say that this is a direct observation, but it's a nice study that shows quite a plausible correlation in time and space."
There's no way to know how much gas erupted during the earthquake. However, modeling of the methane bubbling up today indicates that roughly 261 cubic feet (7.4 cubic meters) of methane gas has been released since 1945, equivalent to the methane coming from a single mud volcano, or enough to fill 2,500 swimming pools, Fischer said. "This is something to consider in the global greenhouse gas budget," Fischer said. Methane gas from subduction zone earthquakes could be an important source of greenhouse gases in the environment, he said.
LiveScience asked Ken Caldeira, a climate scientist at Stanford University's Carnegie Institution for Science, to put that number into perspective. The seep's current emissions are about one-millionth of the natural global methane flux, which is on the order of 100 teragrams (100 megatons), Caldeira said. "I'm skeptical that any one volcano could have a big climate impact," said Caldeira, referring to the study's mud volcano comparison.
Gas stays in the sea
Another caveat is that big subduction zone earthquakes are rare, striking only once a year or less on average. However, no one knows if a sizable shaker is needed to release methane gas from seafloor sediments, or smaller earthquakes can unleash bubbles. And there is evidence of even bigger seafloor gas blowouts just east of New Zealand's subduction zone, including giant circular pockmarks 0.6 miles (1 kilometer) in diameter.
But subduction zone trenches are also deep, which means the gases unleashed during earthquakes may never reach to the surface. The sediments sampled at the Makran ridge were more than 9,100 feet (2,800 meters) deep. "Methane released at these water depths doesn't make it to the atmosphere," said Carolyn Ruppel, chief of the U.S. Geological Survey's Gas Hydrates Project in Woods Hole, Mass. "It's dissolved in the water column or it can be oxidized by microbes in the water column," said Ruppel, who was not involved in the study.
Yet even if methane from earthquakes doesn't reach the atmosphere, scientists are still interested in understanding how methane seeps and methane hydrates contribute to the ocean's total carbon levels. (Methane eventually is converted into carbon dioxide in the ocean and the atmosphere.) The new study could help modelers better predict contributions from seafloor methane sources.
Watch: Tracking an Ocean of Carbon ]
"What we care about is the integrated global [methane] flux out of the seafloor into the ocean and we don't begin to know what that number is," Ruppel said.