In Brazil, the snow fell

In three states in the south of Brazil, has been heavy snowfall. Unexpected snowstorm swept through the 90 settlements of the country. In the mountainous region of Santa Catarina, the air temperature dropped to the level of -7 ° C.

In the city of Curitiba was no snow since 1975. In the vicinity of the capital of the State of Santa Catarina - the city Florianopulis - blizzard happened for the first time in 29 years. Moreover - subzero temperatures and snow were observed not only in the southern regions of Brazil

As sunrise brings fresh light to the aftermath of strong storms in southern Kansas from Tuesday night, authorities are beginning to assess the toll.

Hail as large as baseballs was reported in east Hutchinson, according to Reno County Emergency Management. Winds estimated as high as 100 miles an hour were reported in southern Reno County near Pretty Prairie. The town itself was hit hard by hail and strong winds, knocking down trees and blocking streets.

“Please Please Please stay away from Pretty Prairie for now. They are not letting people into town at this time,” a post on Reno County Emergency Management’s Facebook page implored.

A hail stone measuring 4.75 inches in diameter fell near Yoder in eastern Reno County and hail as large as tennis balls was also reported.

More heavy rain strong winds struck Argonia in Sumner County Tuesday night, which was still picking up the pieces from Monday night’s microburst storm that ripped portions of the roof off the high school and elementary school.

Officially, Wichita recorded 1.02 inches of rain, according to National Weather Service meteorologist Eric Schminke. But heavier amounts were reported elsewhere in the city – including an inch of rain falling in just a half-hour at Central and Ridge Road in west Wichita.

Substantial rain over each of the past two days in the Cheney Lake watershed area is likely to boost water levels at the lake. With the ground already saturated, runoff into the lake – which until recently was Wichita’s primary water source – should be considerable. 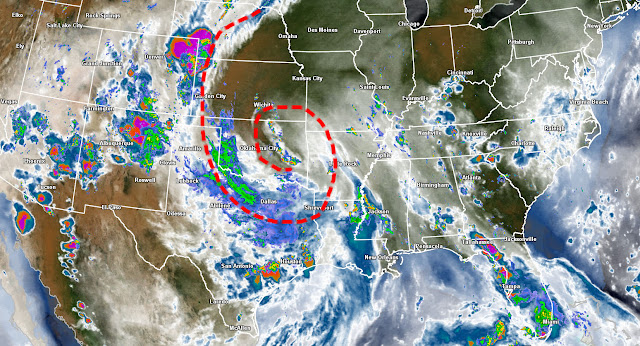 A low pressure system that started in the Eastern United States has retrograded under a ridge of high pressure to the north over the last couple of days.  This system is moving from east to west, which is extremely unusual for this hemisphere.  We’ve seen these move east to west for a short period of time, but this one will make it to Southern California by the time it weakens.

The upper level system is known as an easterly wave, however I’d like to call it a super easterly wave based on the distance it is going to travel.  This particular system will have traveled from one side of the country to the other once it has stopped moving west, diving from there into Mexico, gathering up monsoonal moisture to be put into Nevada and Southern California later in the week into next week.
Rainfall estimations across parts of Central Texas could be over 2-4″ of rain, with more rain (above 6+” possible in parts of South-Central Texas.  Severe storms, including tornadoes, hail, and damaging winds will be possible from Texas, New Mexico, and parts of Arizona through the next few days