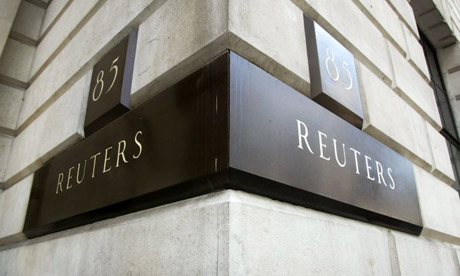 
Reuters' climate-change coverage fell by nearly 50% after a climate sceptic joined the news agency as a senior editor, a study has found.

The sharp decline in coverage since 2011, recorded by the Media Matters for America advocacy group, reinforces charges from a former staffer that Reuters cut back on climate stories under the influence of Paul Ingrassia, who is now the agency's managing editor.

Media Matters found a 48% decline in climate-change coverage over a six-month period, after Ingrassia joined the agency in 2011.

The New York Times and other news organisations have cut back on climate coverage, closing down blogs and redeploying correspondents, at times citing financial constraints. However, Bloomberg, Reuters' main competitor, has deepened its investment in climate change and sustainability coverage. The agency's founder, New York mayor Michael Bloomberg, has been a strong advocate for action on climate change.

Charges of an ideological component to Reuters' declining coverage – related to Ingrassia's personal doubts about established climate science – have sharpened concern in media and environmental as well as business circles, because of the agency's focus on financial news.

"It is just not responsible in our opinion to be cutting back on an issue that is having such a profound impact on every sector of the economy," said Mindy Lubber, who heads the Ceres sustainable business network, which represents companies and investors controlling some $11tn in assets. "This is a financial risk that needs to be looked at and addressed."

The Climate Progress blog has since criticised Reuters for injecting references in stories to fringe groups that reject established climate science, and represent barely 3% of scientists publishing on climate change.

The news agency did not respond specifically to the findings of a deep cut in climate-change coverage. But in an emailed statement, a spokesperson wrote:

"Reuters covers climate change closely both as a scientific and public-safety issue, as well as the impact of climate change on businesses, the economy and the markets. We have a dedicated staff, including a team of specialist reporters at Point Carbon and a columnist, who all generate significant coverage on the topic across our various platforms. We remain committed to providing fair and independent coverage of climate change that complies fully with our Trust Principles."

The scrutiny of Reuters' climate-change coverage began earlier this month when David Fogarty, the former Asia Climate Change Correspondent , wrote in a blog post that climate-change coverage had been dramatically cut back after Ingrassia's hire. Fogarty, a 20-year veteran at Reuters, covered climate change for four and a half years. But early last year it became increasingly difficult to get climate-change stories published. Editors suggested he pursue other stories. Then Fogarty described a conversation with Ingrassia, then deputy editor, at a social event.

"In April last year, Paul Ingrassia [then deputy editor-in-chief] and I met and had a chat at a company function. He told me he was a climate-change sceptic. Not a rabid sceptic, just someone who wanted to see more evidence mankind was changing the global climate.

"Progressively, getting any climate change-themed story published got harder. It was a lottery. Some desk editors happily subbed and pushed the button. Others agonised and asked a million questions. Debate on some story ideas generated endless bureaucracy by editors frightened to take a decision, reflecting a different type of climate within Reuters – the climate of fear.

"By mid-October, I was informed that climate change just wasn't a big story for the present, but that it would be if there was a significant shift in global policy, such as the US introducing an emissions cap-and-trade system. Very soon after that conversation I was told my climate change role was abolished."


Fogarty left the agency soon after.
Posted by seemorerocks at 19:40