Bradley Manning's 'sole purpose was to make a difference', lawyer insists
In closing arguments, defence lawyer paints portrait of Wikileaks source as someone without 'evil intent' 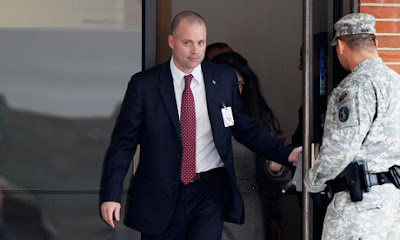 
The lawyer representing the WikiLeaks source Bradley Manning has asked the judge presiding over the soldier's court martial to decide between two stark portrayals of the accused – the prosecution's depiction of him as a traitor and seeker of notoriety, and the defence's account that he was motivated by a desire to make a difference in the world and save lives.

Over four hours of intense closing arguments at Fort Meade in Maryland, David Coombs set up a moral and legal clash of characterisations, between the Manning that he laid out for the court, and the callous and fame-obsessed Manning sketched on Thursday by the US government. "What is the truth?" the lawyer asked Colonel Denise Lind, the presiding judge who must now decide between the two accounts to reach her verdict.

"Is Manning somebody who is a traitor with no loyalty to this country or the flag, who wanted to download as much information as possible for his employer WikiLeaks? Or is he a young, naive, well-intentioned soldier who has his humanist belief central to his decisions and whose sole purpose was to make a difference."

Coombs answered his own rhetorical question by arguing that all the evidence presented to the trial over the past seven weeks pointed in one direction. "All the forensics prove that he had a good motive: to spark reforms, to spark change, to make a difference. He did not have a general evil intent."

Coombs ridiculed the prosecution case as a "diatribe" and said that its account of his client as someone who only cared about himself as the opposite of the truth. "He is concerned about everybody, he is concerned to save lives."

The lawyer continued: "He felt were were all connected to everybody, we had a duty to our fellow human beings. It may have been a little naive, but that is not anti-American, it is really what America is about."

The closing arguments presented over two days in the courtroom at Fort Meade have emerged into a clash of visions about the nature of leaking of official secrets in the digital age. At the centre of the battle is Manning himself, a diminutive figure in military fatigues, who has sat silently throughout.

With the end of the evidential stage of the trial, it now falls to the Lind to make sense of these two starkly conflicting pictures and reach a verdict that could come within days. Sitting without a jury at Manning's own request she must now decide whether the soldier is guilty of 21 counts that could see him detained in military custody for life without any chance of parole, plus a total of 154 years for itemised offences.

The soldier has already admitted to transmitting hundreds of thousands of documents to WikiLeaks, and to a lesser version of the charges that carry a maximum sentence of 20 years in jail.

The most serious charge against Manning, carrying a possible life sentence, is that he "aided the enemy", specifically al-Qaida, by passing intelligence to WikiLeaks which then made it accessible on the internet. In prosecution closing arguments, the government alleged that because of Manning sensitive US state secrets had been found in the possession of Osama bin Laden the day the al-Qaida leader was killed.

He cited the US government's own counter-intelligence report on WikiLeaks that described the organisation as being motivated by a desire to hold governments accountable to their people. "That is the watchdog function of the press – that is what the press is designed to do," Coombs said.

The "aiding the enemy" charge is the most contentious aspect of the Manning trial. It has provoked a wide debate about its possible impact on press freedom in the US, with first amendment advocates warning it could spread a chill across investigative reporting.

Coombs made his comments within that context, implying that to hold Manning guilty of helping al-Qaida by dint of having leaked to a news organisation would set a dangerous precedent. "Giving something to a legitimate news organisation is the way we hold our government accountable. Giving information to the world, to inform the public does not give intelligence to the enemy," he said.

Contrary to the prosecution's claim that he was indiscriminate in his leaking, Coombs said that Manning was careful to be selective in his choice of documents, weeding out "humint" reports that gave specific details on human sources on the ground and focusing instead on civilian loss of life such as the Apache video. "If he was a traitor who wanted to hurt the US, you would have seen a lot more indiscreet disclosures," he said.

The defence attorney also tried to undercut prosecution allegations that the more than 700,000 documents Manning leaked were damaging to the US. The soldier faces several counts under the 1917 Espionage Act accusing him of leaking intelligence "with reason to believe such information could be used to the injury of the United States or the advantage of any foreign nation".

Coombs attempted to counter those charges by arguing that in fact the WikiLeaks disclosures had very limited impact on US interests. The more than 750 files on Guantanamo detainees were "not worth the paper they were written on", the lawyer said, adding they were intended for background information and were riddled with inaccuracies.

The war logs from Afghanistan and Iraq were historical documents that recorded past battlefield events that could not provide useful intelligence to the enemy given how rapidly tactics on both sides changed in a military conflict. "The harm that could have been done is like Chicken Little yelling the sky is falling down," Coombs said.

In the most emotive scenes of his closing arguments, Coombs played to the court three clips from the video Manning uploaded to WikiLeaks of a 2007 Apache helicopter attack in Baghdad. The clips showed a group of civilians, that included two Reuters correspondents, being mowed down from aerial bullet fire.

Coombs asked the judge to watch the video "from the standpoint of a young man looking at eight people and what we know now to be the truth – there are two reporters there – standing on a street corner and being shot like fish in a barrel … You have to view that through the eyes of a young man who cared about human life."