Protest against the GCSB Bill 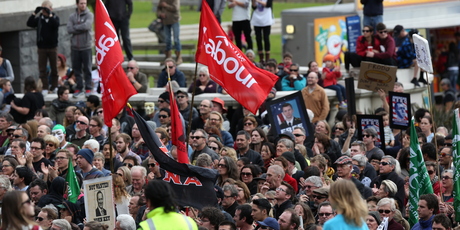 Kim Dotcom's recognisable figure looms head and shoulders above a crowd of several thousand people gathered in Auckland's Aotea Square this afternoon to protest extensions to the powers of the Government's spy agency.

Protests were held in 11 towns and cities around the country today.

Traffic was at a standstill in central Auckland as protestors, many wearing masks and waving signs, spilled across the streets.

Police were diverting traffic away from the area.

Labour Party leader David Shearer said it would be an "uphill battle" to stop the passage of the GCSB bill.

"It'll be difficult to do but we'll do everything we can to oppose it.

"There's now a lack of confidence by New Zealanders in our intelligence agencies," he said.

Another speaker at the Auckland march was Dr Rodney Harrison, QC, who called the planned legislation the "Dunne Deal" - referring to the United Future MP.

In Wellington, more than 500 protesters held up buses and cars as they marched in a crowd more than 200m long from Cuba St to the steps of Parliament.

Many wore masks or held signs aloft as they chanted "we don't want your spying state'' and "surveillance is for war" as they marched along Willis St and Lambton Quay.

They were met at the steps of Parliament by speakers including Green Party co-leader Russel Norman, Labour MP Chris Hipkins and Council of Trade Unions president Helen Kelly.

Vikram Kumar, the chief executive of Kim Dotcom's new Mega website and the former head of Internet NZ, was met with a resounding "no'' when he asked the crowd whether they should be spied on for marching today.

"This was a country that stood up and said no to nuclear power, it said no to apartheid. And what do we say today? No!

Dr Norman called on everyone at the protest to file an Official Information Act (OIA) request with the GCSB asking how many people were at the rallies across the country today.

"Maybe if they're so tied up dealing with 10s of thousands of OIA requests, it might give them less time to go around spying on us with their special powers.''

"This sort of mass surveillance changes the balance of power in our society away from the people and towards the state.''

Mr Beagle said it was wrong to suggest people who had done no wrong had nothing to fear from surveillance.

"I believe in freedom of expression and freedom of association, for people not being scared into silence because they are being watched by Government spies.'' 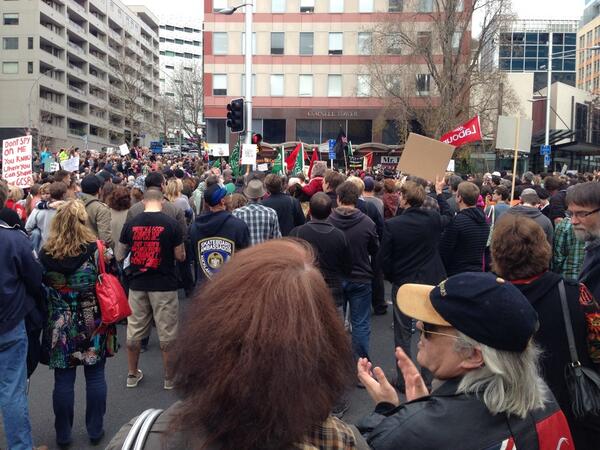 Quite a lot of ppl at GCSB protest in Wellington..... pic.twitter.com/iE43A9mroa 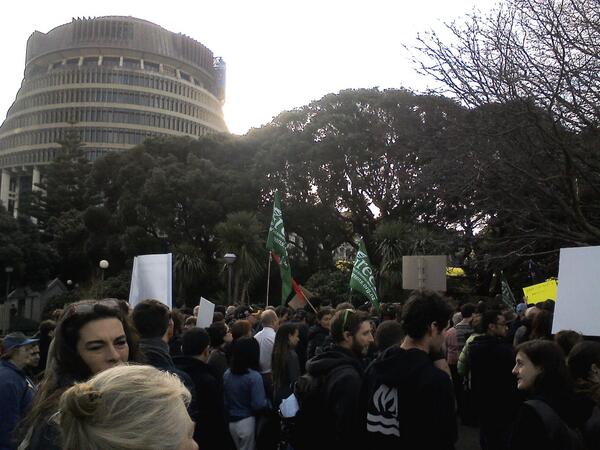