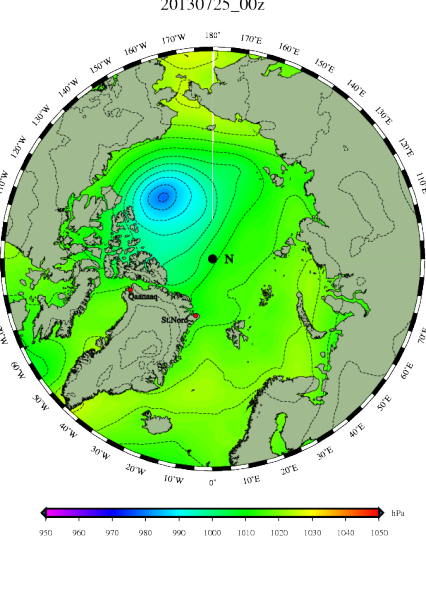 In a new incarnation of the Warm Storm event that has increasingly come to impact summer Arctic sea ice, a rapidly intensifying low pressure system formed Tuesday over the Beaufort, tracking directly through a large section of vulnerable ice and moving on toward the Canadian Archipelago. At its most intense the storm dropped to 977 millibars but has weakened slightly today to 980 millibars. The storm is expected to continue slowly weakening through today and tomorrow until finally fading by late Saturday or early Sunday.

Though strong, this storm is expected to be brief and is likely to not have the same impacts seen during the Great Arctic Cyclone of 2012. That storm approached the Arctic as an already well-developed system. Packing winds in excess of 60 miles per hour, it had the opportunity to rile a large section of open water and then fling waves as high as 10 feet up against the ice pack.
Though this particular storm has hosted gale force winds, they have mostly blown parallel to the ice edge and did not have the same opportunity to develop a longer fetch over open water. It is also worth noting that the Great Arctic Cyclone lasted for about two weeks while this most recent Sudden Arctic Cyclone is likely to last for only about four to five days. So ongoing effects are likely to be limited.
All that said, this storm should have some impact. Already, an increasing number of slats of open water are visible through large sections of the Beaufort and the ice edge appears to have been torn at like a large swatch of tissue paper might act when forcibly twisted. The ice this year is particularly thin and slushy, making it subject to much more rapid motion and deformation. So we are already seeing such effects.
The below image shows a section of central Beaufort sea ice just after the storm center passed. Note the cracked and more diffuse condition of the ice. 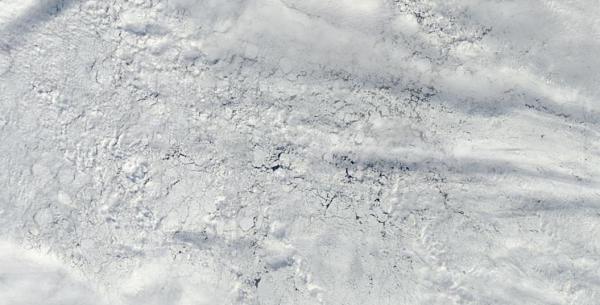 In addition to the impacts described above, warmer air and constant sunlight over the Beaufort have likely provided a number of reservoirs of heat energy for the storm to tap to melt and thin the ice. Cyclonic pumping will be able to dredge warmer, saltier waters from the bottom layer even as surface churning will mix both ice and water warmed by these cyclonic forces. Brine channels within the ice are more likely to activate now that summer has had the opportunity to soften up the ice, pushing an increasing number of patches above the critical -5 C threshold.
CICE model runs do show a substantial thinning of Beaufort sea ice over the next few days even as the thick sea ice remaining near the Canadian Archipelago is both shoved into narrow island channels and ablated toward the Fram Strait between Greenland and Svalbard. Note the shift of light blue to dark blue, and yellow and red to green in many regions indicating significant predicted thinning in response to storm conditions. The two meter ice line is seen to rapidly retreat into the Beaufort from near the Canada/Alaska coast and also from the Chukchi, East Siberian, and Laptev Seas. Meanwhile, the four meter ice line is slammed directly against the Canadian Archipelago as thicker ice is slammed against shores or jammed into the island channels:

In summary, we can expect these effects from this, rather strong, storm. Not likely to be as pronounced as GAC 2012 nor as ongoing as PAC 2013 (whose scars are still visible in the large region of melt in a wide triangle from the Laptev toward the North Pole). But this Sudden Arctic Cyclone will certainly leave its own mark on the 2013 melt season.

I initially read about this earlier this week in a post by a University of Ottawa professor. The title of his blog post, The Great Arctic Flush, was enough to cause concern. Reading his post only served to deepen that concern. There is potential that we could see major loss in sea ice over the next week...

Here is what he said then:
Within 2 weeks the Arctic Ocean will be completely transformed. The cyclone that appears 6 days out on both the US and European ten day forecasts will massacre the sea ice in what I call "The Great Arctic flush".

Now it appears the cyclone has begun and, as usual, is barely being covered by the media. I found one source discussing it today, Scientists watch Arctic cyclone chew up sea ice, and while this cyclone isn't as strong as the one that caused so much damage last year, the ice is much weaker than it was last year. So we could be in for a fairly major arctic event in the coming days.

Some choice quotes from the today's article linked above (bolding mine):
Arctic cyclones are driven by low-pressure systems in which winds of up to 100 km/h blow counter-clockwise in spiral more than 1,000 kilometres across. They occur in both winter and summer, but are usually stronger in winter.

Cyclones are not unusual in the Arctic, but seem to be changing in recent years, said David Barber, one of Canada's top sea-ice experts.

"These cyclones are not getting more frequent, but they are getting deeper — which means stronger," he said.

And they're getting harder on sea ice, which they break up through wave action associated with high winds and through rainfall, which darkens the ice and makes it absorb more solar energy. The storms also bring up water from the depths, which is actually warmer than surface water.

Cyclones can destroy large amounts of ice very quickly.
"We have a whole new class of sea ice in the Arctic, which we're calling 'decayed ice,'" he said.

Barber said the research icebreaker CCGS Amundsen can do 13.5 knots in open water. Through decayed ice, it can do 13 knots.


There's another storm brewing in the Arctic, the second this year after PAC-2013, the persistent Arctic cyclone that stayed in place for weeks on end and caused the first half of the melting season to be very slow. And also the second storm after last year's Great Arctic Cyclone, the iconic image of which is shown to the right (source: UCAR's AtmosNews).

The ice pack will probably be able to withstand the storm better than last year because there's more ice and it looks less patchy. Besides, the storm is occurring two weeks earlier, and won't match GAC-2013 in duration or magnitude. Nevertheless, this as of yet unnamed storm (a tradition we're trying to startover here on the ASIB) will probably become intense enough to leave a mark on the ice, which is why I decided to dedicate a blog post to it.

To see what we're talking about, here's the SLP map from the Danish Meteorological Institute, with the cyclone in question, getting ready for two big days: I made this panel that shows the ECMWF weather forecast for the coming 4 days (click for a bigger version):

The cyclone will peak tomorrow, or maybe I should say bottom out, at around 980 hPa. This is still pretty low, but not as low as last year's 963 hPa, of course. On Thursday the core will still have a pressure of about 985 hPa. After that the storm fizzles out rapidly. As things currently stand the ice pack will suffer the effects of this storm for two-three days. It will be interesting to see how the stubborn ice in the Beaufort Sea holds up.

I will update the post when interesting things occur, like flash melting.
---
Update 1, July 24th
According to the Environment Canada MSLP Operational Analysis Charts the storm has reached a low of 977 hPa so far, and the high over Greenland is at 1031 hPa (click for a larger version): 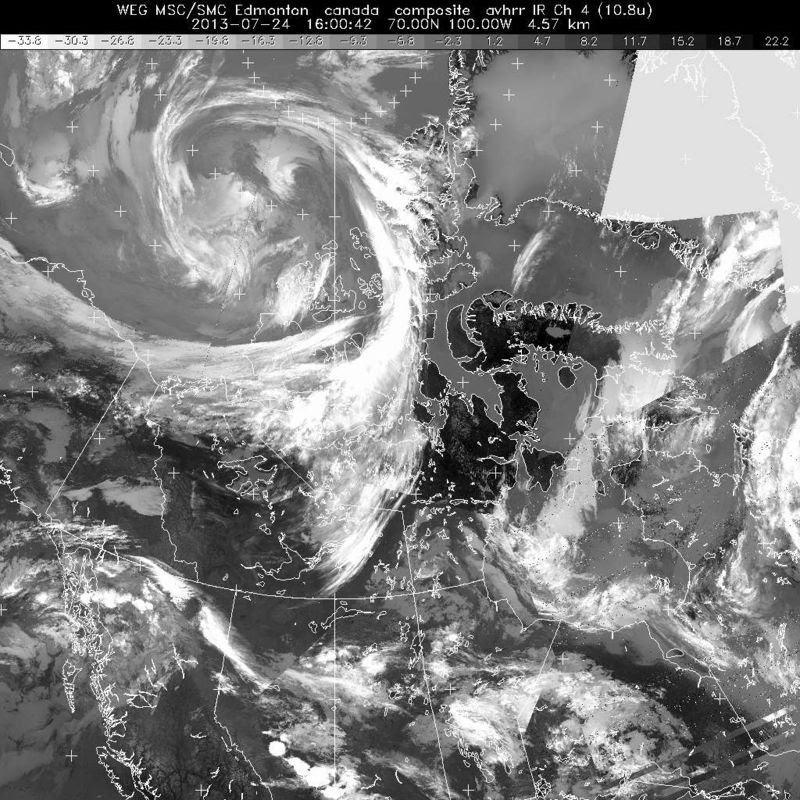 Update 2
Here's how it looks on the DMI SLP map: 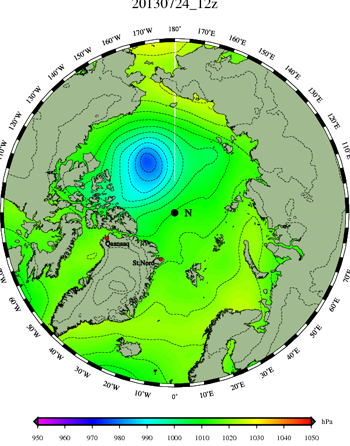